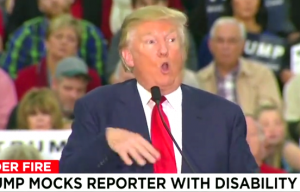 A Change.org petition is circulating asking the Electoral College to make Hillary Clinton president. It has gotten 4.36 million signers so far, and it’s aiming to get 4.5 million. The petition reflects the fears of at least half the country over Donald Trump’s apparent win in the November 8 election.

Trump’s win in the electoral college unleashed an unprecedented wave of racial and ethnic intimidation across the country, with perpetrators emboldened by Trump’s racially and ethnically-charged campaign, which won him an endorsement by the KKK.

On November 10th, a video was posted online showing white students in the cafeteria at Royal Oak Middle School in Royal Oak, Michigan, chanting “Build the wall! Build the wall!” while Latino classmates cry.  Teachers are alarmed that kids are waving their hands around and making fun of disabled people the way Trump mocked a disabled reporter during his campaign. An unusually large number racial threats and intimidation have been reported nationwide since the election. The Southern Poverty Law Center recorded over 200 incidents of election-related harassment and intimidation by November 11, just three days after the election.

Yet another strong indicator of the deep trouble the country is in is that Trump just appointed Steve Bannon his “chief strategist.”

Who is Steve Bannon? 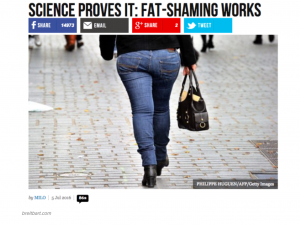 Article published by Breitbart News that encourages fat-shaming of women, the way Trump did to the former Miss Universe, Alicia Machado

You might want to sit down before you read this.

Steve Bannon is the executive chairman of Breitbart News, a far right wing commentary website known for championing the views of the “alt-right,” a white supremacist fringe ideology that has raised alarm bells for its chest-pounding, race-baiting, and anti-Muslim positions. Breitbart and the so-called Alt-Right oppose multiculturalism, immigration, feminism and have a disdain for diversity. Breitbart News has carried articles with headlines saying “Birth Control Makes Women Unattractive and Crazy,” “The Solution to Online ‘Harassment’ Is Simple: Women Should Log Off,” “There’s No Hiring Bias Against Women in Tech, They Just Suck at Interviews,” and “Bill Kristol: Republican Spoiler, Renegade Jew.”

Breitbart News repeatedly publishes objectively false claims about the LGBTQ community, the Muslim community, immigrants, and others. Click here to see a Buzzfeed article detailing the hateful articles that Steve Bannon has published on Breitbart.

Steve Bannon is SO far out on the right wing fringe that Glenn Beck, who is a right wing nightmare in his own right, called Mr. Bannon “a nightmare” and “quite possibly the most dangerous guy in all of American politics.”

People believe the Electoral College is the last firewall standing between the U.S. remaining a tolerant, respectful country that stays true to its founding principle that everyone is created equal, or a country that openly displays hatred, bigotry and racism.

The change.org petition states in part,

Mr. Trump is unfit to serve. His scapegoating of so many Americans, and his impulsivity, bullying, lying, admitted history of sexual assault, and utter lack of experience make him a danger to the Republic.

Secretary Clinton WON THE POPULAR VOTE and should be President.

Hillary won the popular vote. The only reason Trump “won” is because of the Electoral College.