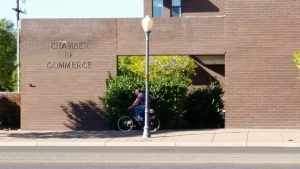 The G.J. Chamber gets unfavorable reviews from members on its political involvement

The website of the Grand Junction Area Chamber of Commerce says “We take the lead in shaping laws that affect business on the western slope,” but according to a new chamber survey, only a tiny fraction of its members seem to think the chamber should be meddling in government affairs at all.

On October 12, the chamber sent out a survey to its approximately 1,500 member businesses. Only 15 percent of its members responded to it.

One question on the survey asked whether “being the voice of business with government” should be a priority for the chamber. Only 39 percent of the small percentage of business owners who responded said “yes,” showing very few chamber members think the chamber should meddle in government at all. What’s more, fewer than half the respondents (48%) thought the chamber’s Government Affairs committee was even beneficial. According to the survey, only 67 of the chamber’s estimated total 1,500 member businesses said they joined the chamber “to have a stronger voice with government.” When asked about the most important issue business owners face today, not even 5 percent answered that the political environment was important to them.

Survey: Government Regulation Not a Problem for Most Businesses

G.J. Chamber-backed city council candidate Rick Brainard reflected poorly on the chamber’s choice of candidates after he was arrested for beating up his girlfriend in 2013

The results also showed that government regulation isn’t anywhere near the bogeyman the chamber has long claimed it is for local businesses.

A mere 2.8 percent of the tiny number of chamber members responding to the survey considered “increasing costs levied by government (i.e. taxes, fees)” to be a problem, and only 9 percent said they thought government regulations posed any problem at all.

By far most respondents considered the biggest problem to be the area’s overall economic conditions.

Interestingly, despite these results, the chamber hasn’t even bothered to address the single biggest economic driver to benefit the state in decades, even as the extractive energy markets remain in sharp decline: legal marijuana commerce, now a billion dollar business in Colorado.

The survey results, and many respondents’ comments, indicate the chamber might do better if it reined in its negative rhetoric about “government interference,” too many taxes and fees, and eliminated future efforts to influence elections. The chamber should also consider making an effort to bring in proven economic drivers to the area, like legal pot, that don’t interfere with, and could even boost the fortunes of existing businesses.

Below are comments the chamber received on its survey regarding it’s political involvement. They indicate a clear dissatisfaction with the chamber’s political stances and meddling:

-“I don’t always agree that candidates the Chamber backs are the best for business.”

-“I feel the chamber can be too political and not represent all members.”

-“The Chamber is way too opinionated. I don’t need to be told how to vote.”

-“I disagree with the suit against the Drainage District.”

-“GJ Chamber should represent all business views not simply conservative.”

-“I know politics directly impacts business, but feel we sometimes get too political, fine line I know.”

-“Gets too political at times.”

-“I would like to see a more balanced political perspective coming from the Chamber. I am a conservative, and work within the environmental compliance field. I don’t agree with all Federal regulations, by any means, and do recognize overreach in some areas, but there is always an overtone coming from the Chamber as well as local gov’t officials that suggests all regulations are bad and detrimental to the economy. This is just not true. And in many ways, this also plays into the hands of the liberals and promotes their agenda/mantra that conservatives and republicans don’t seek a balance between development, natural resource procurement, environment (natural, cultural, biological resources), and the other things that make life on the Western Slope great.”

-“Short of very satisfied, mainly because at times a little too political in mission.”

-“I don’t believe the Chamber is representing all businesses. I also don’t agree with the Chamber’s stance on endorsing candidates.”

-“You lack creativity in business development due to spending to much time and needed resources opposing the Drainage District forced actions. You should have a voice in local politics but it should not be one of your main activities. You should remember a number of the Chamber members are not Republican and as a result their interests should be acknowledged as a part of your political platform. You listened to the radical Tea Party blowhards in their opposition to National Park status for the Monument. Had that occurred the economic benefit would have exceeded ten million dollars more than all of the economic benefits the Chamber and Economic Development Council current projected business development. The Park status would have cost less than $10,000 compared to the high cost of incentives to bring businesses to Grand Junction.”

-“Chamber does not represent my business.”

-“They are to political and do not represent my views.”

-“I do not always agree with the Chamber’s political stance. I feel that we need to be more proactive in diversifying our economy so we are not so dependent on mineral extraction.”

-“Endorsing candidates is too political for the Chamber. You tend to alienate many in your membership. I know of several who have dropped over this single issue.”