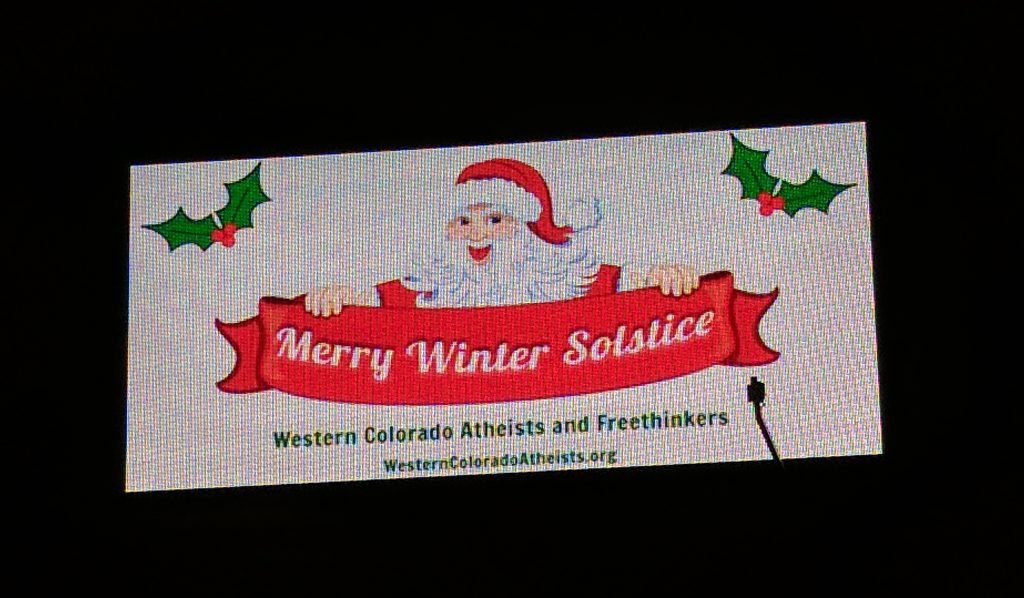 Billboard celebrating the 2016 Winter Solstice graces I-70 B, in front of Chick Fil-A and Hobby Lobby. The board will be up until December 26th.

Grand Junction’s growing secular community wishes people well this holiday season with a bright, 12 x 24 foot digital billboard on I-70 Business Loop that says “Merry Winter Solstice.” The digital billboard is by the Rimrock Marketplace, in front of Chick Fil A, a fast food chain with a history of anti-LGBT activism, and Hobby Lobby, a craft store with a reputation of catering to an evangelical clientele. The board runs until December 26th and was purchased by the members of Western Colorado Atheists and Freethinkers, a local nonprofit group whose mission is “to inform and educate the public in Western Colorado about atheism,” and “promote acceptance of atheism as a valid, rational belief system.” WCAF also advocates for separation of church and state, and has served as a sounding board, exposing and confronting illegal religious proselytizing in public schools and local governments on the western slope. WCAF also gives western Colorado’s atheists, agnostics, freethinkers and humanists a way to connect with each other, share information, enjoy social activities, develop new friendships and enjoy freethinking conversation. It is the oldest secular advocacy organization on the western slope, and will celebrate its 10 year anniversary in February, 2017. WCAF will hold a winter solstice gathering on Thursday, December 22 at Freeway Bowl. The event is open to all area residents who don’t believe in God.

WCAF is a registered 501(c)3 nonprofit group with the IRS, and a registered charity in good standing with the State of Colorado. All donations to WCAF are tax deductible. To donate, click here.