The first week of Donald Trump’s presidency has made one thing clear: Americans must start considering Mr. Trump’s mental health a serious problem.

There are no two ways about it: Mr. Trump has exhibited inappropriate behaviors this week, repeatedly, raising concerns across the country about his mental status and ability lead, and Americans are getting alarmed.

Specifically, Mr. Trump has continued to lie to Americans, attributing his loss of the popular vote to his imaginary conclusion that millions of unauthorized immigrants voted for Clinton illegally in the November election. Mr. Trump restates this conclusion even after being informed that it is not even remotely possible. Mr. Trump also keeps insisting that he had “the biggest crowd in the history of inaugural speeches,” despite photographic evidence to the contrary.

Mr. Trump’s obsession with his own popularity is unnerving at best, freaky at worst. And it’s getting more and more inappropriate.

In an interview with David Muir broadcast last night, Mr. Trump, discussing a speech he gave in front of the CIA’s memorial wall January 21, boasted to Muir that his speech was a “home run.” He insisted that people attending the speech were “applauding and screaming” for him. Trump said,

Trump kept on going in this vein, telling Muir that if a poll had been taken of the 350-person audience to gauge his CIA speech’s greatness, “the result would have been ‘350 to nothing'” in his favor.

During his speech at the CIA, Mr. Trump again discussed the size of the crowd at his inauguration, the size of his rallies, Time magazine covers and how unfairly he feels the media has treated him — obsessing on himself while standing in front of a solemn wall commemorating the deaths of 117 CIA agents who were killed in the line of duty.

For weeks newspapers have given Mr. Trump the benefit of the doubt, using terms like “falsehood” or “erroneous statements,” to describe his far-out claims and fact-free statements. But enough is enough. Now major national publications have started calling Trump’s lies “lies,” reporting on his overbearing obsession with his personal popularity and other problems his personality and behavior are causing in the country.

On January 22, the Atlantic published an article titled “Alternative Facts: The Needless Lies of the Trump Administration.” 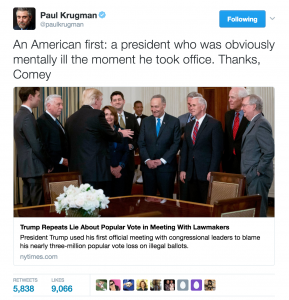 Today, the day after Trump’s interview with David Muir, the Washington Post published an article titled, “In his first major TV interview as president, Trump is endlessly obsessed with his popularity.”

Also today, the Washington Post published an article titled “Trump just gave a remarkable new interview. Here’s a tally of all of his lies.”

These are not the kind of articles a new president should be generating in national publications, and they are certainly not the kind of information that cultivates trust among the American people.

Trump’s compulsive lying and obsessing on himself are bad for the country and highly detrimental to his credibility, and a time when he should be building cache’ and respect among Americans, encouraging national unity and cultivating respect among foreign leaders. Instead, Trump has been doing the exact opposite: acting like an attack dog, picking fights with everyone from celebrities to citizens of California and the president of Mexico, inciting anger and resentment among foreign leaders and whittling down what shred of respect he still had when he assumed the presidency.

We have to admit it: Trump’s behavior is insane, harmful and damaging. It’s causing upheavals at home, alienating our allies and and causing fear and around the world.

It’s obvious that Trump is not mentally well, reportedly even to some Republicans in Washington who have been quietly talking about it amongst themselves, and the rest of us have to start talking about it too, and expressing our thoughts to our elected representatives. His behavior is problematic, irrational and wholly unfitting for a president of the United States, and we must acknowledge it and stop excusing it. In any other American, behavior like Trump’s would be a vexing problem for friends, family and co-workers. Maybe they could live with it, try to get help, or leave. But in an American president, this behavior can have, and is already having, massively disastrous consequences.

We can only hope that some members of Congress will admit we have a terrible problem on our hands with Mr. Trump, and that at least some of them, whether they are Democrat, Republican or independent, will have the clarity of vision and personal strength to speak out about the negative effects Mr. Trump is having on our country and the world, only one week into his presidency.