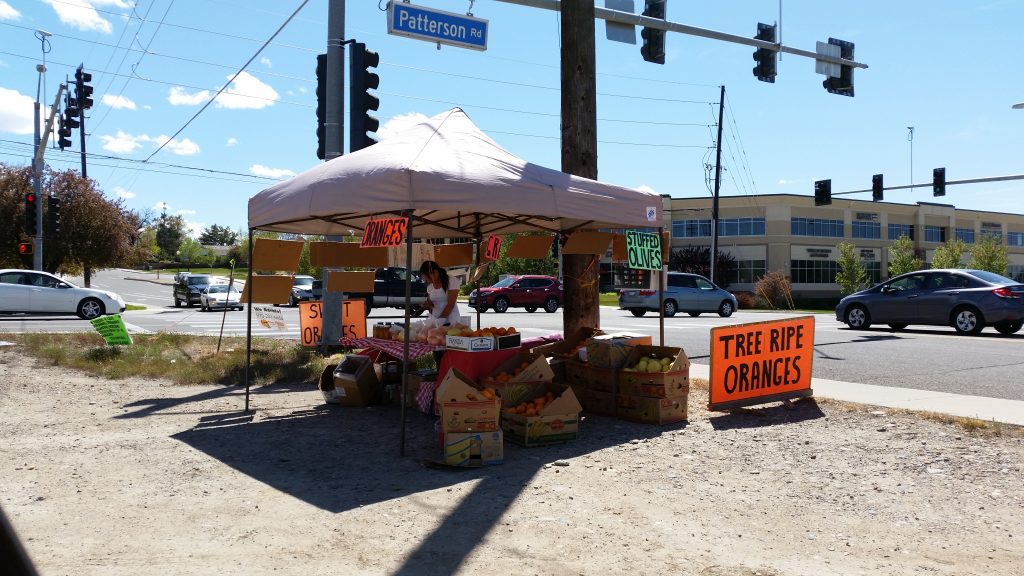 The Citrus Gypsies’ booth at First Street and Patterson Road

The Citrus Gypsies are those wonderful people who for the past three years have been driving down to Arizona, picking up the sweetest, juiciest oranges, grapefruits, lemons and pomelos and other goodies from a long-established orchard in Arizona, driving it up to Grand Junction and selling it at two booths, one at the corner of First and Grand Ave., and the other at Patterson and First Street.

This is the best citrus around, folks, far better than what you get at the local grocery stores. The Citrus Gypsies make multiple trips back and forth to Arizona during the latter part of the winter and they get fruit from the same orchard each time, so with every trip they make, they bring back fruit that has been on the trees longer, and that is even riper and juicier. They make several trips throughout the season until the citrus harvest is done, and then these great folks disappear until next year.

Depending on what’s available in Arizona, they also sometimes have avocados, fresh pecans in the shell, honey made from bees that live around the orange orchards and a few other products as they can obtain them, like olives.

So don’t miss out! Stop by one of the Citrus Gypsies’ booths and grab some of the best fruit the southwest has to offer.

They also mentioned that they are interested in renting a furnished or partly-furnished place for 3 weeks or so while they’re here selling their current batch of fruit. They’d just like access to a kitchen so they can cook their own food. If you have a place you’d like to make available to them, or know of such a place, stop by their booth and let them know.

3 comments for “The Citrus Gypsies are Back!”