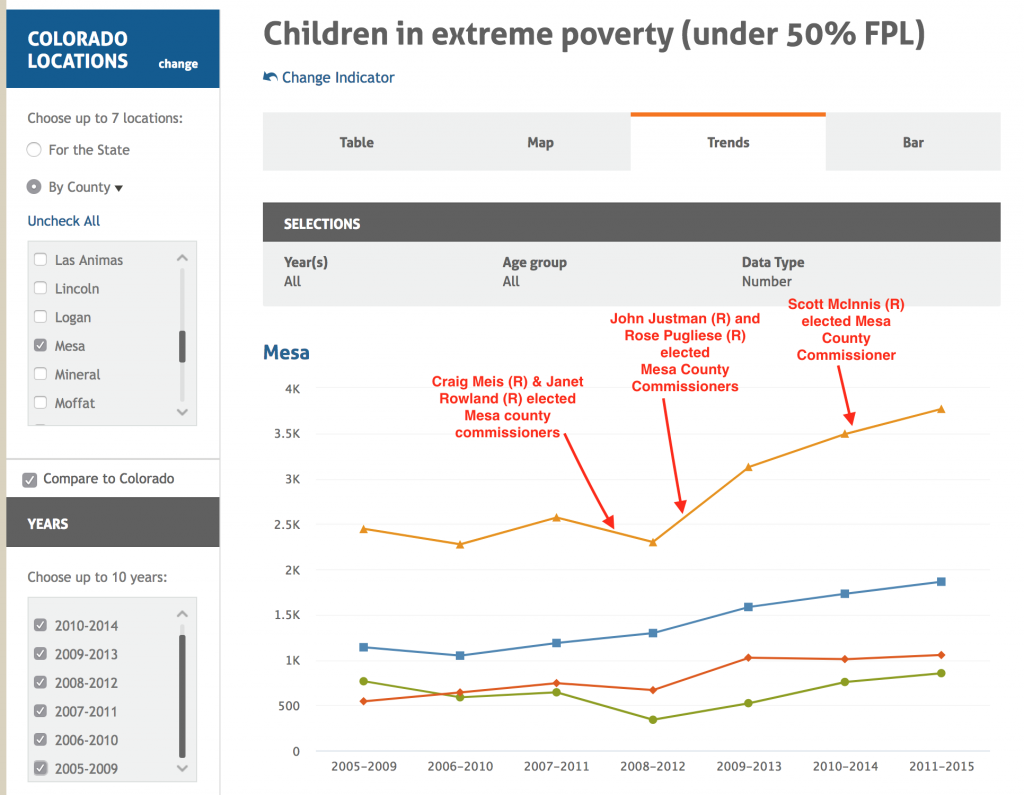 The number of children in extreme poverty in Mesa County has skyrocketed under a Republican-dominated Board of Mesa County Commissioners. (FPL= Federal Poverty Level. A family of four is at the federal poverty level if they make an income of $24,600 in 2017. Under 50% of the FPL would be about $12,600/year. (https://aspe.hhs.gov/poverty-guidelines) Chart available (without red annotations) at Colorado Children’s Campaign.

When was the last time a Mesa County Commissioner or a state-level elected official from Mesa County gave a public statement about the skyrocketing number of families and children suffering from extreme poverty in our county, or proposed possible solutions to the problem?

Poverty is a touchy topic for Republicans.

Republicans tend to view poverty as the fault of the poor, or blame it on the government, or both. They link poverty to laziness and believe poor people prefer being dependent on programs like Welfare and food stamps.

In 2012, Mitt Romney gave a clear example of how Republicans think about poverty when he said:

“There are 47 percent of the people who will vote for the president [Obama] no matter what. All right, there are 47 percent who are with him, who are dependent upon government, who believe that they are victims, who believe the government has a responsibility to care for them, who believe that they are entitled to health care, to food, to housing, to you-name-it. That that’s an entitlement. And the government should give it to them. And they will vote for this president no matter what…These are people who pay no income tax.”

Romney went on: “[M]y job is is not to worry about those people. I’ll never convince them they should take personal responsibility and care for their lives.”

Conservatives believe that poverty ends by making rich people richer. In return, they believe, the rich will spend more money, which will stimulate the economy and create more jobs for poor people. That’s why conservatives believe economic policies should be aimed at making wealthy people even wealthier, and that’s how everyone will benefit.

Democrats have a more bottom-up view of how to address poverty. They believe that more opportunity and equality will reduce poverty, for example by making debt-free college a reality, ending systemic racism, treating mental illness and considering health care a human right, treating workers with respect and generating higher-paying jobs through the advancement of new technologies, like renewable energy. 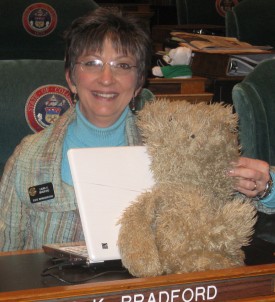 Rep. Laura Bradford (R-Mesa County) in the State Legislative Assembly with her teddy bear in 2010 (Photo courtesy of the Denver Post)

The last Democratic elected official who represented our area was voted out in 2008, when Bernie Buescher (D) lost to Laura Bradford (R) for the House District 55 seat by a margin of only about 600 votes. Bradford had a sewing business and no prior experience in government prior to being elected, but she directed her church’s handbell choir and was a devoted Republican. Buescher was a former CEO of West Star Aviation, had a law degree and was first elected to the Colorado Assembly in 2004. While in the legislature, he worked on expanding the Low Income Energy Assistance Program and legislation to use Federal Mineral Lease Revenues to create a “rainy day fund” for the State of Colorado. Buescher was recognized as “Legislator of the Year” by the Colorado Non Profit Association, The Colorado Economic Developers Council and the United Veterans Committee. He rose through the legislative ranks to serve as chair of the Joint Budget and Appropriate Committees and was on track to become the next Speaker of the House when Bradford beat him by about 1% of votes cast.

On January 25, 2012, Bradford was arrested in Denver for drunk driving and possession of a handgun in her car. She did not run for office again.

Despite the humiliating experience of having elected Bradford to the Colorado House of Representatives, Mesa County voters went full bore electing Republican representation at local and state levels after that, to terrible effect for the County.

In 2008, number of kids suffering in extreme poverty in Mesa County began to skyrocket, according to data from the Colorado Children’s Campaign. By 2013, Mesa County’s child poverty rate had almost doubled.

Today kids in Mesa County are still having a terrible time, according to recent news reports.

Things will stay tough for Mesa County’s poorer citizens until voters here are finally squeezed so hard and in so much pain that they will welcome new, more Democratic ideas. Right wing leadership and their old-fashioned ideas about poverty and trickle-down economics have proven over and over that they simply do not work for kids or families.