A federal court ruled July 25, 2017 that an elected official’s Facebook page is a forum for speech under the First Amendment to the U.S. Constitution and that blocking participants based on their viewpoints violates their right to free speech.

Three Grand Junction residents submitted a formal ethics complaint (pdf) to the state legislature August 15 about Colorado State Senator Ray Scott (R-District 7) for blocking them from his official social media accounts after they criticized his views.

The residents say Scott blocking them from his Facebook and Twitter accounts — which he created in his capacity as a public official to communicate with his constituents — violates their rights guaranteed under the First and Fourteenth Amendments to the U.S. Constitution, which assure Americans’ freedom of speech and equal protection under the law, respectively. The three also cite the July 25, 2017 federal court ruling in Davidson v. Loudoun County Board of Supervisors, a case with circumstances extremely similar to those in Colorado involving Scott, brought by a person who was banned from an elected official’s social media account for just 12 hours after he criticized her elected colleagues. In that case, the Court ruled the “elected official violated the First Amendment by engaging in viewpoint discrimination and banning Plaintiff from a digital forum for criticizing her colleagues in the County government.” The court stated that Supreme Court jurisprudence on the First Amendment is clear and unambiguous: “If it makes anything clear, … it is “that speech may not be disfavored by the government simply because it offends.”

The three citizens filed their complaint under Senate Rule 43 (pdf), which allows “any person” to “file a complaint with the [Colorado State Senate] President alleging misconduct involving legislative duties by a member of the Senate.” Others who have been blocked can file similar complaints by following the instructions in Rule 43 and submitting them to the Senate President, Kevin Grantham.

Scott’s response: “There’s nothing official about my social media accounts”

Ray Scott registered his Facebook page as a “Government Official.”

Scott told the Grand Junction Daily Sentinel that he’s “only hidden some ‘inappropriate’ comments from public view,” and he maintains “there’s nothing official” about his social media accounts. But Scott operates his Facebook as a “Government Official.” Scott also operates his Twitter page as a Government Official and he blocks people completely from his Twitter account if they post tweets he disagrees with. 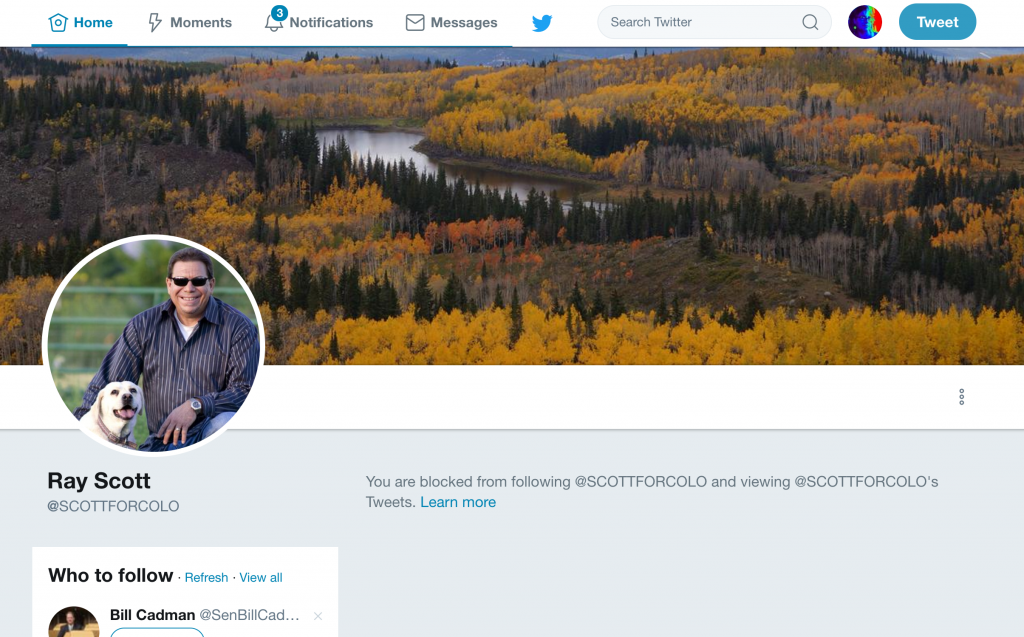 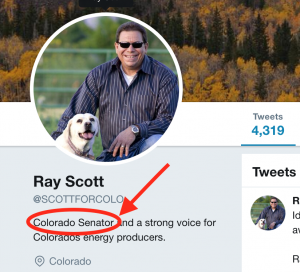 Just like Scott, the defendant elected official in the Davidson case also claimed her Facebook page was a personal page and not an official one. But the Court found that she operated her page “under color of state law,” that she operated it as a forum for speech, and in blocking people she engaged in viewpoint discrimination, thus violating the First Amendment to the United States Constitution.

Of course, Ray Scott could easily eliminate this controversy by unblocking all the people he has blocked on both his Facebook and Twitter accounts so they are free to comment, and by changing his Facebook setting to “Public” so everyone — even people without Facebook accounts — will be able to access it.