To give you an idea of exactly how much tax money Trump is demanding for his wall, let’s take a look at how much money $25 billion really is:

In addition, the only ones who thrive from building physical barriers along the border are smugglers, who merely become more creative at their trade and charge higher and higher fees to hapless, impoverished immigrants who are desperate for their services.

Beyond this, investigation reveals that a border wall would be futile given the way immigration and smuggling really take place.

People crossing the southern U.S. border illegally is not a major source of illegal immigration 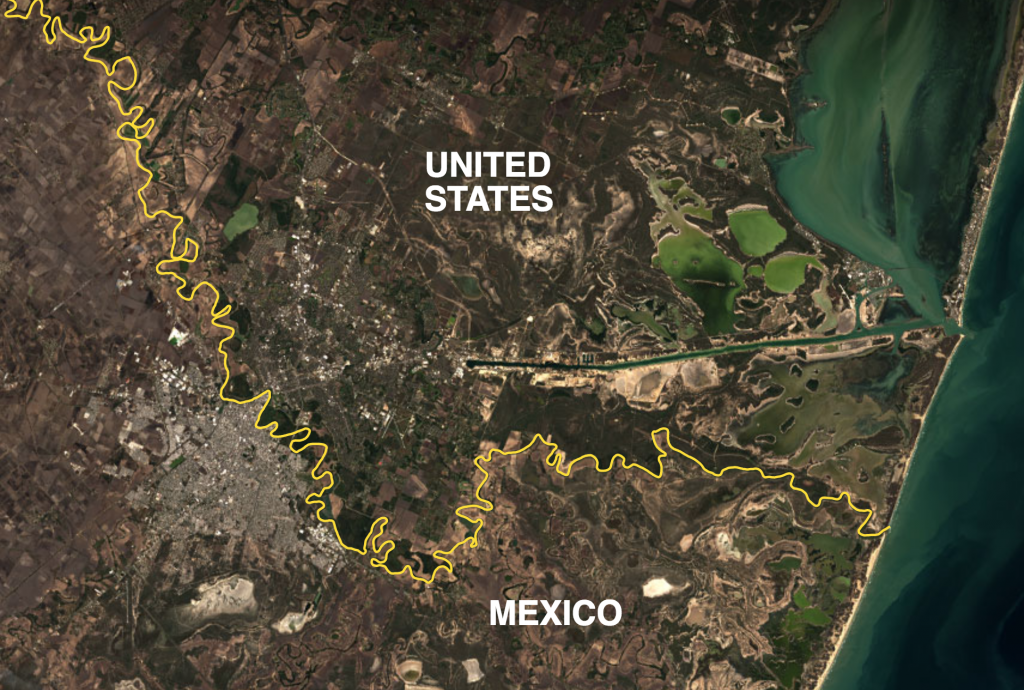 The U.S.-Mexico border along the Rio Grande River would require a wall along, or in the middle of the twisting, turning river

Trump claims a border wall is needed to stop terrorists from entering the country, but the Department of Homeland Security has no evidence that terrorist groups are organizing in Mexico and plan to cross the southern U.S. border. In fact, data shows between 1975 and 2015, only one foreign-born terrorist in the U.S. was from Mexico, and that person didn’t even kill anyone. Yet nineteen Saudi Arabian terrorists killed 2,369 Americans and two terrorists from United Arab Emirates killed 314 Americans within the same time span, but Trump isn’t proposing any restrictions on immigrants from these countries. Recall that the 9/11 attackers were all Saudis, and got into the U.S. using legal visas. So the idea that terrorists are flooding into the country from Mexico is not borne out by facts.

Treaty obligations, natural runoff routes and flood zones along rivers would  also require part of Trump’s wall be built inside the U.S. border, which would be awkward if Trump continues to demand Mexico pay for the wall, as he has promised. And Mexican officials have said unequivocally that they would not not pay for a wall. 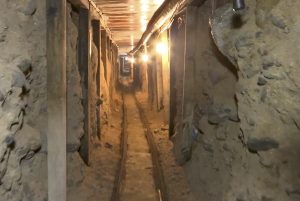 Tunnel under the border at Tijuana, with electricity and a railway. (San Diego Union-Tribune)

Building a wall would also show great contempt for our neighbor to the south, would poison our relationship with Mexico and likely end their cooperation in fighting smuggling activity, drug cartels and other criminal activities that require joint cooperation between the two countries.

Also, a significant part of the border between Mexico and the U.S. follows the tightly winding path of the Rio Grande River. In many places, a wall would have to be in the river itself, which is utterly impractical.

Tunnels, catapults, trucks and bribes…Oh, my!

Drug-throwing catapult attached to the Mexican side of the existing border fence (Photo: CNN)

Creative drug smugglers already use a multitude of strategies to circumvent existing border fences and walls, and they are constantly finding new ways to get over, around, through or under them.

Specially-designed, undetectable boats, air-powered cannons, catapults and drones are just a few of the ways smugglers get drugs into the U.S. from Mexico, but by far most of the contraband comes through formal border checkpoints between the two countries. The January 25, 2018  issue of the Texas Tribune contained an interview with a lifelong marijuana trafficker who said he moved about 50 tons of marijuana a year through official points of entry in 18-wheel semi trucks. He told the Tribune that a wall wouldn’t stop him. Smugglers also use “cloned” cars and trucks that have been modified to look exactly like federal vehicles. Former smugglers also point out that a significant amount of smuggling relies on border patrol agents who take bribes to allow contraband and people across the border.

A wall won’t stop any of that.

Smugglers also evade border barriers using tunnels. Since 2001, law enforcement officers have discovered more than 100 tunnels between the U.S. and Mexico, some of them quite elaborate, with electricity, ventilation, and wheeled carts. One tunnel was 2,400 feet long. Tunnels are hard to detect. Their discovery usually depends on word of mouth.

A wall will not stop tunneling.

The construction of physical barriers between the U.S. and Mexico has already proven to be a nightmare for private landowners along the southern U.S. border.

mistakenly paid people for property they didn’t actually own, and a huge number of transactions for land along the border have ended up in lawsuits for landowners who have the money to fight them.  Many people can’t afford the fight, and just give up their land to the government or take a pittance for it. The federal government is already facing a long list of condemnation cases from previous border-barrier efforts in which the government seized land without knowing who actually owned it. One U.S. court alone is currently facing a backlog of 320 eminent domain cases involving government seizures of private land along the U.S.-Mexico border. Some landowners have incurred huge legal debts just to correct mistakes the government made in seizing their land for a border fence.

The illogic surrounding Trump’s demand to build a border wall and it’s detrimental effects on the U.S. is clear. The nuances involved in border security render the idea little more than an expensive flight of fancy, but one  Americans will pay dearly for if Trump gets his way. Every American who believed Trump’s promise that Mexico would pay for a wall has been utterly duped. If Trump gets his way, the cost of the barrier will come out of all of our pockets, at the expense of America’s needs being left completely unaddressed.

It would be better to face reality and find less expensive and more rational and suitable solutions to problems posed by illegal immigration than to go along with Trump’s misguided, hare-brained border wall proposal.