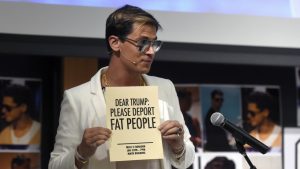 Yiannopoulos makes his living by staging high-profile talks in which he tries to provoke an incensed reaction from people on the social justice left and delight his disaffected hard right-wing fans. Yiannopoulos is the antithesis of a conservative intellectual voice, though. His arguments rely on insults and are remarkably thin on reason or substance. All he does is say vile, controversial things that target individuals or entire groups of people with nasty comments. Some examples:

His goal is to provoke a strong negative reaction from communities in which he appears, so he can claim left wingers are trying to deny him his right to free speech and portray himself as a victim.

Don’t fall for it. The best thing to do is ignore him.

Yiannopoulos is a British citizen and gay man who dropped out of college in 2000. He’s earned millions by being an attack dog for things and people he doesn’t like. He has consulted with neo-Nazis and anti-semites and made a name for himself by posting racist, misogynistic, and abusive content online. He denigrates fat people, trolls women on twitter, denigrates feminism, and insists homosexuality is a choice. Yiannopoulos was permanently banned from Twitter in July of 2016 after he spearheaded a racial abuse campaign against Saturday Night Live actress Leslie Jones after she starred in the 2016 re-make of the movie Ghostbusters. His 15 minute-long appearance at a “free speech” event at the University of California, Berkeley in 2017 cost the University $800,000 in security expenses and the protests against his talk caused $100,000 worth of damage to the campus, which may explain why organiers of his Grand Junction talk are keeping as a big secret the venue where he is speaking here in Junction.

And all of this is why the haters love him.

But Yiannopoulos is on his way out. Let him flame out.

The best reasons to ignore Yiannopoulos are 1) His career as a figurehead for hard-right wingers and white nationalists is already currently in tatters, and 2) to respond to him would be to take his bait and help him get his name into the news even more, which gives him the free exposure he seeks.

Why is he on his way out? 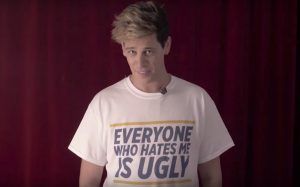 In early 2017, a video clip emerged of Yiannopoulos talking on a radio show in the latter part of 2016 in which he appeared to defend pedophiles and pedophilia. [Caution: there is lots of profanity and sexually explicit, offensive language in this video clip.]  Yiannopoulos denied being an apologist for pedophilia but nevertheless after the video got out, Breitbart News pushed Yiannopoulos out of his job as a writer and senior editor for their website. Then the 2017 Conservative Political Action Conference (CPAC) cancelled a high-profile appearance by Yiannopoulos in the wake of his pedophilia comments. Next, Simon and Schuster cancelled a $250,000 book deal with him over his comments as well.  All Mr. Y has left is public appearances for pricey tickets, because no one will sponsor him or pay an honorarium for his appearances any more lest they be accused of teaming up with someone who rationalizes pedophilia.

If this wasn’t the case, Yiannopoulos wouldn’t be booking appearances in little out-of-the-way towns like Grand Junction — where he hopes no one knows about the pedophilia commentary video — and where he is trying to scare up anywhere from $40 to $109 for a ticket — a huge sum for most people in this area. My guess is the high ticket prices for his talk will help depress turnout. Grand Junction ultra-right-wingers who are wealthy enough to buy tickets to Yiannopoulos, though, may also want to think twice about showing their faces at his event if they operate businesses in town. Those businesses could become targets of boycotts, which might be a better strategy for progressives in town than loudly protesting at Yiannopoulos’s event.

His appearance may not even happen.

Based on his recent track record, there’s a good chance Yiannopoulos may not show up for his gig here at all. He just cancelled an appearance scheduled in Scottsdale, Arizona on March 2 (today), leaving his fans hanging. Like his appearance planned for Grand Junction, this one was to be at an unnamed venue that was to be announced at the last minute. He was also supposed to give two speeches in the Phoenix area last fall, and he cancelled both of those. So the one he’s supposed to give here may not even happen.

Yiannopoulos is a nonsensical figurehead who thrives on insulting people and generating anger, division and controversy to get attention. Yiannopoulos is only a success because of the new Trump culture that embraces rudeness, vile insults and white supremacy. Since our town is a lot better than that, I suggest we all just yawn, ignore this guy, deny him the attention he seeks and let him continue his flaming downward spiral until he’s gone for good.