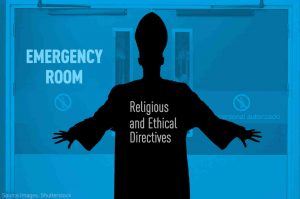 Religious hospitals restrict the types of care they offer, even in emergencies.

Nationally there has been great concern about the rapid takeover of hospitals nationwide by religious institutions, primarily by the Catholic Church, and the way it reduces access to health care options around the country.

Centura is a hospital management company that works for religious institutions, and it offers two options for the hospitals they take over: they can be run as either a Catholic or an Adventist hospital.

Make no mistake: Centura Health itself is a religious outfit as well. It is an Adventist organization. Their website states,

“Centura Health’s 21,000+ mission-centered professionals share our ministry and are guided by our Mission to extend the healing ministry of Christ by caring for those who are ill and by nurturing the health of the people in our communities.”

While we’ve been told that the Adventist option is not as restrictive as the Catholic option, the very idea that religious dogma rather than medical research would dominate all hospital care available to Mesa County citizens sends a chill down the spines of many are residents, particularly women.

Community would take the Adventist track, but it’s unclear exactly what the differences are between the two options. We do know, though, that both options are guided to an extent by the Ethical Religious Directives issued by the National Conference of Catholic Bishops (pdf).

These “Ethical Religious Directives” prohibit the use of contraceptives completely, only approving of a single “natural” contraceptive method, the “rhythm method,” which has a failure rate of between 10 and 25 percent. Because of this, scientifically-devised contraceptives with higher success rates, like IUDs, the pill, and barrier methods like condoms, are banned from these hospitals’ pharmacies. When a pregnant woman’s life or health is at risk, the Religious Directives demand that medical care favor the life of the fetus over the life of the woman. No intervention is allowed for ectopic pregnancies (when a fertilized egg implants and grows outside the uterus, for example in a fallopian tube, ovary or abdominal cavity).  Ectopic pregnancies can cause life threatening internal bleeding, but because the viability of a fertilized embryo may be threatened, religious hospitals prohibit taking any action to save the life of the mother that involves sacrificing the 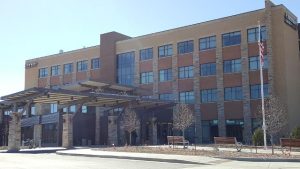 Community Hospital in Grand Junction is a non-religious hospital where currently the only concern about medical care is what is best for their patients.

embryo. Many religious hospitals refuse to provide emergency contraception, and some prohibit counseling in safe sex to prevent transmission of HIV/AIDS or sexually-transmitted diseases like gonorrhea or chlamydia. Abortion is never permitted in Catholic or Adventist hospitals, even in cases of rape or incest. Religious hospitals also have restrictions on end-of-life options, and refuse to honor end-of-life directives that contradict their religious teachings, such as advanced directives that patients use to tell their doctors they want artificial life support removed if they have no hope of recovering from a terminal illness. Colorado now as a Death with Dignity law that allows terminally ill patients to request life-ending medication, but most religious hospitals prohibit doctors from even telling patients about the law. In fact, religiously-affiliated healthcare institutions place “gag restrictions” on healthcare providers that prohibit them from giving patients information about health care services they may need, but that conflict with the institution’s religious beliefs. Employees of religious hospitals often can’t even tell patients where they go to can obtain such services.

Adventist hospitals do provide some birth control, tubal ligations and vasectomies, however. Currently, Community Hospital does provide emergency contraception, but this may stop if the merger happens.

Work restricted on the sabbath

Adventist hospitals postpone elective surgical, diagnostic and therapeutic services on from sundown Friday to sundown on Saturday (on their sabbath), and maintain only a minimum number of qualified people working in their emergency rooms on the sabbath. Non-essential activities like staff meetings are not held on the sabbath. Adventists also have dietary restrictions which do not allow pork, shellfish or alcohol to be served in their hospitals. (That means no bacon!) Adventists also avoid caffeine.

After the merger, Centura would require that the president and CEO of Community Hospital is an Adventist, so the hospital’s current CEO, Chris Thomas, will be out of a job within two years if the Community Hospital board agrees to the deal. He’d essentially be fired just because of his religion.

Also, Community Hospital currently has a 12 member board made up of local citizens. If the merger goes through, the 12-member board would be dumped in favor of a single board member who would sit on Centura’s board, so local representation on Community’s board would all but end.

Why is Community Hospital even considering such a merger at all? 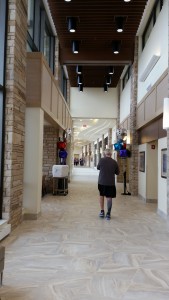 Community Hospital is $60 million in debt on it’s new building on G Road and is currently paying  8.75% interest on that loan. Also, 55 percent of women who deliver their babies at Community Hospital are on Medicaid, which pays the lowest reimbursement rates for medical care of any insurer. Community Hospital doesn’t make any money delivering babies, and they deliver around 600 babies a year. Ordinarily this wouldn’t be a problem, but Community is at a huge disadvantage compared to St. Mary’s when it comes to Medicare and Medicaid patients. That’s because Community gets a far lower reimbursement rate for Medicare and Medicaid patients than St. Mary’s.

The reason is because St. Mary’s somehow got a federal designation as a “Sole Community Provider,” even though one of the main criteria necessary to qualify for this designation is that a hospital not be within 35 miles of another hospital. St. Mary’s and Community Hospital are only about three miles away from each other, and in the past, before Community built it’s new building, they were even closer than that. Hospitals that have the “Sole community provider” designation get awarded and additional 12.9% in Medicare and 14% more in Medicaid reimbursements than hospitals without the designation. This puts Community Hospital at a bad disadvantage financially compared to St. Mary’s. Community CEO Thomas says either both hospitals should get the designation, or neither should. If Community Hospital got reimbursed at the same rate for Medicare and Medicaid patients as St. Mary’s, it wouldn’t have financial problems, according to Thomas.

How can we help Community Hospital get reimbursed at the same rate as St. Mary’s and help stop the merger?

The final decision on the merger is due February 10th, so it’s coming up FAST. If you want to express an opinion against the merger, do it soon! Address an email to Community Hospital’s entire board and send it to Community CEO Chris Thomas at CThomas@gjhospital.org. Chris will forward it to the board.

If you think the unfair Medicare and Medicaid reimbursement rates between the two hospitals should be fixed, send your opinion on this matter to your federal elected representatives, Senator Michael Bennet and House Representative Scott Tipton.