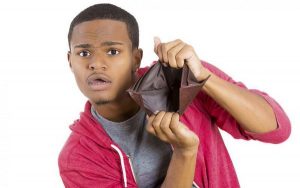 As a liberal progressive voter, I believe it is our patriotic duty to pay taxes for public amenities that make our quality of life great, like public safety.

This coming April, though, Grand Junction City Council will ask voters to increase the City’s combined sales tax rate from the current 8.02% to a whopping 9.16%, a rate even higher than the City of Boulder.

City Council has very good arguments for needing more money: we need more fire stations, emergency response times are too long, and we have roads and bridges in need maintenance and repair.

Of course City residents want the safety and security of these amenities, but the City hasn’t done anywhere near all it could to make the best use of revenues it already has, and to create new revenue streams to fund City necessities before it goes to City residents with a request that they pay such a big increase in city sales tax.

The City has been a poor steward of the money it already gets from taxpayers, spending irresponsibly and prolifically.

For example, Grand Junction has been handing CMU huge amounts of money for decades. No other municipality in the state funnels money to a pubic university the way Grand Junction does.

In 2008, the city started giving CMU $500,000 a year to buy the land and homes surrounding it so it could expand. The City has been paying CMU $500,000 every year for the last 20 years, and has even committed to pay this amount to CMU annually through 2027. That’s tens of millions of dollars the City has been funneling to CMU when it could have using it to fund actual City needs all this time, like the new fire stations, emergency response infrastructure, road improvements and park development it now needs.

Most cities just partner with public universities in their midst to share public infrastructure, or split the costs of new amenities that city residents can also use. No cities shovel money to public universities the way Grand Junction does.  It needs to re-think this if the City has dire public safety needs, and those needs should be the first priority for taxpayer funds. 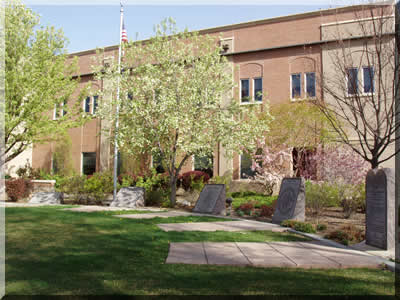 The $64,000 graveyard-style “plaza” in front of Grand Junction City Hall, installed to circumvent the U.S. Constitution and keep the religious Ten Commandments tablet on public land. The city could have moved the 10 Commandments tablet to a church across the street for free.

In 2001, the City also unnecessarily spent $64,000 on the “Cornerstones of Law and Liberty Plaza,” also known as “The Graveyard in Front of City Hall,” to get out from under a lawsuit the ACLU brought on behalf of local citizens who simply asked the City to move the Ten Commandments tablet off City property to comply with separation of church and state. The City could have solved the dilemma fast, and for free. A church a block away offered to help the City avoid the lawsuit by taking the tablet off the City’s hands and displaying it prominently on their property nearby, but the City of Grand Junction would have none of that. Instead, City Council dug in, voted to spend $64,000 taxpayer dollars to build the “Plaza,” so they could put the Ten Commandments tablet into a more “historical context,” get the City out from under the lawsuit and show those smart-alecky secular City residents that the City doesn’t HAVE to comply with the Constitution if it doesn’t WANT to.

It was a shameful part of Grand Junction history and left us with a constant reminder of this idiocy on display in front of City Hall. Even worse, the mayor who led the charge to build the “Plaza,” Reford Theobold, was arrested in 2015 for shoplifting Big Hunk candy bars from Cabela’s.

How stupid can a City be?

The City also spends $6,480 every year on a top-level membership in the Grand Junction Area Chamber of Commerce, even though the City isn’t a business and gets nothing of value for the money. The chamber also lobbies city council for policies that benefit big business, so the City is paying the Chamber to lobby itself. It’s nonsensical. What does the City get for its top-level membership every year? Its logo on the Chamber’s web page, a table at the Chamber’s annual banquet, sponsorship of a hole at the Chamber’s annual golf tournament and other meaningless perks that don’t have any benefit for City residents.

That money could be used to address City needs, and the the City and the Chamber should get less cozy and operate strictly at arm’s length from each other. 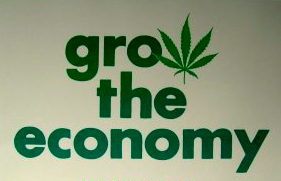 Colorado’s new marijuana economy is bringing big benefits to towns that embrace it.

The City has shown little will or creativity when it comes to creating other revenue streams to help fund City needs.

For example, City Council still refuses to allow the retail sale of marijuana within City limits. In so doing, it continues to deny citizens a huge, steady and legitimate new source of revenue. Towns and cities all around G.J. are benefitting from marijuana revenues swelling their coffers and helping them rebuild infrastructure like sidewalks, drainage and sewers. It’s allowing them to build new public amenities like basketball courts, boat ramps and camp grounds. The Town of Parachute doubled its sales tax revenues from pot taxes, taking in a whopping $1.6 million in 2016 alone. Marijuana taxes now make up half the revenue of the City of DeBeque. Marijuana is now a huge $1.5 billion market in Colorado, generating over $200 million in revenue for local jurisdictions state-wide, and we get zero, zip, while Grand Junction holds its hand out and begs citizens for more sales tax revenue.

And retail pot taxes aren’t the only money the City of Grand Junction is leaving on the table. They are forsaking revenue from elsewhere, too.

The City could also tax vape products and the nicotine fluids they use, but they aren’t.

The Municipal Code also exempts from sales tax a host of other products, like seeds and orchard trees, livestock feed, farm implements and electricity used in manufacturing. City Council could re-vamp the City’s Municipal Code to permit levying reasonable taxes on these items. There is also currently no city tax on gasoline, which for the first time in years just dipped to under $2.00/gallon.

The City could levy a small fee on single-use plastic bags and containers to reduce their use, cut the amount of plastic going into the landfill, clean up the environment and generate extra revenue.  It could also tax intangible products and services, like the sale of digital products and financial transactions.

Why isn’t the City even considering any of these things possibilities before it asks us for more money? 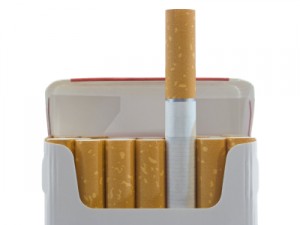 The City of Grand Junction could tax cigarettes to raise additional revenue. The City charter currently prohibits it, but Aspen charges a cigarette tax of $3.00/pack, and Basalt charges $2.00/pack

Boulder gets more amenities for its residents from sales taxes than we do.

The oft-reviled City of Boulder has a total combined City and County sales tax rate of 8.45%. It includes a tax on food.

What do those tax revenues pay for?

0.5% (5 cents on a $10 purchase) is a “Worthy Cause” sales tax, a 15 year initiative that goes to nonprofit human services agencies to build housing, provide health services, fund Meals on Wheels, homeless shelters and mental health. 0.1% of it is an open space tax that’s been in place since the 1960s, that pays for the purchase and maintenance of open space parks and trails. 0.5% of Boulder’s total City and County sales tax is a perpetual public safety sales tax that funds their local jail and its expansion, a detox/addiction recovery center, programs to reduce jail crowding, reduce recidivism and diversion for mentally ill offenders. 0.1% (one cent on a $10.00 purchase) goes towards roadway improvements, mobility programs, road safety projects, congestion reduction, cycling shoulders, repair of roads and bridges and other transportation needs.

That’s a lot of good stuff going back to the community.

What do we get for our sales taxes? Money going to CMU and the Chamber and dumb things like the Plaza that helped the City circumvent the Constitution.

Grand Junction can do better drumming up revenue and being more responsible with the money it already gets.

Grand Junction is a home rule city, so it can set its own sales and use taxes, but City leaders haven’t shown much will or creativity in finding ways to generate revenues from other sources, even ones right under their noses.  The city also needs to start saying “no” to influential local entities like CMU and the Chamber, that can access other sources of funding and that don’t return any tangible benefits for public safety or amenities for residents.

Taxpayer money should be spent first and foremost on City necessities and enhancing the lives, health and safety of citizens. Fire, police, emergency responders and public safety needs are high on that list.

Before the City asks its residents to pay more sales tax, it needs to demonstrate that it is being more responsible with the money it has, and open itself to taking advantage of obvious sources of money sitting at its feet that is has been ignoring.

11 comments for “Grand Junction wants to increase its sales tax, but it should stop wasting existing funds and tap obvious sources of new revenue first”