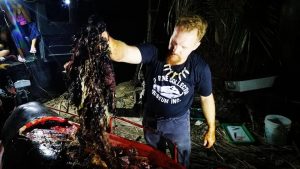 Darrell Blatchley of the museum shows the plastic found in the young whale that beached itself near Davao, Philippines, last Friday

A necropsy done on a beached juvenile whale last Friday in the Philippines revealed it had nothing but 88 pounds of plastic in its digestive tract and likely suffered for up to a year with pain from bowel obstruction before dying. D’Bone Collector Museum, whose mission is retrieving dead animals rarely seen by the public and preserving them, collected the whale off the beach and performed the necropsy. They said it was the most plastic they had ever seen in a whale.

National Geographic reports that nearly every seabird on Earth now has plastic in its system. A 2016 study by the Proceeding of the National Academy of Sciences of the U.S. on the effect of plastics in the environment concluded that threat is “geographically widespread, pervasive, and rapidly increasing.”

Americans use about 100 billion single-use plastic grocery bags every year, which requires 12 million barrels of oil to manufacture. Every plastic bag is used for an average of 12 minutes, and can take up to 500 years to degrade in the environment.

All this has some big implications for Grand Junction and Mesa County residents.

The Mesa County Landfill is filling up fast. We need an answer.

The Mesa County Landfill is filling up fast. Our and our local elected officials are looking for answers to reduce the amount of waste residents are putting into the landfill. G.J. City Council and the Mesa County Commissioners don’t know what they will do when it reaches capacity, and the cost to solve the problem will be huge. The cost to purchase land for a new landfill will be very high, and the existing landfill will have to be monitored for 30 years after it closes.

With these costly problems looming in the future, you’d think our local leaders would be looking for effective ways to extend the life of the current landfill, raise revenue to buy more landfill space and delay having to deal with the whole problem as long as possible.

But they don’t seem to be doing anything about the problem.

There are very effective answers if our local elected officials can overcome their fears. 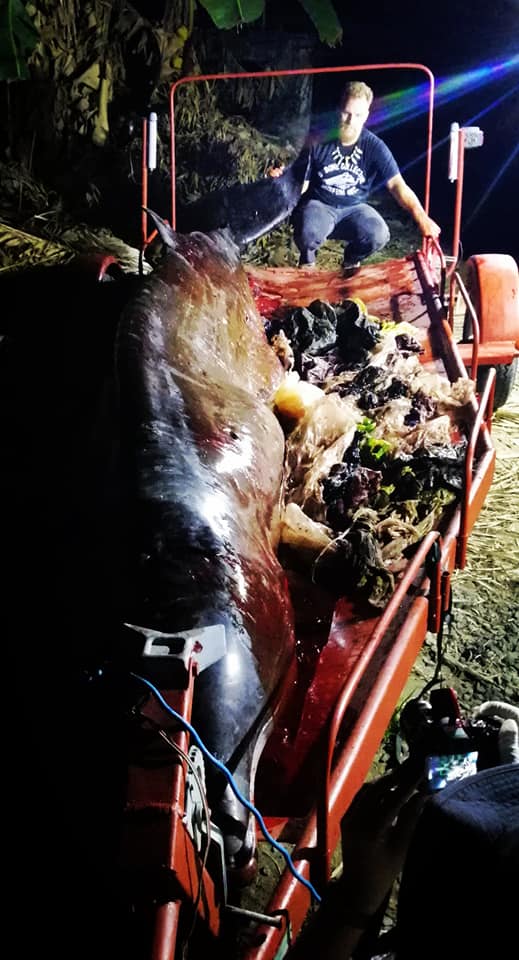 Photo of the plastic found in the whale

Charging a fee for single-use shopping bags dramatically reduces their use, reduces the amount of waste going into the landfill and preserves landfill space. It can also generate revenue that can be put towards dealing with the problem when the landfill is full in a few years.

Ireland led the war on plastic bags in 2002 by introducing a 15 Euro cent fee (raised to 22 Euro cents — about 33 U.S. cents — in 2007) on every plastic bag used. Immediately, the country saw a 94 percent drop in the use of plastic bags. As a result of the fee, annual per capita usage of plastic bags in Ireland dropped from 350 per person to 14 per person by 2012. Dubbed the “PlasTax,” all money from Ireland’s plastic bag fee goes to their environment ministry for law enforcement and clean-up projects.

New York, Los Angeles, Boston, Boulder, Colorado, Seattle, San Francisco, Washington, D.C. and Portland, Maine are just some of the U.S. cities that already have placed bans and fees on single use plastic grocery bags. This is a workable policy that confers extremely productive results.

In Colorado, Aspen, Avon, Breckenridge, Durango, Telluride, Basalt, Vail, and the Roaring Fork Valley are a few of the communities that have already institute fees on plastic bags, from 10-20 cents each. Why isn’t Grand Junction in that league?

A fee on single-use plastic grocery bags in Grand Junction and Mesa County could accomplish several things at once: It could dramatically reduce the amount of non-compostable trash going into the Mesa County Landfill, extend the life of the current landfill and increase the amount of money going into City and County coffers to ameliorate the landfill problem in the future.

The problem can be solved if City and County elected officials can lose their backward-looking attitudes and screw up the courage to enact new-age solutions to solve problems caused by last-century thinking.

Plastic in a dead seabird

5 comments for “Come on, G.J.: It’s time to charge a fee on single-use plastic grocery bags”