The bill would appropriate least $1 million annually for a grant program to carry out the new law, and it would give highest priority for the grant funds to rural public schools.

Why is this bill needed? Because of the Delta County School District.

In 2016, it was revealed that Delta County School District 50J was intentionally preventing students from getting medically-accurate sex education instruction by accepting a $2,000 grant from the Delta Pregnancy Resource center, a Christian missionary organization, to bring in Shelly Donahue, a self-styled preacher and evangelistic Christian abstinence-only speaker, to teach “sex ed” to Delta County students. Students said Donahue’s one-assembly program was the only sexual education they got in the Delta County public school system. 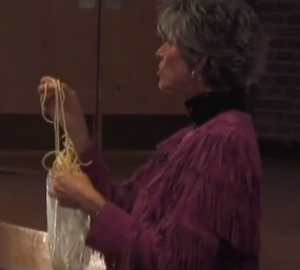 Delta County “sex ed” instructor Shelly Donahue with her bag of spaghetti, which she uses to illustrate what girls’ brains are like

Donahue was known for claiming that divine intervention healed her brain tumors, and for antics like holding up a plastic bag full of spaghetti to illustrate how “girls brains are like spaghetti” and by holding up toaster waffles to illustrate how boys’ brains are “compartmentalized.” Donahue tells kids that intercourse is unnecessary for a girl to get pregnant because if a guy gets sperm anywhere near a girls’ vagina, her vagina will turn into a “little Hoover vacuum cleaner,” suck it up and get the girl pregnant. In her talks to students, Donahue likens women who have sex before marriage to a piece of used packing tape, saying premarital sexual relations ruin women’s ability to bond to a mate. In another bit she likens girls who have had premarital sex to dirty diapers.

Donahue never mentions any of the topics state law mandates must be included in any comprehensive sex ed curriculum, like sexually-transmitted diseases, types and use of contraceptives and information about HIV/AIDS.

A student who questioned Delta High School having a faith-based instructor give what was supposed to be “sex education” at a mandatory school assembly, revealed that the school district retaliated against her by lowering her grades, telling her to “shut up” if she wanted them to come back up, and blocking her from getting grants and scholarships for college. The student sued and Delta County School District settled the case last year.