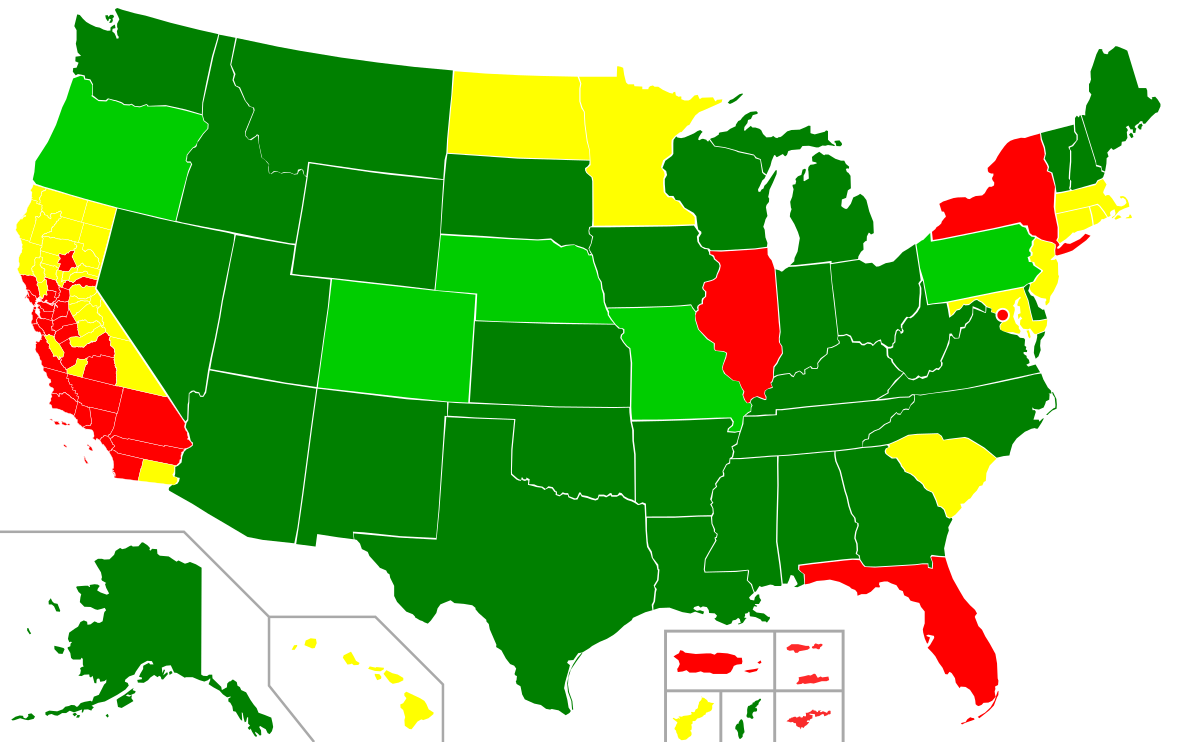 Americans young and old are getting slaughtered every day just going about their daily lives shopping in supermarkets, attending concerts and movies, going to services at churches, mosques and synagogues, going to school, going to work…

How did America get here?

Decades of Republican-backed liberal firearm policies have gotten us here. Republicans say they value freedom, but the people of this country no longer feel free. We live in fear of getting gunned down just living our lives every day because of the cumulative effects of liberal Republican gun policies.

Republicans believe gun ownership is necessary for people to protect themselves, so they’ve long backed policies that take away roadblocks to gun ownership and make it easier for everyone in the country to own a gun. And own them they do. Permissive Republican gun policies, like limiting background checks to only guns sold at licensed retailers and laws permitting concealed and open carry of guns by individuals now dominate the country. These laws — and the lack of restrictions that came with them — have contributed to the ubiquity of gun ownership in America and tremendous growth in the firearms industry over the last 50 years. In just 2016, the firearms and ammunition industry generated about $51.3 billion in total economic activity (pdf) nationwide, making them one of the most powerful lobbying forces in the country. And the gun industry has their own bottom line as their priority, not the safety of Americans in this country every day.

Republicans have fought effective gun legislation at every turn 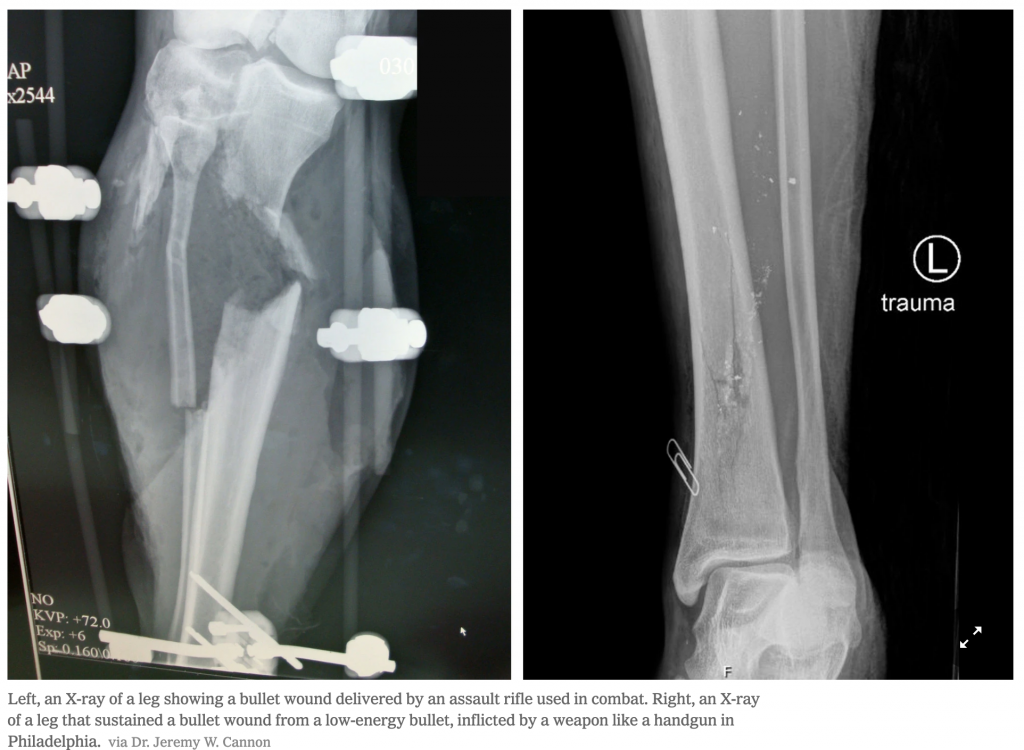 Republicans have been extremely effective over the past three decades at blocking meaningful firearm regulation in the U.S. Very few federal laws exist regulating use and possession of firearms, and most of those laws are remarkably weak and do little to  protect people, like the “Gun-Free School Zones Act of 1990.” There were a few laws that had more teeth but they were short-lived because Republicans wanted them to have mandatory expiration dates, like the Federal Assault Weapons Ban of 1994 that was in effect for ten years and expired in 2004. Now people throughout the country can freely buy, own and deploy combat-style assault weapons, like the one that caused the wound pictured in the photo at right.  (The photo contrasts a wound caused by an assault weapon with one caused by a lower-energy handgun.)

Republicans have promoted and passed other gun laws that don’t protect people from the gun industry, but rather the opposite — protect the gun industry from people, like the “Protection of Lawful Commerce in Arms Act,” that prevents firearms manufacturers and licensed dealers from being charged with negligence when crimes are committed with their deadly products. Republicans in Congress even enacted laws that block the government from gathering any information at all that might assist members of Congress in enacting any meaningful gun legislation. In 1996 Republicans enacted a budget restriction called the Dickey Amendment that greatly reduced the ability of the Centers for Disease Control and Prevention (CDC) to research the effects of firearms in the U.S. The Dickey Amendment effectively snatched away $2.6 million in funds the CDC had previously used for firearms research. In December 2011, exactly one year before the Sandy Hook Elementary School gun massacre, Congress moved to extend the Dickey Amendment’s funding prohibitions to the National Institutes of Health (NIH), too. These Republican efforts to eliminate federal research on gun violence and firearm injuries effectively tied the hands of public health agencies and have had a pronounced chilling effect on federal efforts to research guns and gun violence in the U.S..They’ve also intentionally deprived legislators of the very data necessary to write effective gun control laws.

Liberal Republican firearm policies have also led to the U.S. having the highest rate of gun ownership of any country on Earth: There are now 120.5 firearms in the United States for every 100 citizens — by far the highest gun ownership rate of any country in the world. The next highest rate is in the Falkland Islands, which has 62 guns for every 100 citizens — nowhere close to the U.S. Texas, home of the recent El Paso Wal Mart gun massacre, has some of the most permissive gun laws in the country, and those laws did not prevent the mass murder of people there. An armed school resource officer was present at Marjory Stoneman Douglas High School in Parkland, Florida, on February 14, 2018 when an armed gunman killed 17 students and wounded 17 others, and his presence did nothing to stop the massacre.

No wonder we’re getting slaughtered

Republicans like Colorado’s own Senator Cory Gardner are even continuing to openly support the re-election of President Donald Trump, who stokes racial resentments at rallies and on Twitter and uses inflammatory language that incites hatred and encourages gun violence against minorities.

The easy availability of guns in the U.S. to anyone with a gripe — egged on by the President’s words and attitudes and the absence of any potent Republican efforts to counter them  — has led to Armageddon in this country for average citizens. People are living in fear, buying their kids bulletproof school gear, avoiding concerts, theaters, and shopping malls. Republicans and the President point to mental illness as the main problem, not guns, but that’s a specious argument. Mental illness has been a part of humanity since the beginning of time, and we’ve never had slaughters like this from coast to coast before the mass proliferation of guns dominated America. Other countries have mental illness in their populations as well, but not the high rate of gun ownership and gun deaths America has. The fact is that most people with mental health problems are not violent, and they are actually are more likely to become victims of violence instead of perpetrators.

Republicans are looking around for something and someone else to blame, but the problem of mass gun violence in this country lies squarely at their feet. of Republicans have stonewalled and refused to do anything about the proliferation of guns in this country for decades. This tell us that no matter what they say, Republicans aren’t patriots. They’re the farthest thing from patriots if they continue oppose effective, comprehensive legislation aimed at stopping the mass slaughter of Americans by gunfire while going about their everyday lives.