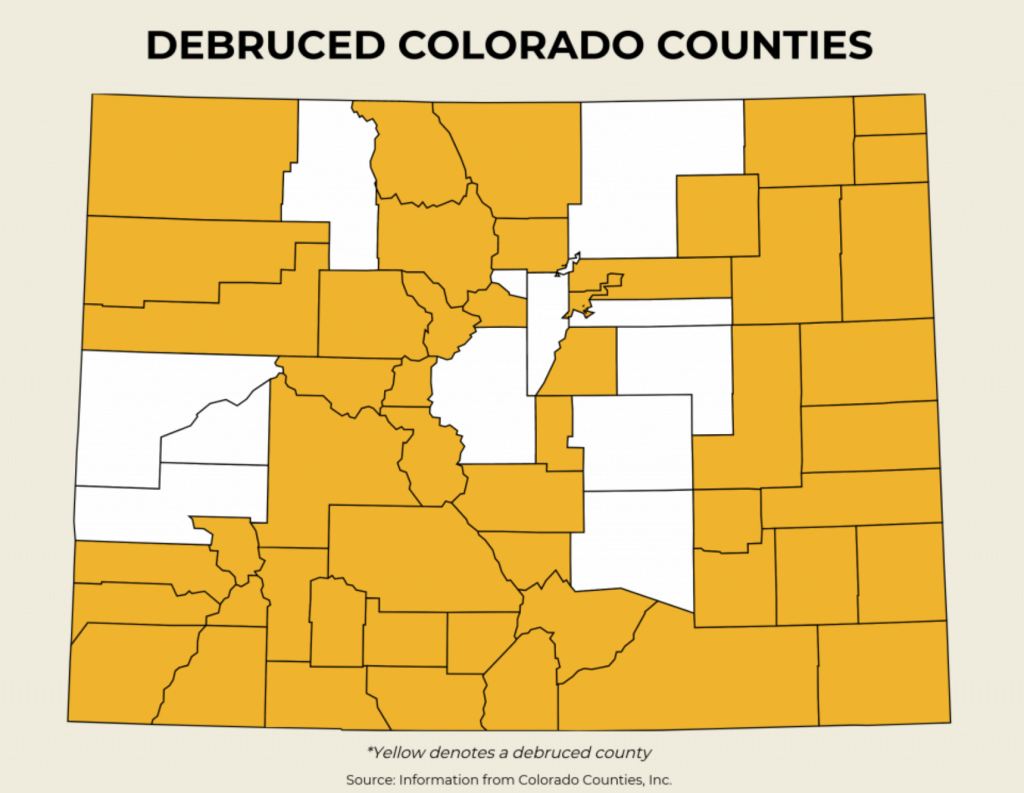 Gold colored counties are all the counties in Colorado that have de-Bruced.

Proposition CC on the November 5 ballot, if enacted, will let state and local governments keep all the revenue they generate through taxes and invest it to improve communities. It would effectively “de-Bruce” the whole state and end what amounts to a failed conservative social experiment.

De-Brucing means ending the effects of the TABOR Amendment, a 1992 amendment to the state constitution that effectively created a permanent revenue shortage for the state. TABOR was essentially an experiment in tax limitation that took taxing power away from the legislature and put it exclusively in the hands of voters. Over the decades, it has damaged the state in many ways.

The “Taxpayer Bill of Rights,” or TABOR, was written by anti-tax advocate and convicted felon Douglas Bruce. In December of 2011, Bruce, a Republican, was convicted of Class 5 felonies for tax evasion, failing to file a tax return, filing a false tax return, and attempting to influence a public official. After being found guilty, Bruce was sentenced to 180 days in jail, six years of probation and ordered to pay $49,000 in fines.

But Colorado was left with his law, the TABOR Amendment, which was aimed at drastically reducing government spending.

TABOR has contributed to the decline of the state

The TABOR Amendment effectively capped the amount of revenue state and local government could collect and required governments to refund any taxes collected in excess of the cap. The amount of the cap was determined by a calculation based on inflation and population growth. But the formula was flawed and the law created significant problems.

Over the years, TABOR has contributed to significant decline in the state’s public services. It has had a pronounced negative effect on government’s ability to keep up with the increasing costs of education, health care, road maintenance, and other costs that don’t increase in lockstep with the rate of inflation or population growth. TABOR’s revenue cap also “ratcheted” down spending in years of low tax revenue and kept the state from being able to catch up by increasing spending in years when revenue is higher.  TABOR’s effects proved so problematic, in fact, that since it was enacted, 51 out of Colorado’s 64 counties have “de-Bruced,” or suspended the law. So have 174 Colorado school districts. Our local school district, District 51, has historically been one of the lowest funded of the 178 school districts in Colorado (pdf), and TABOR has made the situation far worse.

Proposition CC won’t fix all the state’s problems, but it’s a start and will go a long way towards helping Colorado catch up.