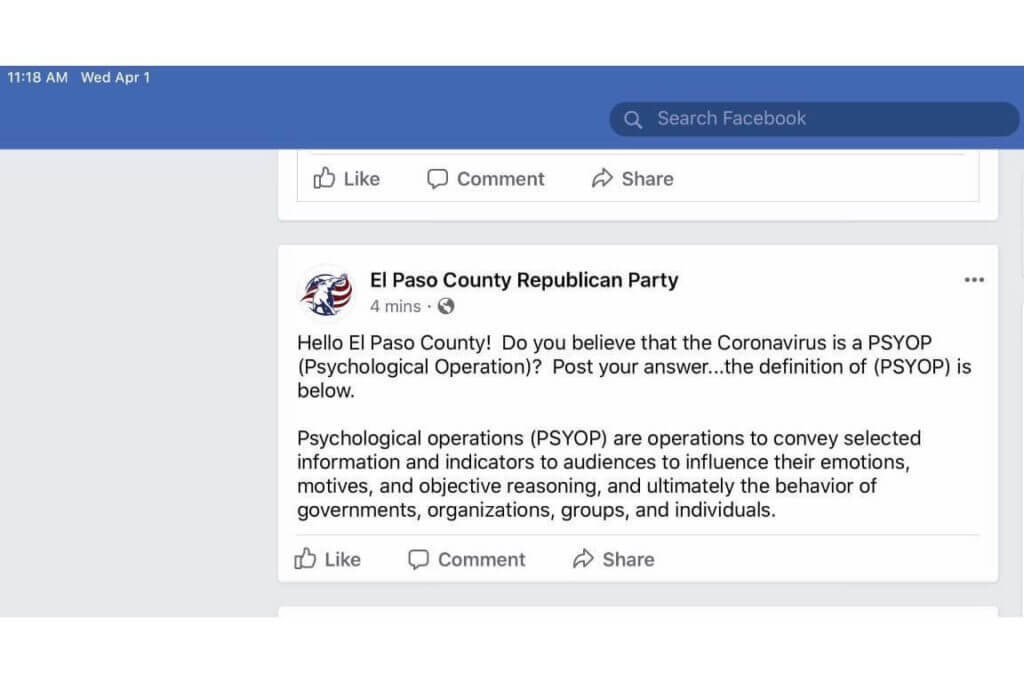 There may be hope for Colorado’s Republican Party, at least in El Paso County.

El Paso County elected Republicans took immediate steps to remove their party’s chairwoman after she published an insensitive Facebook post that suggested the Coronavirus pandemic is a hoax.

Seventeen elected Republicans in El Paso County, including the county commissioners, assessor, treasurer, coroner and clerk, all immediately jumped on Tonkins and wrote her a letter insisting that she step down.

“To suggest the entire world has somehow been deceived and ‘that the Coronavirus is a PSYOP (Psychological Operation)’ when citizens in high risk categories are dying, and indeed, a young, healthy law enforcement officer has just died in our community, is reprehensible…”

The letter was referring to 41 year old El Paso County Sheriff Deputy Jeff Hopkins, who died on April 1, one day after being diagnosed with COVID-19. He was Colorado’s youngest Coronavirus casualty at the time.

Joe Webb, the former chair of the El Paso County GOP wrote in a Facebook post shortly after:

To elicit opinions like [Tonkins did] was insensitive, callous and could help to add to the ongoing public emergency. It is insensitive because there are a number of Coloradoans that are or have suffered from the corona virus. They know of its reality and some have had family members die. This will unfortunately grow with time. It is callous because there are a number of medical professionals who are working (double shifts at least) to fight this virus. They are risking exposure to it themselves and in some cases coming down with it-even dying. Yet you speculate whether this is a ‘psych-op.'”

It’s good to see hoaxers and conspiracy-theorists finally getting the boot from the Republican Party.

It’s not often any more that you want to cheer something Republicans have done, but this might be one of those times.