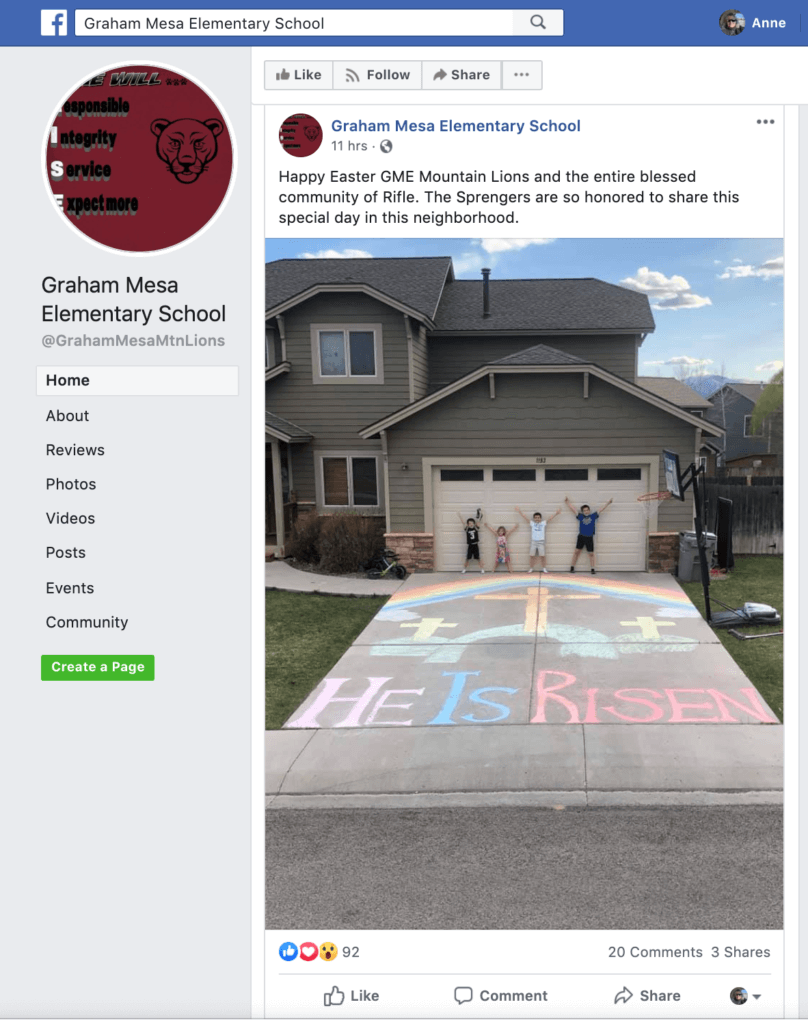 The principal of a public western slope elementary school posted a message on the school’s Facebook page April 11 that overtly endorsed Christianity in violation of the separation of church and state.

Brian Sprenger, the Principle of Graham Mesa Elementary School in Rifle, posted an Easter greeting on the school’s Facebook page yesterday evening with a photo of four children posing jubilantly in the driveway of a home with huge, chalk images of multiple large Christian crosses and the equally huge message “He is Risen.”

Message taken down after school notified

Several people who commented below the post pointed out how it violated separation of church and state. One person wrote, “Probably not a good idea to post personal beliefs on a public school page… seems like your [sic] speaking for the school as a whole…” Another person wrote, “I agree with you completely … This is something that should be posted on a personal page with personal beliefs.”

A secular reader contacted Western Colorado Atheists and Freethinkers (WCAF) about the post just before 8:00 a.m. on Easter morning to alert the group to the post. WCAF is a nonprofit organization that advocates separation of church and state and encourages people to report violations.

WCAF immediately contacted school officials and the message was removed about 15 hours after it was posted. The principal explained that he had asked students to share what they had been doing during the Coronavirus shutdown, and students sent him the photo as a result.

The law says public schools can celebrate secular aspects of such holidays and teach students about the belief systems that underpin religious holidays, but they are strictly prohibited from endorsing religion or engaging in religious observance of such holidays.