Page 22 of the “Determination of Voter Intent” manual for Colorado Elections (pdf) published by the Colorado Secretary of State — the official legal guidance from the state about what counts as a valid vote — says in regard to write-in candidates:

“The last name of the candidate must be provided. The voter may also provide the candidate’s nickname or initial of the first name, and as long as the voter provides a reasonably correct spelling of at least the last name of a qualified write-in candidate, the vote will be counted.” (Section 1-7-114, C.R.S.). [Underlining emphasis added.]

This means that if a voter writes in “Robert Prescott,” “B. Prescott,” “Bobby Prescott,” “R. Prescott,” or just “Prescott,” or if the voter even misspells his name as “Prescot” on the ballot, the vote must be counted for Bob Prescott, as long as he is a certified write-in candidate. To get certified, Mr. Prescott had to file affidavit with the county saying he intends to run for the office, and prove he has lived in his district for at least one year. Bob Prescott has already done both of those things.

One week later, on July 20, Mr. Prescott returned to the Mesa County Clerk’s office for more clarification. He asked what happens if a voter fails to fill in the oval next to “Write in” on the ballot, but still writes in some version of his name.

The elections department employee tells him that the oval next to his name (called the “target area”), MUST be filled in in order for the vote to count, otherwise the write-in vote will not count.

That information was incorrect as well.

…and on Page 20, under the section titled “Determination of Voter Intent,” the manual states:

It’s clear, then, that under Colorado law, the oval target area does NOT have to be filled in for the vote to count.

The official guidance from the state must be applied on every ballot, whenever it is counted.

The ballot-counting machine kicks out every ballot that has a write-in candidate’s name on it for “adjudication,” meaning the machine diverts any ballot with handwriting on it to a pile of ballots that must be read by a team of bipartisan election judges who are charged with determining the voters’ intent. So every ballot with a write-in candidate’s name on it must be seen and interpreted by actual human eyeballs whenever it is counted.

The Colorado Secretary of State’s office has verified that the information Bob Prescott got on these two dates was in fact incorrect, and they intend to address it.

Another obstacle: conflict of interest by the Clerk 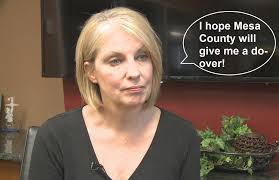 Tina Peters’ friend Janet Rowland has already been a two-term county commissioner, but Janet doesn’t want to give someone new a chance to hold the office. And Tina Peters will probably help keep that from happening, too.

Write-in candidates for county offices face even more hurdles, too, including some that are particular to Mesa County at this time.

Colorado law says a County Clerk “may post the list of eligible write-in candidates” on the the Clerk’s official election website. The word “may,” though, also means the Clerk can legally not post the list. Posting a list of certified write-in candidates would better inform voters about all the candidates who are running for the office, but there is no doubt that doing so would harm Janet Rowland’s chances of winning the seat by making it easier for people to vote for her opponent(s).

Mesa County Clerk Tina Peters has an inherent conflict of interest that will prevent her from posting a list of eligible write-in candidates on the County’s website: Janet Rowland are Tina Peters are personal friends. Rowland was also campaign manager for Peters’ successful 2018 run for County Clerk, so it’s likely Peters feels she owes Rowland a debt of gratitude and that she should do as much as she legally can to assure Rowland wins the commissioner seat. One big way Peters can help Rowland legally is by NOT posting the names of certified write-in candidates on the County’s official elections website.

And one more obstacle:

The county clerk must by law create a list of eligible write-in candidates and provide the list to election judges at all polling places. But according to the State, election judges can not give a copy of the list to voters. They can only show it if a voter asks to see it. And the judges have to keep the list face down on the table, and voters have no way to know a list even exists.

So the odds in Colorado county races are heavily weighted against write-in candidates, and particularly so here in Mesa County, where bias on behalf of the County Clerk is potentially a big factor, and where the Old Guard Republican Establishment (OGRE) likes to keep new people from getting any chance to hold elected office.