Pugliese: Global warming is just a “personal opinion” that shouldn’t be taught in D-51 schools

In 2010, Pugliese represented a group called “Balanced Education for Everyone” (BEE), that proclaimed global warming was “junk science.” BEE promoted the view that teaching about global warming in schools frightened children unnecessarily. Pugliese presented District 51 School Board with a petition that she wrote herself, containing over 700 signatures, that demanded D-51 make its science teachers stop teaching global warming to students. Pugliese, who is not a scientist, told the School Board that climate change was “not a proven scientific theory” and that “there is no evidence to support it.” She said climate change was just a “personal view.”

The D-51 Board politely accepted Pugliese’s petition, but did not act on her advice.

A beautiful, peaceful area of the Audubon Section of the Riverfront Trails Project that Mesa County Commissioner Rose Pugliese worked to destroy.

As County Commissioner in 2013, Pugliese worked to gut all County funding for the Colorado Riverfront Project that now consists of long, beautiful, much-loved walking and biking paths along the riverfront.

In November, 2013, Pugliese sent an email to her supporters asking for help to kill the Riverfront Project, saying it was a waste of “hard-earned taxpayer money.” The email said, in part:

We need your help!

I am sure many of our constituents would love to make $34,000
working part-time!

When I asked what this person’s job is, no one really seemed
to know. Then, I was told that this position was used to
coordinate volunteers and plan the riverfront concert series.

The Riverfront Project survived Pugliese’s efforts to kill it.

In 2015, Pugliese was slapped with two civil malpractice lawsuits by former law clients alleging she had given them false legal advice that had cost them financially. Mesa County District Judge David Bottger ruled that Pugliese did, in fact, give the clients incorrect legal advice and he invalidated a settlement agreement between the two clients that Pugliese had written based on her incorrect advice.

In 2017, Pugliese voted with Commissioners John Justman and Scott McInnis to enter into a contract (pdf) to pay $57,360 in taxpayer funds to Project 1.27, a Christian ministry that works through churches to recruit Christian foster and adoptive families, to assure children are “cared for within Christian communities.”

Coincidentally at the time Pugliese’s friend Janet Rowland was employed as the national director of Project 1.27.

Project 1.27 engages in  “[foster] training with a solid Christian perspective,” and provides training to “Christian parents wishing to foster and adopt.” The group’s website makes no mention of recruiting families belonging to any other religion, or families of no religion.

The county’s contract required 20 hours per month be spent on “faith-based recruitment.”

This use of taxpayer money to effectively promote Christianity was a clear violation of the separation of church and state in the First Amendment to the Constitution.

As an attorney Pugliese should have known better and worked to protect the County against even the appearance that it was violating the law. Instead, she went along with it.

In April of 2020,  the Daily Sentinel outed Rose Pugliese for spreading false information on social media that was put out by Colorado Counties, Inc.

Pugliese claimed wrongly that Governor Jared Polis was intentionally withholding federal funds intended for local governments under the Coronavirus relief bill approved by Congress in March of 2020, and he was going to use those badly-needed funds to balance the state’s budget, forsaking people in rural Colorado who desperately needed the funds.

But Pugliese failed to read the bill.

The bill that Congress, including the Republican-led Senate, had approved designated relief funds only to state and local governments that served populations of over 500,000 people, so many small rural towns and counties did not qualify for the funds.

Under Pugliese, County Administrator Frank Whidden was a total disaster for the County 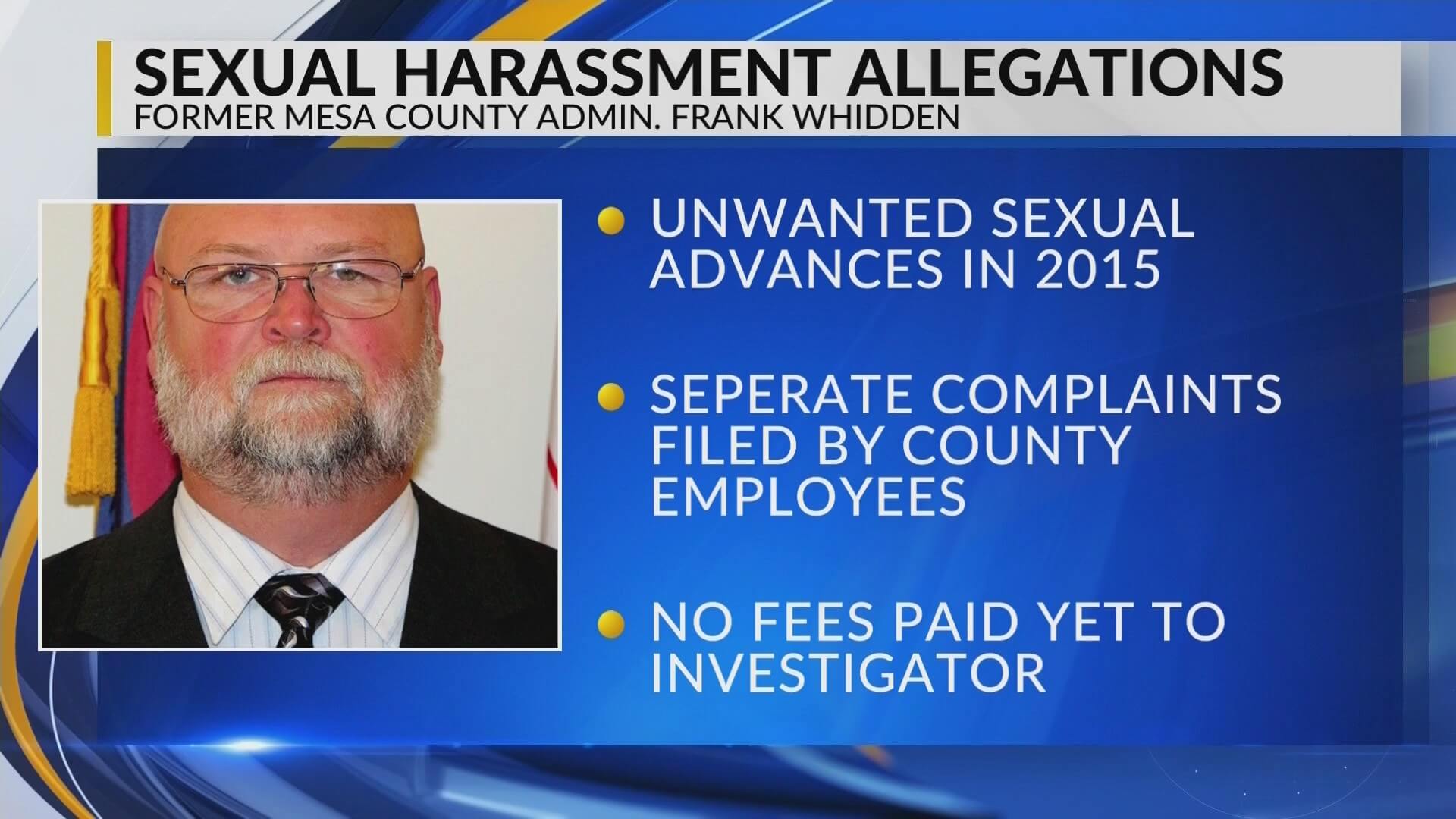 The Commissioners assigned Mesa County Administrator Frank Whidden to simultaneously to head the County’s IT and Human Resources Departments in order to save money. Whidden’s behavior brought a slew of lawsuits upon the County. Taxpayers also footed the bill for Whidden to get a degree in Family Therapy from an online school and then he started a private counseling business on the side while still employed at the County, without telling the commissioners, all while continuing to do all that other stuff for the County. (Photo: WesternSlopeNow.com)

Former County Administrator Frank Whidden, who served under Pugliese, proved to be an embarrassing and expensive disaster for the County.

Whidden started working for the County’s IT Department 2011, he was appointed County Administrator on December 8, 2014 and he resigned in August of 2019 amid great controversy and numerous lawsuits.

And complaints there were — about Frank Whidden.

Several female County employees charged Whidden with making improper sexual advances towards them. The County had to pay the cost of hiring an outside investigator to look into the sexual harassment complaints. During the investigation, the Commissioners put Whidden on paid administrative leave where he continued to earn his full pay of $180,000/year until he resigned two months later. One of the employees who complained about Whidden’s improper advances told the Daily Sentinel that “it was not uncommon for Whidden to make lewd comments at work, allegedly telling some female employees that he ‘didn’t need to take Viagra.’ She said that “if Whidden liked an employee, they would thrive, but if he didn’t, he would find ways to get rid of them.”

Under Pugliese, Whidden and the County were the subjects of several age discrimination lawsuits that were filed in federal court in Denver. The suits alleged that Whidden laid off six older workers in the county’s Information Technology Office while retaining younger workers. The county paid out financial settlements to two of the six workers to the tune of $62,500 each. The other lawsuits continued.

One of the lawsuits, brought by a female employee who had been with the County for 26 years and was laid off in 2016, revealed that while Whidden was laying off IT workers in an effort to cut the county’s budget, taxpayers were simultaneously reimbursing him for his costs of obtaining a master’s degree in marriage and family counseling. The County reimbursed Whidden over a period of several years for courses he took at an online school based in San Diego, California.

While employed by the County in all of these positions, and without telling the Commissioners, Whidden also opened his own private counseling business and was taking clients on the side. Whidden had told the commissioners he was taking classes in mental health and suicide prevention because suicide was such a big problem in the County, but did not tell them he was pursuing or opening a private counseling business.

In 2018, the Commissioners gave Whidden a 37% pay increase that they approved in secret.

Whidden finally resigned from the County in August of 2019 amid all this controversy, leaving the County to pick up the pieces — and expenses — he left behind.

No leadership during the pandemic 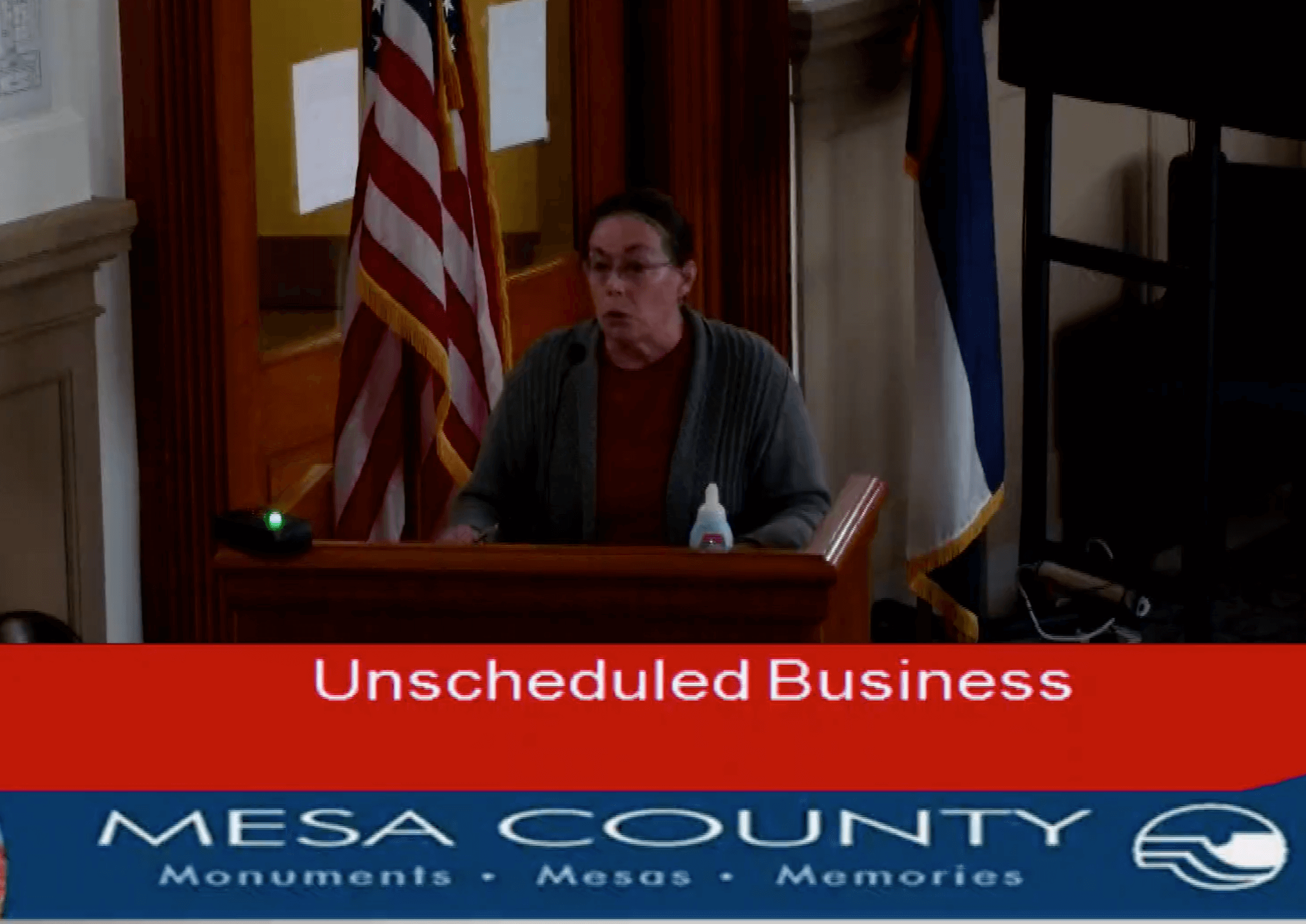 Benita Phillips, R.N., B.S.N. speaks to Mesa County Commissioners at their Nov. 9, 2020 meeting, and urges them to step up and start encouraging people to wear masks to help rein in the pandemic.

In 2020, during the worst of the Coronavirus pandemic, all of the Mesa County Commissioners including Rose Pugliese, were silent about the pandemic until an RN appeared at a county commissioner meeting and literally begged the Commissioners to urge all county residents to wear masks when out and about, and avoid gatherings to reduce the spread of the virus and help preserve our local economy.

We could go on, about other things, like the County’s long pay freeze and how poorly the County has treated its employees under Pugliese, about the disastrous County Clerk’s office that has remained without comment by the Commissioners under Pugliese, and more, but you get the idea.

Rose Pugliese’s dismal track record of incompetence would get any other employee in the United States fired. In Mesa County, that track record, along her friendship with Janet Rowland and Mesa County’s legendary GOP cronyism, are all she needs to get installed into one of the most highly-paid positions in the County.

It is a scary situation that should offend all County residents, and the fact that Pugliese is actually being considered a finalist for the County Attorney job certainly drags down any remaining confidence people might have had left in our County government.