A commenter to this blog wrote that we all should hear exactly what Tina Peters had to say at this event, apparently because the commenter felt it was extremely important for us to hear directly from Tina and not through the filters of the media. The commenter provided a link to a video of Tina’s talk at the My Pillow Guy seminar, so we could hear for ourselves what Tina had to say.
Below is an extensive verbatim excerpt of what Tina had to say in South Dakota, starting from the beginning of her talk, right after she was introduced as a hero. Buckle your seat belts.
The video is 54 minutes long in its entirety. It was published on August 11. All Mesa County voters should watch it. The video reveals how vapid and imprecise Tina Peters is, and how far out of her depth she is in the position to which she was elected.

Here’s exactly what Mesa County Clerk Tina Peters had to say, in her own words, transcribed from the first part of the video:

When I started having citizens come to me and tell me that something didn’t seem right, something didn’t seem right in our local city council elections, something didn’t seem right in our county from years ago to the 2020 election and they wanted answers, and I said “You know what? If there’s a there there, we’ll find it. And I’ve made that pledge to the citizens of Mesa County and all over Colorado, that the people elected me, not the Secretary of State. She has come into my office several times already in the last two years since I’ve been the elected official because I am a Republican, I’m a conservative, and she’s not. And she weaponizes her position to attack people that disagree with her. And so I’m not, I mean my son who was the Navy SEAL for 9 years, a lot of that blood runs through our veins, tragically I lost him four years ago and in a very tragic accident on duty, and but, you know what? When you’ve gone through, when you’re a cancer survivor and you’ve gone through losing a 27-year-old son, there’s not much people can do to you, right? 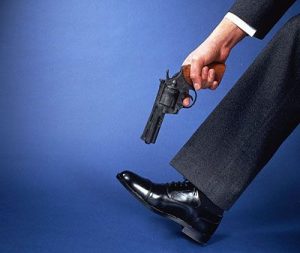 Is Tina Peters shooting herself in the foot? You be the judge.

So when the people came to me, and they said “Can you help us, can you help us find something?” And I said “If you bring the information to me I’ll look at it, and I think that’s what we all should do, right? Don’t just turn a blind eye and say “Well you know, I believe this or I believe that,” but really look at it, and because of that I’ve been persecuted. They’ve tried to take over my elections office because Mesa County elections … or Mesa County is on the western slope of Colorado, and we are the last bastion of freedom in Colorado. So, we would be a BIG jewel in our governor and our Secretary of State’s crown to take over my office and control the way you vote …How do you like that? So we have… we have listened, I’ve listened to people, they send me things all over and I’ve looked at it objectively and there’s some discrepancies there that I cannot deny, and I tell people, I say “I can’t unsee some of these things.” If I’m going to be honest with the people in Mesa County, and in Colorado, and with all of you, I cannot unsee some of these things, so I’m willing to put myself out there. I’ve been attacked, slandered, everything the the media can do to me. Just yesterday I got an order from the Secretary of State that she was going to invade my Elections Department today, and guess what? When I was on a plane to come see you kind folks and to talk to you out there, guess what they did? They provided a search warrant and raided my office. We don’t know what they were doing in there, because for several hours they wouldn’t even let my chief deputy clerk, who is the Acting Clerk for Mesa County when I’m absent, would not even let her observe what the Secretary of State and Dominion were doing in my office, allowing it for several hours, in the voting room alone … alone with no one that knew anything about elections, watching what they did. But they did do this: After several hours they let my chief deputy  come in, and they go “Oh look at this! I don’t know what they did. I don’t know what they did. But I can tell you that I don’t trust them, because I don’t trust them, we are we’re going to find out exactly what’s going on…

So I’ve been accused of passing down, or allowing someone to expose our passwords, in our elections office, and these just happened to be passwords that only the Secretary of State has. As a matter of fact, when they were in doing this ‘Trusted Build’ in my office, they told me that I’m not allowed to have those passwords but only they are, and so I question that because we have passwords to get in our system… Why do THEY have passwords I can’t have to get in the back door my system? Why is that? What do you think? I don’t know. That’s a question that we need answers to, and we’re going to find it.

Now you can decide for yourselves if any of this makes any sense.