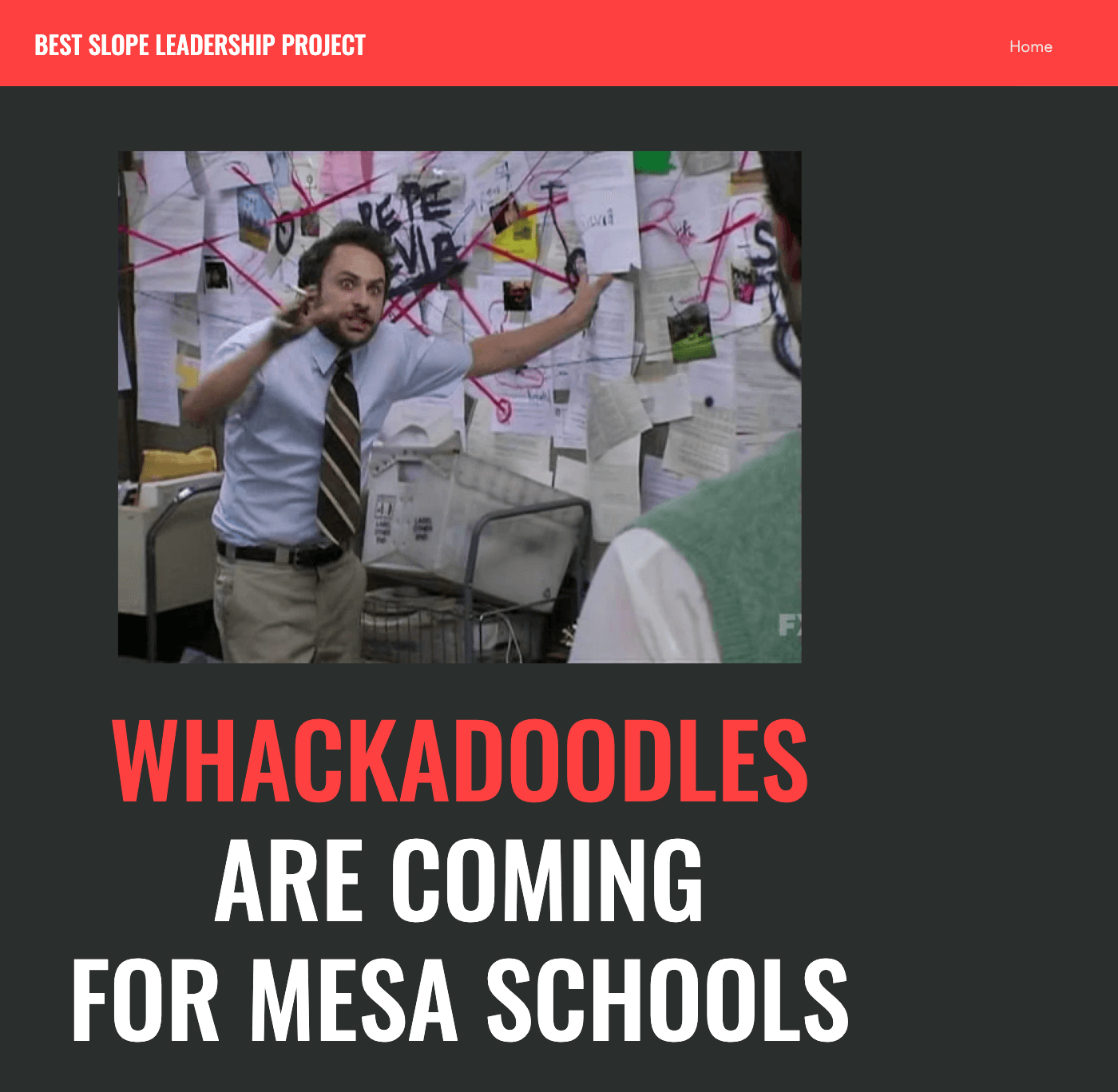 On its website, BestSlopeLeadership.org, the Project describes the local group “Stand for the Constitution,” which is backing a bloc of three candidates for school board. this way:

Part I:
Meet Stand for the Constitution

AKA I had nothing going for my life, I radicalized myself online, and now I have a group of other radicalized buddies and we want your school board.

Barely 30 years after its mass adoption, we’re all dealing with one of the biggest challenges of the internet:

​The ability of political predators to hack the brains of gullible and vulnerable people to transform them from nice family members, co-workers, colleagues, and friends into enraged, conspiratorial, gun-hoarding, merchandise-buying, fleeceable mobs for short-term political and financial gain.

​Here in Mesa County, these victims of radicalization have run amok for the last two years. And they’ve found each other.

​This victim-of-radicalization support network is called Stand for the Constitution.

​In two short years, they’ve made our formerly moderate, hardworking, grounded Mesa County into one of the nation’s leading epicenters of Y’al Qaeda political theatre. They’ve brought assault rifles to, and started fights at public meetings and terrorized local elected Republicans who wouldn’t follow them off the deep end – including some who initially flirted with them.

​Stand for the Constitution has hijacked County Commission, School Board, and City Council meetings. They’ve chased successful, high-functioning, problem solving moderates out of our county GOP and replaced them with radical weirdos with few life skills other than being professional radical weirdos.

They’ve also sent a loud message to investors, small business owners, and talented migrants in Colorado and beyond:

​Mesa County is not the special blessed place of the Bookcliffs, the Grand Mesa, the National Monument, the fields of Loma and Fruita or the orchards of Palisade, nor the confluence of the Colorado.

We’re not a community with a compass.

Mesa County wants to be an rage-filled backwater where the weirdos among us run the show and political grifters cash in on the game.

Stand for the Constitution ran four goofballs for Grand Junction City Council this spring, including a candidate with questionable ability to read and write, and they were soundly defeated by voters in favor of moderate, experienced candidates.

​They’re now running three candidates for your District 51 School Board this year.

All of have chances of winning if normal people sleep on this election.

The Best Slope Leadership Project registered as a nonprofit business with the Colorado Department of State on March 11, 2021. Its principal and registered agent is Pasquale Verrastro, who goes by the name “italian_cowboy” on Instagram. Verrastro is also a major contributor to the organization. Verrastro’s Facebook profile says he lives in Potenza, Italy, but the registered address of the business is a 784 sq. ft. residence on Meeker Street on Orchard Mesa. The business received a $2,000 donation from Verrastro on 3/16/21 and the organization had a total income in the first quarter of the year of $9,450.

To read more of this informative and entertaining voter guide, click here.

3 comments for “New voter guide from the Best Slope Leadership Project explains the issues and candidates in the Nov. 2, 2021 election”