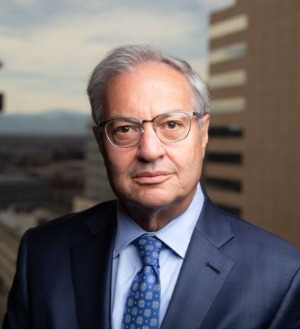 Tina Peters’ attorney, Harvey Steinberg, submitted a Motion-to-Quash her arrest warrant on 7/14 for her travel out of state to Las Vegas without court permission on 7/12, violating the terms of her bond. In the motion, Steinberg blames himself for Tina making the trip to Las Vegas, saying she emailed him her plans for the trip and relied on him to get permission from the Court before leaving the state, but he didn’t see the email that contained her plans. In the body of the motion, Steinberg writes that it was “part of an email thread that he didn’t notice.” But Steinberg did not include for the Court a print out of the entire email thread for the Court to see, for context, or to see what other talk surrounded it.

Plus, we have reason to doubt the veracity of what Steinberg has written in his motion.

After all, he has a lot less to lose than Tina in this matter. Tina is the Goose that Laid the Golden egg for attorneys. Based on what Mike Lindell alone says he donated to Tina’s legal defense fund, she likely has at least $1 million to spend on attorneys, making her an extremely attractive deep pocket. If Steinberg was found to be lying about overlooking this email, the worst punishment he would likely incur would be a slap on the wrist, maybe a letter of reprimand from the Colorado Commission on Judicial Discipline, but nothing that would seriously impact his career. And it could be well worth it to him, since an online review says Steinberg bills $500/hour.

Additional information Steinberg included in the motion for drama is incorrect as well:

Tina’s not a Gold Star Mother

For example, Steinberg’s first “statement of fact” in the motion is that Tina is a “Gold Star Mother.”

While her deceased son was a Navy Seal on active duty at the time he died performing at an air show in New Jersey in 2017, his name does not appear in the National Gold Star Family Registry. According to the Registry, the circumstances of his death did not fulfill the criteria to be included in the registry: 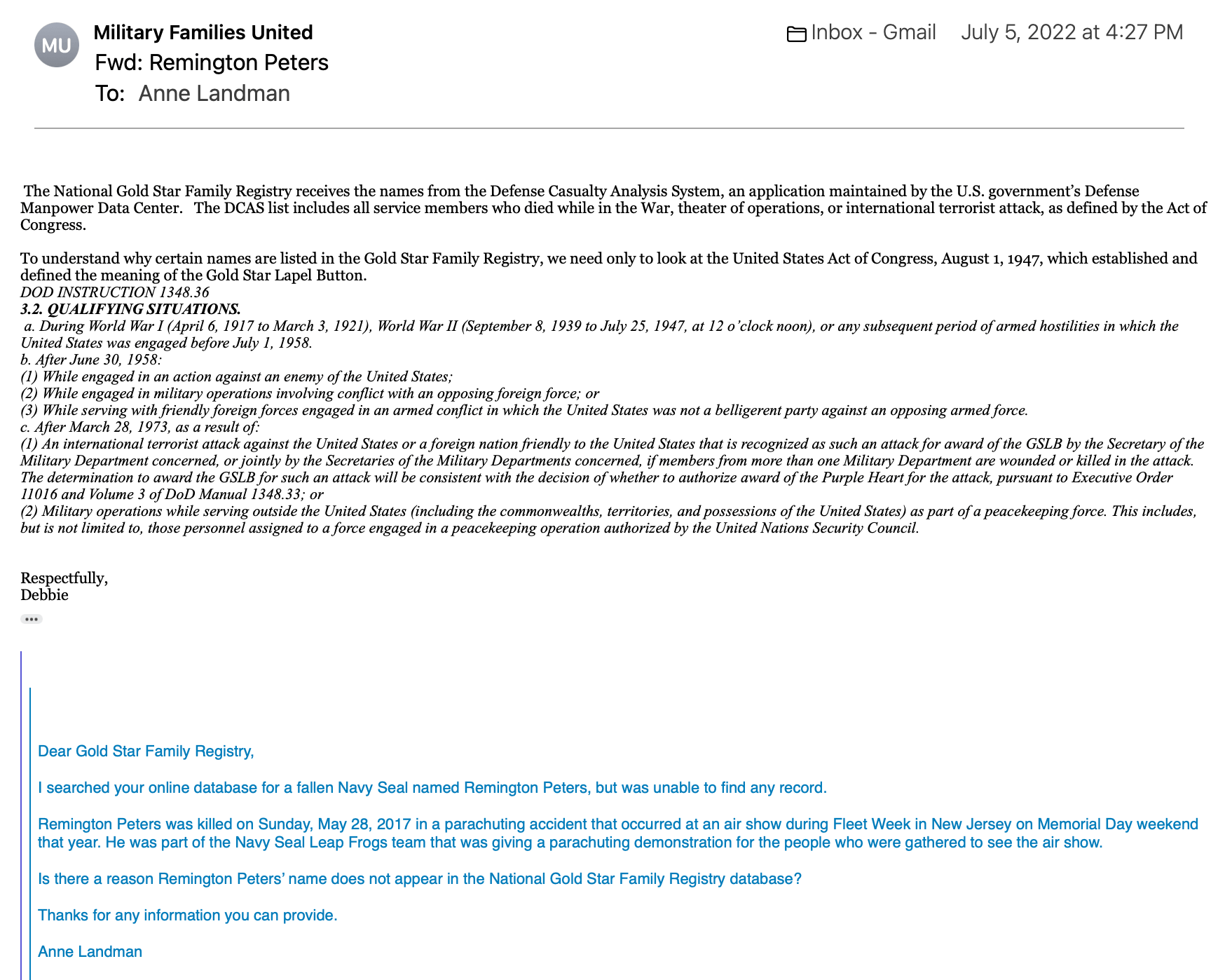 Tina is functionally no longer Clerk, and is no longer a candidate for office.

Steinberg also writes, “Ms. Peters is the elected Clerk and Recorder for Mesa County. She is also a candidate to become the Secretary of State for the State of Colorado…”

In reality, Peters is a Clerk in title only and is no longer functionally Mesa County Clerk. She has been barred by the Court from showing up at any of her offices or having contact with any of her employees. And Peters is no longer a candidate for any office, either. She was a candidate for Secretary of State — in the past tense. The primary election has come and gone. Tina came in second out of three Republican candidates, garnering only 28.8% of the vote. The winner, Pam Anderson, got 43.1% of the vote, a far bigger margin of votes than Tina. Even if the recount Tina is asking for turned up a handful of more votes, it wouldn’t make any difference, and even if it turned up a lot more votes, she still would still be a distant second place to Anderson. The claim that she’s still a candidate in any sense is utterly ridiculous.

No matter how many recounts Tina pays for, winning this election will remain an elusive fantasy for Tina.

Tina didn’t need, and still doesn’t need to travel out of state. 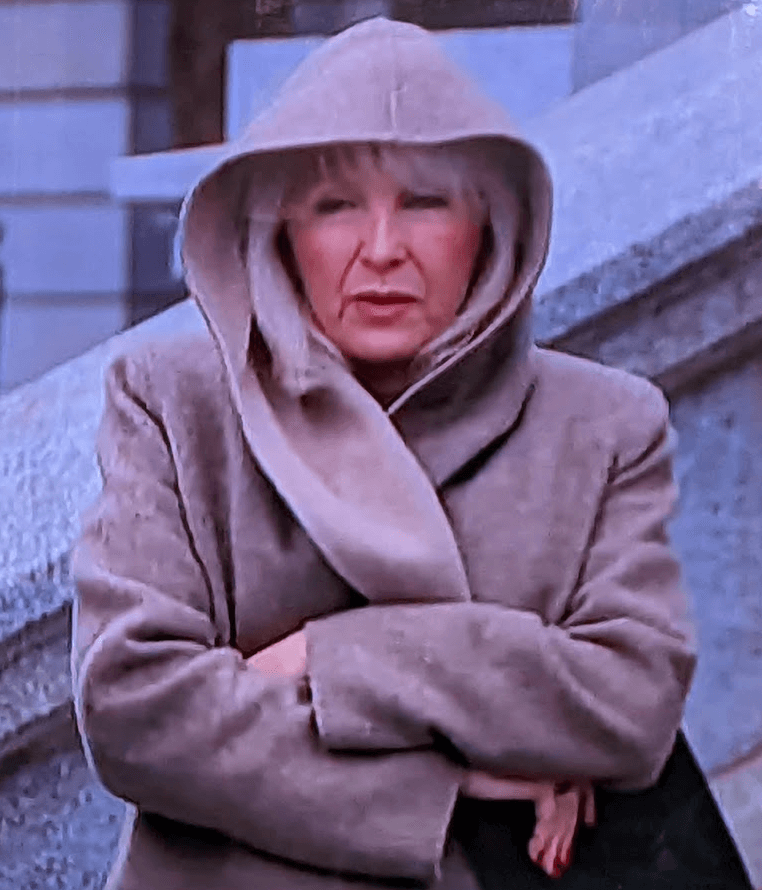 Steinberg says Tina “needed” to travel out of state for her Colorado Secretary of State campaign without explaining why. It was an in-state election, and her potential constituents, supporters and voters were all inside the state, thus any travel should have been within Colorado. It didn’t appear to the public that out-of-state travel was necessary for her campaign, and as it turned out, she only traveled out of state to promote Trump’s Big Lie of a stolen election — a completely absurd, proven-false claim that continues to threaten our democracy and degrade confidence in our elections. It’s also the same claim that has been the source of all her legal troubles already. Out of state travel was simply not a necessity.

Not violating terms of her bond is ultimately Tina’s responsibility, not her lawyer’s.

Steinberg argues that because of his inattention to his email, “Ms. Peters has not knowingly violated bond conditions, and the warrant should be quashed.”

It shouldn’t be quashed.

Tina knows very well that the terms of her bond required permission from the court to travel out of state during her campaign. She also knows very well that the campaign is over, even if her recount is not. And any prudent person in her position should know that she must have permission from the Court sewn up before she goes anywhere out of state for any reason. As a professional clerk, she would know that after the election was over, she needed to ask the Court whether travel outside the state was still permitted or not under any circumstances. Any prudent person, and especially a professional Clerk, would be aware of the rules and requirements like this, and the stakes for her were particularly high, including potentially being remanded to jail to wait for her trial, which could be months to even years from now, since she doesn’t even have a trial date yet. Beyond this, it’s also a well-established maxim that ignorance of the law, or rules, is no defense.

It’s time Tina is finally held responsible for her actions, including this infraction of her bond, which was ultimately her responsibility. The court needs to stop letting her off the hook for her behavior. The Court also should understand by now that Tina will push all the boundaries to see what she can get away with, and it’s time the Court start treating her like anyone else who would come before the Court under the same circumstances.