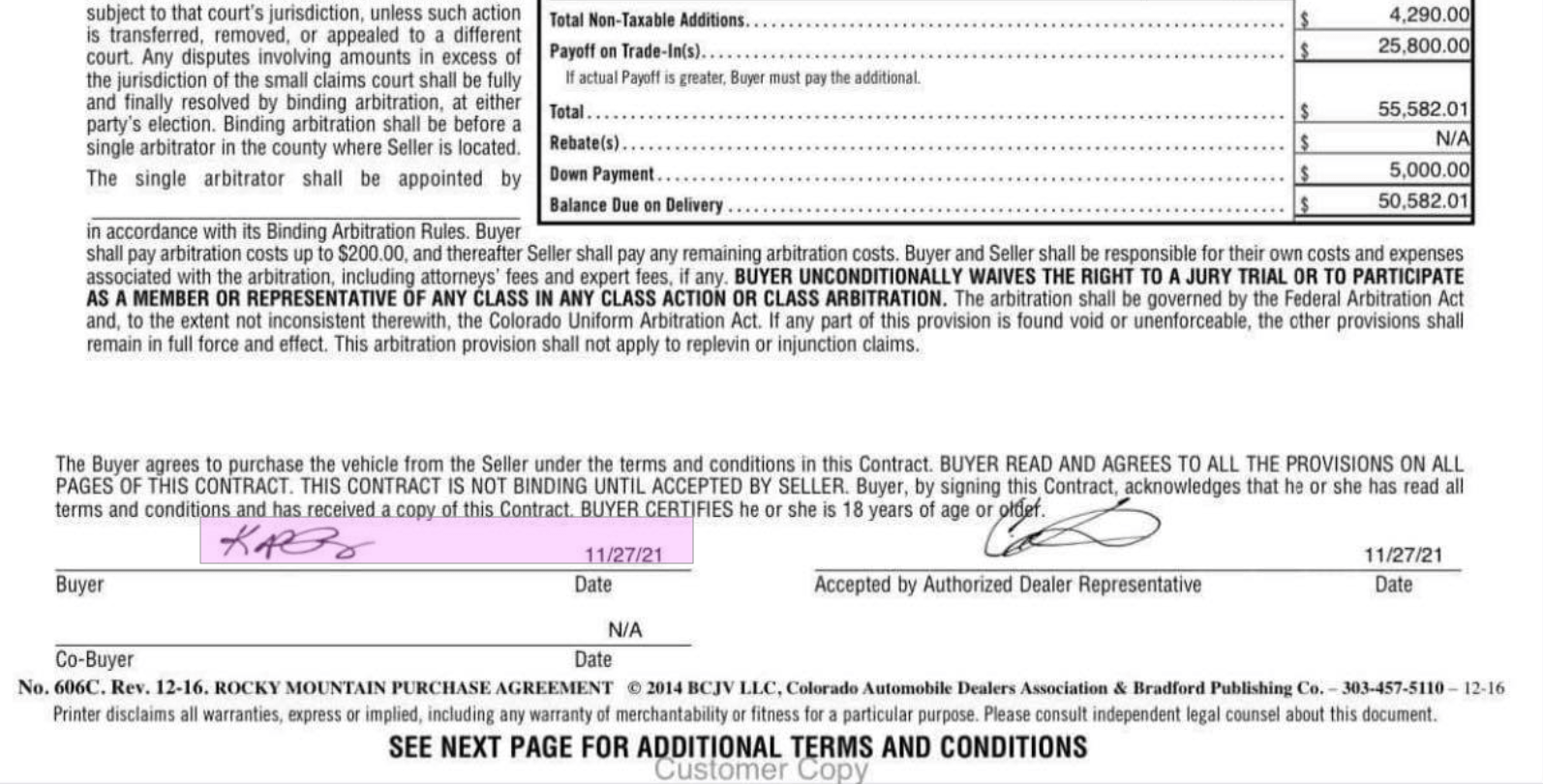 The signature that appears on all of Katelyn Slocum’s documents in her vehicle deal except one. Katelyn says this is not her signature.

Katelyn Slocum is a Certified Nursing Assistant with two small kids who works as an in-home hospice care provider for HopeWest. She uses her own car to get to her patients’ homes, and at the end of 2021, she decided she needed a more efficient car. She ended up at Red Rock Nissan, where she traded in a 2015 Jeep Grand Cherokee with almost 100,000 miles on it for a 2019 Subaru WRX with about 17,500 miles on it.

The transaction happened late on a Monday. Katelyn said, “It was a super-rushed purchase because it was past closing time, as it took awhile to get me approved for the loan amount.”

After hearing about other people whose names were forged by Red Rock and all the other problems people had had with their purchases, she was prompted to more closely examine her documents for the purchase of her vehicle, and on December 22, 2022 she took another good look.

She noticed a slew of problems. Not only did Red Rock charge more for her vehicle than what was on the window sticker, but they also charged her $1,495 for a “Resistall” treatment she was told would be included. “I would have never added that on because I take really good care of my vehicles myself,” Katelyn said.

They also charged her $119 for “Worry-Free gas,” even though the window sticker on her Subaru said a full tank of gas was included.

She also somehow ended up signing a contract for a $3,495 extended warranty that she did not want.

Ironically, though, that extended warranty contract was the only document out of all the paperwork that bore her true signature.

All of the other signatures, she says, are not hers: 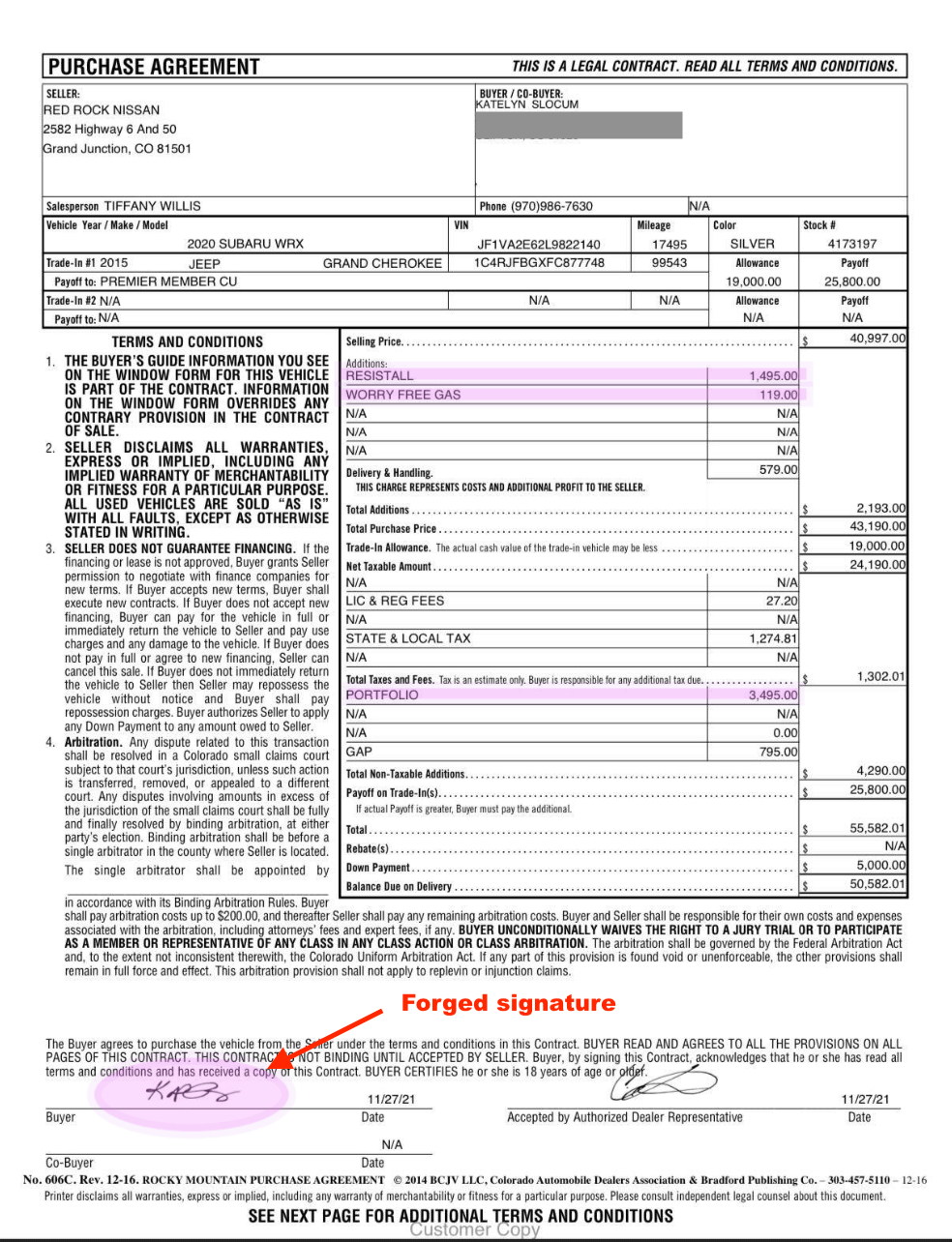 Katelyn’s contract for the purchase of her Subaru. She says the signature on this contract is not her signature. “Portfolio” is Red Rock’s name for an extended warranty. They do not include any descriptive words, like “extended warranty,” that would tell buyers they are purchasing an extended warranty. “Worry Free Gas” was charged at $119, but a full tank of gas was supposed to be included in the deal, and even if purchased would have cost far less than $119, since the Subaru’s tank holds less than 16 gallons. 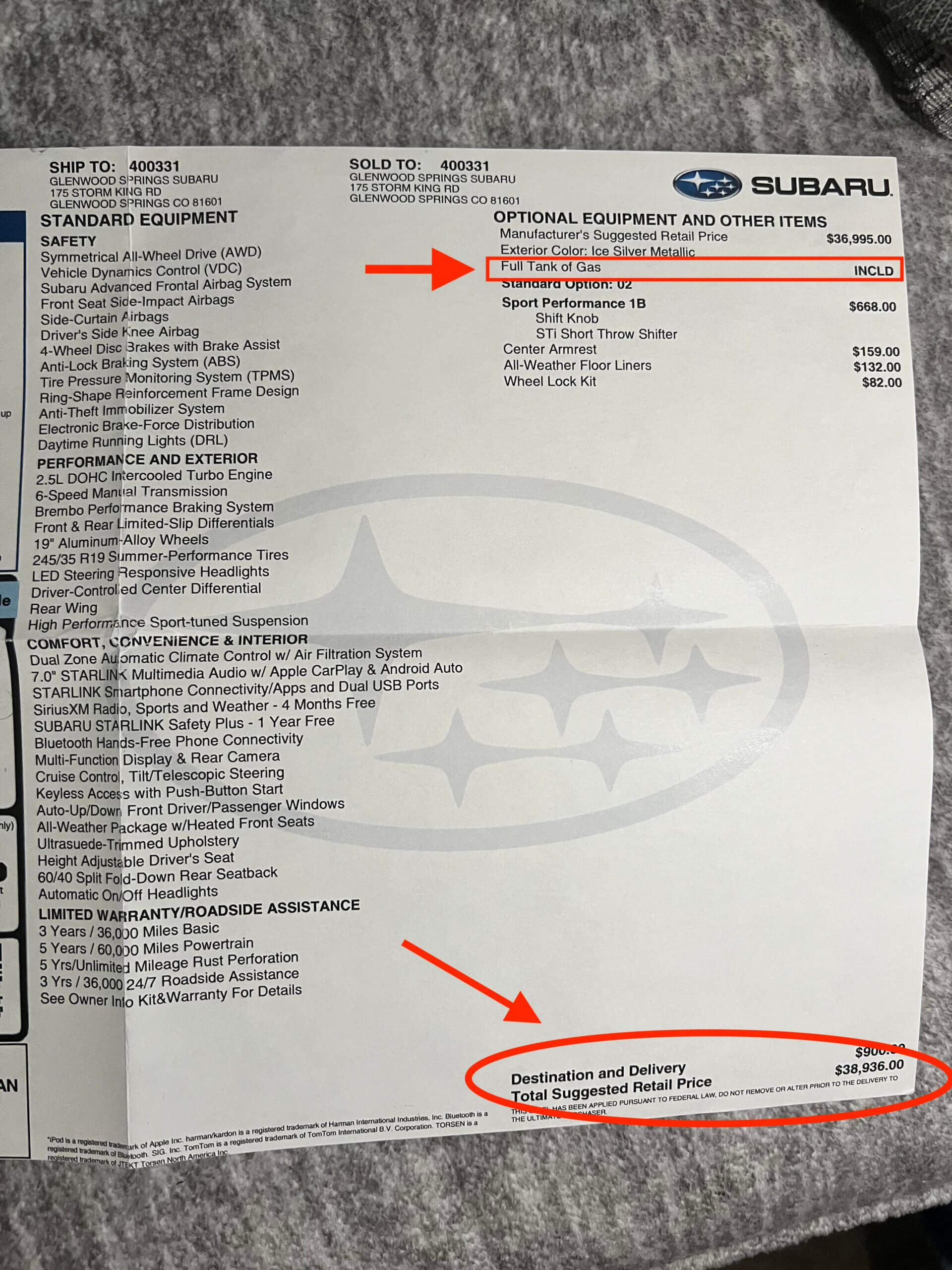 Window sticker from Katelyn’s Subaru saying a “full tank of gas” was “included” in the deal, and displaying the Total Suggested Retail Price of the vehicle at $38,936. The selling price on her contract was $40,997, over $2,000 higher. 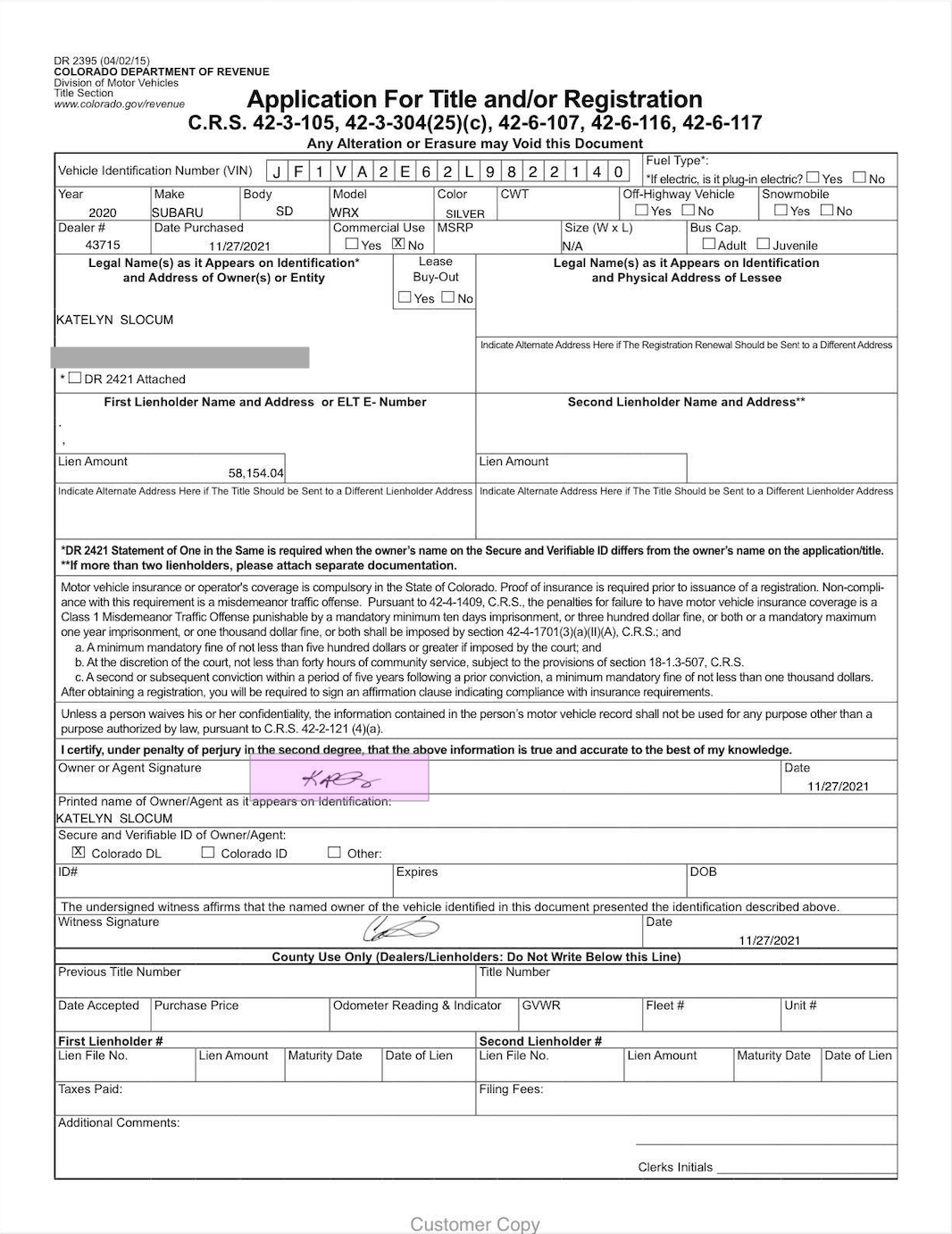 The signature on Katelyn Slocum’s title application, which she says is not her signature. The “Witness signature” is by Collin Jones. 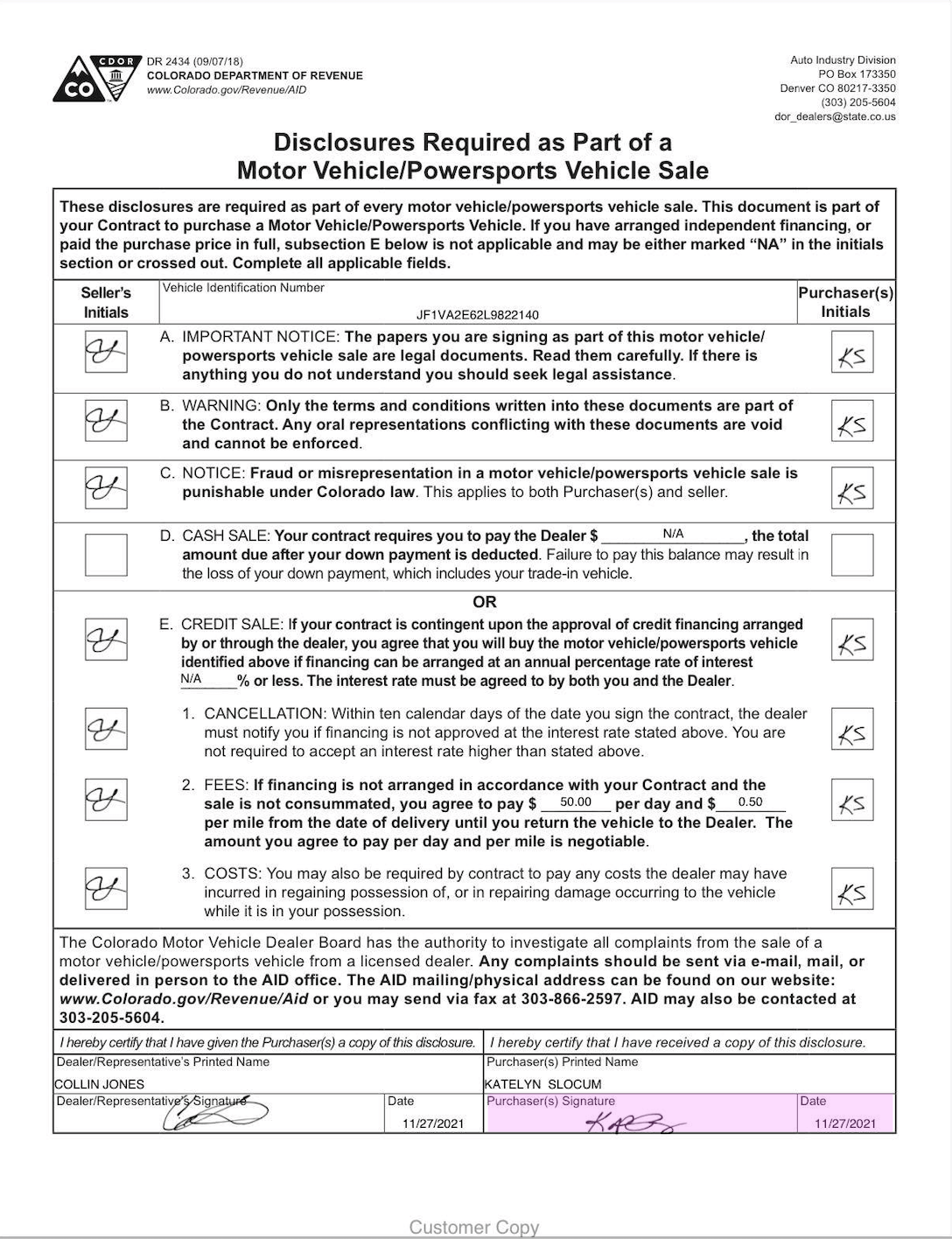 Disclosures page of contract with “Purchaser’s Signature,” which is not Katelyns’ real signature. 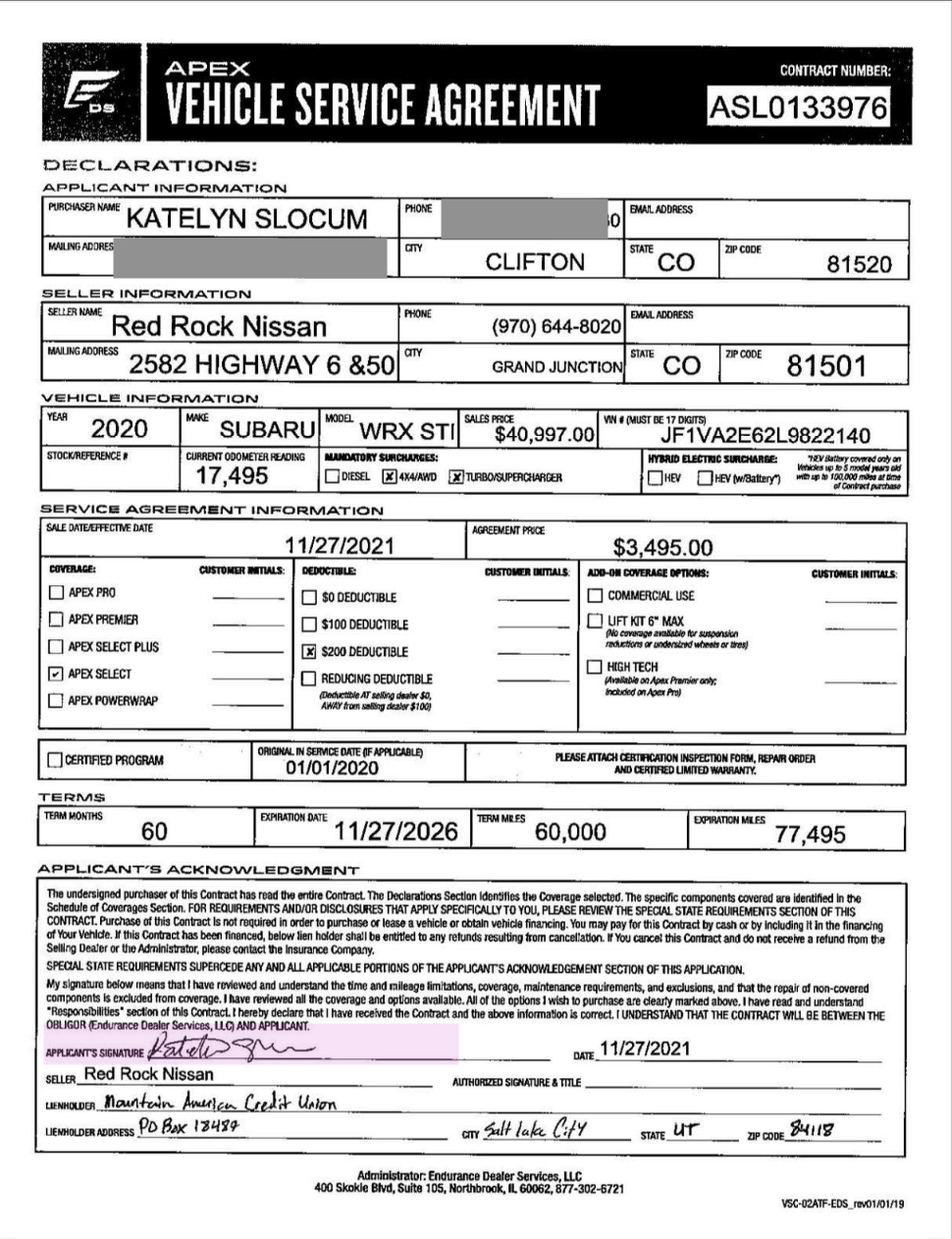 Katelyn’s extended warranty contract, the one document with her real signature on it.

If you have purchased a vehicle at a Red Rock dealership, looked at your documents afterwards and found any of the buyer’s signatures are not your own, file a complaint with the Colorado Department of Revenue’s Auto Industry Division at this link. The Auto Industry Division regulates dealerships in the state. Have images of the documents ready to upload, to substantiate your complaint. Also, fill out a Fraud Packet with the Grand Junction Police Department. Once you’ve completed the packet, call the Grand Junction Police Department’s non-emergency dispatch line at 970-242-6707 to schedule an appointment to have your report taken in person. Bring all of your original documents to that meeting to substantiate your complaint.

In Colorado, forgery of a contract with intent to defraud is a Class 5 felony.