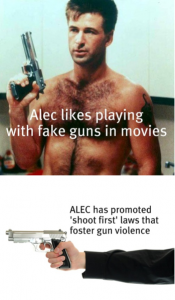 As corporations continue to flee the embattled American Legislative Exchange Council, ALEC is struggling to stop the bleeding with a new a damage-control website called “IStandWithALEC.com,” that blames former Obama administrator Van Jones, George Soros and “Big Labor” for recent woes that have put the group on the hot seat.  But as soon as ALEC put up its new site, the controversial group was met with yet another activist challenge: a hilarious, new competing one-page website with the very similar domain name, “IStandWithALEC.org,” that features pictures of Alec Baldwin and says, “I stand with Alec, not ALEC.” The site is filled with funny pictures of Alac Baldwin and statements contrasting how nice Alec Baldwin is and how mean ALEC is, like “Alec Baldwin created a scholarship for low income drama students…ALEC creates scholarships for corporations to funnel money to legislators,” and “Alec likes surfing the web naked,” but “ALEC wants you to pay 750% more for high-speed Internet.” The site asks visitors to “Join our efforts to stand up to front groups like ALEC!” The dueling websites make it clear that anti-ALEC activists aren’t cutting ALEC much slack these days, no matter what corporate PR strategy it tries to try and escape from its death spiral.