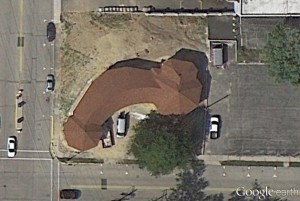 The Christian Science Society of Dixon, Illinois building as seen on Google Earth.

When people search for the Christian Science Society’s building in Dixon, Illinois on Google Earth, they’re in for a little surprise. When viewed from the heavens, the building looks like a large brown penis. The church group explains that the building was designed to spare the large oak tree growing in front of it instead of cutting it down, and that the building is energy efficient because of all the south-facing windows.  The church’s motto is “Rising up.” The congregation has a sense of humor, though. They “photoshopped” the Google Earth picture to place a giant fig leaf over their building. Still, when directing people to a map of how to get to their congregation, they use Bing.