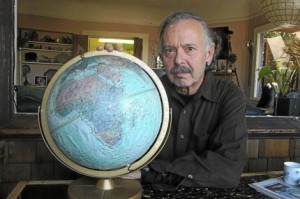 A University of California, Berkeley physics professor and longstanding critic of prevailing global warming science has reversed course and now attributes climate change directly to greenhouse gases produced by human-related activities. Professor Richard A. Muller, a climate change skeptic in the past, has taken funding from the Charles Koch Charitable Foundation named after billionaire Charles G. Koch, owner of the big petrochemical conglomerate Koch Industries and one of the most prolific funders of climate change denial and misinformation on Earth. Muller says a research project he undertook actually showed “that the average temperature of the Earth’s land has risen by two and a half degrees Fahrenheit over the past 250 years, including an increase of one and a half degrees over the most recent 50 years. Moreover,” he says, “it appears likely that essentially all of this increase results from the human emission of greenhouse gases.” Muller further concludes that “Humans are entirely the cause” of global warming. He calls his stance a “total turnaround” from the way he used to think. Muller authored an opinion piece in the Saturday, July 28 issue of the New York Times titled “The Conversion of a Climate-Change Skeptic.”