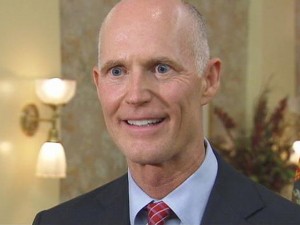 Under the guise of preventing voter fraud — a virtually nonexistent problem in Florida — the state of Florida is demanding tens of thousands of American citizens provide proof of citizenship to the state in person or lose their right to vote. Acting on a directive from Governor Rick Scott, Florida’s secretary of state sent letters to 180,000 voters to be stricken from the voter rolls unless they prove to the state that they are, in fact, citizens. Recipients were told they must attend an administrative hearing in person to provide proof of their citizenship. The list includes many people falsely flagged as non-citizens, including 91 year-old Bill Internicola, a World War II veteran who won a Bronze Star for bravery, and Maureen Russo, a 60 year old business owner who has been a registered voter in Florida for 40 years. ThinkProgress estimates that more than 20 percent of the voters flagged as non-citizens in Florida are actually full-fledged citizens. The massive purge of voters by Florida’s Republican administration comes at a time very close to the impending general election this fall, giving falsely-accused voters minimal time to correct the records. The purge also disproportionally affects Democrats. Two thirds of the supposed non-citizens on the purge list live in Miami-Dade County, which leans heavily Democratic. In response to information that legitimate citizens are being targeted for purging from the voter rolls, Gov. Scott defiantly vowed to intensify his efforts to remove voters from the rolls.