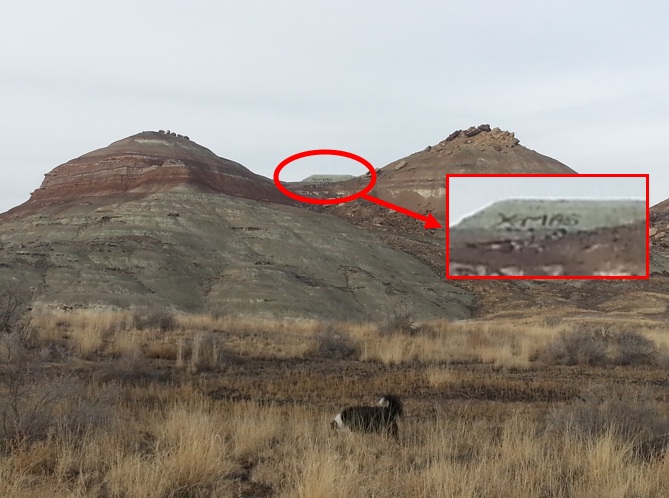 For about five years, an unknown person has been climbing a slippery hill high on the Redlands and scratching brief messages into the greenish bentonite, and turning the hill into an ersatz billboard. The hill is just to the north of the intersection of Monument Road and South Camp Road. The messages are always in capital letters. They change frequently and consists of just four letters. It’s no easy task to make them, either. The letters are probably at least 10-12 feet tall. The messages are usually timely, too. At Mother’s Day, the hill says “MOM.” Near Father’s Day, it says “DAD.” Near the full moon it will say “MOON.” Other times, it has said “HELO,” or is just some cryptic anagram that leaves viewers scratching their heads. At the moment it says “XMAS.” If you stand near the northeast corner of Monument Road and South Camp Road and look towards the bentonite hills to the northwest, you can see it. Look for a greenish hill located between two higher, red-striated peaks. Check out what it says.

Want to take some bets on what it might say next? My guess is it might soon say “2015.”