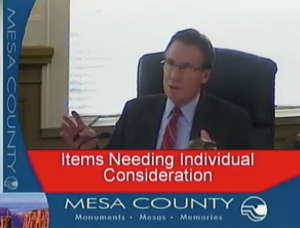 Mesa County Commissioner Scott McInnis verbally dressed down an ideologically pure Mesa County ultra right wing nut who spoke before them on Monday, Feb. 8, 2016, who urged them not to accept federal funds to fix a dangerous flood area along I-70 where one person has already been killed

The fireworks started with a discussion of whether Mesa County should accept a $2.1 million grant to build a detention pond in Bosley Wash at the bottom of the Bookcliffs. The wash has been the site of several flash floods in recent years resulting one person getting killed, several private properties being repeatedly covered in mud and silt and massive mudflows pouring over I-70.  Bosley Wash endangers a total of 200 properties near the base of the Bookcliffs between Clifton and Palisade.