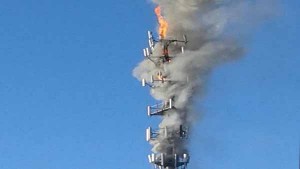 A cell phone tower fire in Georgia in Dec. 2011 that required two homes and a daycare center to be evacuated. Photo credit: CBSAtlanta.com

After residents of DeKalb County, Georgia actively opposed plans by T-Mobile  and AT&T to build telecommunications towers on the grounds of eight local public schools, Georgia State Representative Karla Drenner stepped up to the plate to help out. Rep. Drenner introduced HB 1197,  “Cell Phone Towers in DeKalb County,” that would ban placing cellphone towers on public school grounds unless the cellular carrier can show that there is an absolute need for the tower, and that the location sought on school grounds is the only location that can adequately provide service to satisfy that need. Sixteen out of 18 DeKalb County representatives signed on to support the local bill. Support for the measure crossed political, racial and geographic lines. Citizens in favor of the bill also got support from all of their county commissioners and collected over 1,200 signatures on petitions supporting the measure — an admirable number considering Chuck Sims’ represents a county of only 380 people. A legislative committee heard three hours of testimony about the bill over three days at three separate state hearings, and not one person showed up to say they were in favor of plans to put the towers on school grounds. With support like that, the bill should have passed easily through the committee and moved to the House floor. But it didn’t. Why?