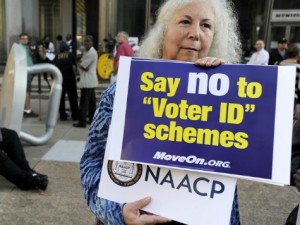 When will media start reporting that Voter ID laws are, in fact, designed to make it harder for certain voters to access the polls?

Fairness and Accuracy in Reporting (FAIR) is taking the New York Times to task for portraying the attack on voting rights in the U.S. as little more than a partisan disagreement. According to the NYT, Republican-enacted laws to shorten early voting periods and force voters to show identification cards are designed to prevent voter fraud, while Democrats say such fraud is nearly non-existent and these restrictions are a Republican effort to disenfranchise poor and minority voters.

But the Times failed completely to report on the actual facts pertaining to the issue of voter fraud in the U.S.

On many occasions Republican politicians have actually admitted that voting restrictions are, in fact, aimed at disenfranchising Democrats. Additionally, no Republican has ever been able to show that any American election was stolen as a result of in-person voter fraud. Not one.

Law professor Justin Levitt since 2000 has tracked down and analyzed “every specific, credible allegation that someone may have pretended to be someone else and the polls, in any way that an ID law could fix.” He found only 31 incidents over 15 years and over more than a billion ballots cast. Most of the incidents were due to voters misunderstanding the voting eligibility rules or making mistakes filling out registration forms. Levitt concluded that “There is almost no voting fraud in America,” and “The only reason Republicans are passing these laws is to give themselves a political edge by suppressing Democratic votes.”

Despite this, the New York Times failed to state that voter restriction laws are, in fact, an ongoing effort by Republicans to disenfranchise voters and gain an electoral advantage. Rather, the paper reports on the issue as though it is merely a disagreement over the facts between Republicans and Democrats.

Source: Jim Naureckas, Fairness and Accuracy in Reporting, March 9, 2015, “Voting Rights Shall Not Overcome NYT Reporting Like This”