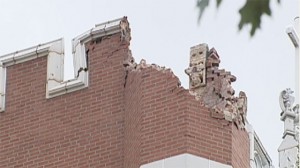 Damage from the 2011 Oklahoma quake

A six-fold increase in the frequency of Richter-scale 3.0 and greater earthquakes occurring in the middle of the country correlates with increase in hydraulic fracturing or “fracking” occurring in those locations. In a new paper, scientists present a series of examples in which a significant increase in seismic activity occurred in areas where oil and gas producers increased their disposal of wastewater in deep injection wells. Between 1970 and 2000, the central area of the country averaged 21 earthquakes per year. In 2009, that average jumped to 50, in 2010 it increased to 87, and in 2011, the average rose to 134 quakes per year. While most of the earthquakes are fairly small, the 5.6 magnitude earthquake rocked Oklahoma last year and  damaged buildings and increased speculation that injection wells in the area might be a cause.  It was the largest earthquake ever to strike Oklahoma, an area without a reputation for earthquake activity. The summary of the new earthquake study from the University of Memphis, says, “Based on the previous injection history, proximity of the wells to the earthquakes and the previous seismic activity in the source area, the M5.6 earthquake [in Oklahoma] was possibly triggered by fluid injection at these wells.”