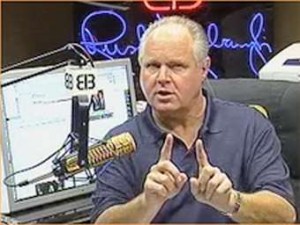 Twenty advertisers have now officially pulled their ads from Rush Limbaugh’s show on KGVO talk radio in Missoula, Montana, and the airwaves went dead during his show not once, but twice — and for more than a minute each time — on Friday, May 20th. Another sign Limbaugh could be in trouble in Missoula: KGVO has started broadcasting brief comedy bits during what would normally be blocks of advertising time on Limbaugh’s show, according to listeners from RushOutOfMissoula.com, the effort to push Limbaugh off the radio in Missoula.  RushOutOfMissoula.com posts a frequently-updated list of current advertisers on Limbaugh’s show on their web page, along with the businesses’ contact information, and asks people to contact the businesses and ask them to “stop putting money in that bully’s pocket” by pulling their ads. The web page urges callers to remain polite and respectful. Many advertisers have pulled their ads as a way to remain neutral in the conflict. Businesses still advertising on Limbuagh’s show on KGVO include Allegiant Airlines, Adair Jewelers, Air Quality Mechanical, Bagels on Broadway, Edward Jones, Furniture Row, Hoagieville, Lithis Chrysler, The Montana Club, the Ravalli Family of Banks and Time Rental.  Jim Adair, owner of Adair Jewelers — one of the remaining local advertisers on Limbaugh’s show in Missoula — is fighting back by increasing his ads on the show, and running ads saying he is being blackmailed by people who want to take all talk radio off the air.  RushOutOfMissoula.com reports that 1,751 people have now signed their petition asking KGVO to take Limbaugh off the radio in their town.  RushOutOfMissoula.com was organized after Limbaugh carried on a three day tirade against Georgetown law student Sandra Fluke late last February in which he called her a “slut” and repeatedly derided and insulted her for testifying before Congress about the need to fund women’s health care.

1 comment for “Is the Limbaugh Show on the Ropes in Missoula?”