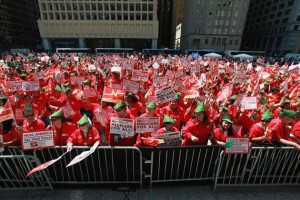 Nurses rally in Chicago to support the Robin Hood Tax

Nurses led a rally in Chicago May 18 ahead the NATO summit to boost the idea of instituting a “Robin Hood Tax,” a tiny tax on financial institutions’ transactions that would be used to offset drastic cuts in education and social services, and provide health care to Americans. Also called a Financial Speculation Tax, the tax has the support of Warren Buffett and Bill Gates, as well as President Hollande of France, Chancellor Merkel of Germany, Prime Minister Zapatero of Spain and other world leaders, as well as Nobel prize winning economists Joseph Stiglitz and Paul Krugman. The Robin Hood Tax on bankers would be less than one-half of one percent on deals over $100, and would apply to transactions like trades in derivatives, stocks, bonds and foreign currency exchanges. The charge would total less than one half on one cent on every $100 worth of transactions. Most ordinary people worldwide would never feel it, but experts estimate it would generate hundreds of billions of dollars each year to fight poverty and support public services like education and health care. National Nurses United teamed with National Peoples’ Action and local community groups to organize the rally. The were joined by veterans, members of the Occupy Movement, unions and others. The rally was part of a “global week of action” in support of the Robin Hood tax, with rallies also happening in Europe, Africa and on Mount Fuji in Japan.