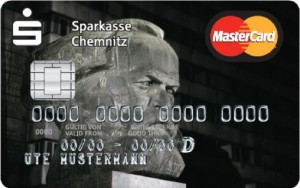 The Sparkasse Bank in Chemnitz, in eastern Germany, asked customers to vote on images they would most like to see on their MasterCards, and by far the winner was Karl Marx, the German philosopher who predicted the end of capitalism. More than one third of people voting selected Marx’s image. The bank reports that even people in western Germany were calling and asking to open bank accounts to get a MasterCard with Marx’s image on it. Reuters reports that a survey done in 2008 revealed that 52 percent of citizens living in eastern Germany thought the free market economy was “unsuitable” and 43 percent preferred to go back to a socialist system. NPR’s Planet Money, in a report on the Karl Marx MasterCard, asked people to suggest possible slogans to advertise the card. Some of the responses?  “Che Guevara t-shirt: $15. Annotated copy of the Communist Manifesto: $10. Being able to demonstrate your ideological confusion every time you make a purchase: Priceless.,” “I don’t always seize the means of production from the bourgeoisie, but when I do, I prefer the Marx MasterCard,” “A Mastercard for the master race,” and my personal favorite: “Use it when you’re in the red.”