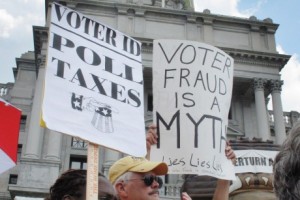 The Palm Beach Post ran a blockbuster story November 25 in which several former high-up GOP officials admitted that “Voter ID” laws and a law cutting back early voting were GOP tactics aimed at suppressing the Democratic vote in Florida. Former Florida Republican Governor Charlie Crist and Jim Greer, former chair of the Florida Republican Party, both admitted that the GOP’s push to enact “Voter ID” laws out of a purported concern for voter fraud was really a ruse to block Democratic voters from the polls. Greer told the Palm Beach Post, “The Republican Party, the strategists, the consultants, they firmly believe that early voting is bad for Republican Party candidates…It’s done for one reason and one reason only.” Greer said Republican staffers and consultants told him ,”We’ve got to cut down on early voting because early voting is not good for us.” Wayne Bertsch, who coordinated campaigns for GOP candidates for local offices, also admitted the reasons GOP officials gave for advancing voter ID laws were bogus. Crist said while he was in office as Florida’s governor, Republican Party leaders contacted him to discuss curtailing early voting hours as a way to suppress turnout among Democratic voters. Crist has since left the GOP and is now an Independent.  Greer has been indicted for using a phony campaign fundraising operation to pocket $200,000. But the Post also found another GOP-affiliated consultant, who asked not to be named who confirmed that the true purpose behind enacting voter ID and a law to cut back on early voting in Florida were meant to suppress Democratic turnout in the general election.