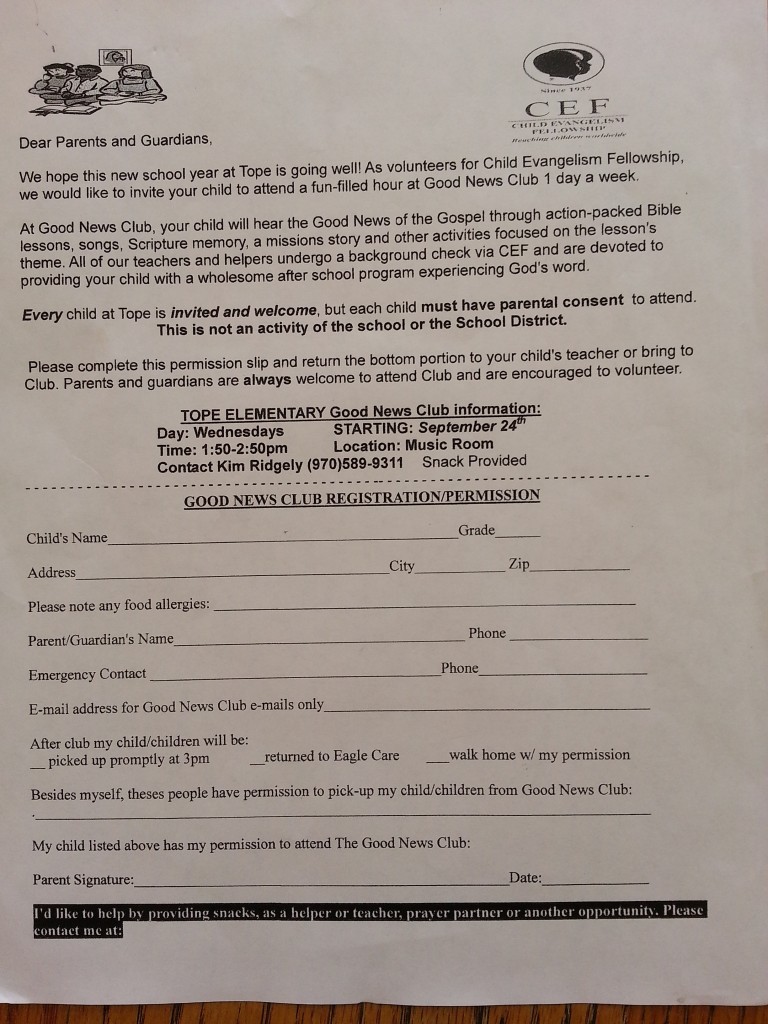 Many Grand Junction-area citizens are wondering how a group like the Child Evangelism Fellowship (CEF), whose mission is converting as many children as possible to Christianity, could hold Bible study classes for elementary school-aged kids in taxpayer-funded public schools in School District 51, which tries hard to avoid endorsing specific religions. The Good News Club (GNC) says it is just trying to improve life for children all across the country.

But critics of GNC argue that the Club is really bad news for kids, because it purposely strives to make them feel guilty and shame them with lesson plans that describe Jesus’ death in vivid terms and tell children they are personally responsible for it.

“The Lord Jesus suffered terrible beatings, then He was cruelly nailed to a wooden
cross, where He bled and died…  As Jesus hung on the cross, God punished Him for
your sin and your deceitful heart.” Patriarchs, p35.

“He chose to die for you. As the nails were driven into His hands and feet and His blood flowed out, God was punishing His Son for your sin…. Jesus was willing to die this awful death… After Jesus suffered and died for you, He was buried in a tomb….” Life of Christ, Book 2, p30.

“First you need to agree with God that you are a sinner and are separated from him because of your sin. Be sorry for your sin and ask God to change you…” Paul: God’s Servant, p. 44

The Clubs tell children that they are desperately wicked and “deserve to die.”

Taylor says CEF’s effort to bring D-51 elementary school kids into Christianity has created a heated conversation among principles, and it is making them uncomfortable. She explained that D-51 has been under pressure from CEF for at least three years now, and letting them into the schools is the result of the group bringing a lawsuit against D-51.

CEF first asked to hold after school Bible study classes at Shelledy a couple of years ago. Shelledy’s principal refused to allow the club because its religious nature, and the District tries to out of any involvement in religious matters. CEF then sued District 51 for the right to hold their bible study classes at Shelledy. CEF has been very aggressive in bringing legal cases like this to get their conversion clubs into the schools. In 2001, CEF won a victory in the U.S. Supreme Court (Good News Clubs v. Milford Central School). In that case, the Court ruled that schools cannot discriminate against the group because of its religious nature. There is also a 1984 law called the Equal Access Act that says if schools send home outside information with kids, they must either send home everything people ask them to send about outside activities, or nothing at all about these activities.

The 2001 Supreme Court ruling in Good News Clubs v. Milford Central School meant that there was no way D-51 could possibly win the lawsuit against CEF, so they had to let them into the schools.

Given that history, here is D-51’s current policy, as Cheri explained it:

Each school can make of three choices:

Option #1: They can send home absolutely no information to parents about anything other than District 51. For example, they can send out information about in-school volleyball tryouts, but not about an after-school club like 4-H or Future Farmers of America;

Option #2 They can send out absolutely ALL inside and outside information to parents, as long as it isn’t about anything illegal, or

Option #3: They can make all information from entities both inside and outside the school available in the form of literature on a table in the front office, without taking steps to send information home to parents.

Few schools have chosen the “nothing at all” policy because it eliminates access to information about needed services. Presumably Option #3 isn’t used much, because less District 51 information will get to parents that way.

What all this means is that any group or individual, without regard to topic or ideology, can apply to use school facilities to make any kind of presentation, organize a club or give any kind of instruction they want to kids on school property or in school buildings. The school system picks up the cost of providing the space and utilities. The only limitations are that 1) the program being given must be relevant to the kids’ age and 2) it must not promote illegal activity. All you have to do is reserve a school’s facilities through D-51’s main office, and fill out and sign a contract agreeing to the rules for use of the facility. District 51 MUST let all organizations use their facilities, without discrimination. Permission slips are required for any kind of after-school activity, and D-51 relinquishes all liability for the children’s safety if they attend voluntary meetings organized by a third party after school hours on school grounds. Organizers or presenters of such after-school events do not need to undergo background checks. The District does not have to, and will not, provide security for any kind of potentially controversial presentation or event.

Some additional information we got from District 51 that may be of interest to area citizens:

1) All District 51 students have the right to opt out of having to say the Pledge of Allegiance every day;

2) District 51 has a no-carry policy with regard to firearms;

3) Many teachers who have been fired from District 51 schools get hired by local charter schools.

4) The school district’s overall message is that they try to do the right thing, but they sometimes get caught in the middle, like they have this time. They have no intention to harm any group or individual.

What can be done?

Parents can attend GNC sessions and monitor them for frightening narratives or other problematic content. Parents can also ask to have the Good News Club excluded due to the need to protect the emotional, psychological and intellectual well-being of children. Good News Clubs teach children to reject science, fear critical thinking, and stigmatize non-believers.

The Milford decision does not prevent schools from adopting policies designed to protect children. A model use policy that would allow schools to refuse to host Good News Clubs on legal grounds can be seen here.(pdf)