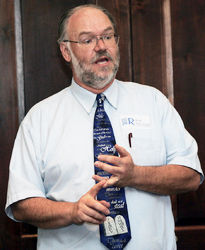 “2014 Lion of the Year” Circumvented Constitution

Theobold was the Lion’s Club 2014 Lion of the Year and was such a revered figure locally that he had a press box at Stoker Stadium named after him.

As mayor, Theobold was also responsible for spending $65,000 is taxpayer funds to keep the Ten Commandments tablet on City Halls grounds, after city residents and the ACLU sued the City saying the tablet was an illegal endorsement of Christianity on public property.

A church across the street from City Hall offered take the Ten Commandments monument and display it on its corner free of charge to get the City off the hook for the lawsuit, but Theobold would have none of that, instead preferring to spend tens of thousands of dollars keep the religious monument on publicly-owned land.

Theobold came up with the idea of attempting to disguise the Ten Commandments as a historic, rather than a religious document by surrounding it with stone tablets of secular documents like the Magna Carta, Bill of Rights and the Mayflower Compact. This circumventing of the U.S. Constitution effectively ended the lawsuit and resulted in the costly “Graveyard in front of City Hall,” also known locally as the “Trample on the Bill of Rights Plaza.” Unfortunately, the move was also highly divisive, and left some city residents insulted by the City’s overt preference for Christianity.