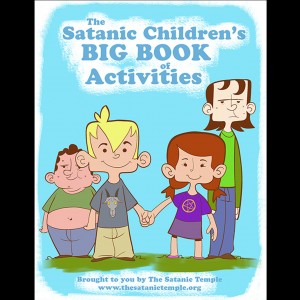 A locally-produced brochure about atheism called “It’s Okay to Not Believe in God” (pdf), the Satanic Children’s Big Book of Activities and other literature critical of the Bible and Christianity will be distributed to Delta Middle School (DMS) students if the Freedom From Religion Foundation (FFRF) gets their way.

Three groups — the Freedom From Religion Foundation, Western Colorado Atheists and Freethinkers and the Satanic Temple — have all submitted literature to Delta public schools for approval for distribution in an effort to get Delta County Schools to stop distributing Gideon Bibles to students during class time.

Aim is to Counter Bible Distributions During Class

In December, 2015, a student reported that Delta Middle School (DMS), a public school, was distributing Gideon Bibles to students during class time.

The student reported to her mother that her social studies teacher took her class to the library to work on a project, and once there the teacher pointed to a pile of Gideon Bibles on a table and told students to take them because “they’re free.” The student is an atheist who did not take a bible and got harassed and bullied by other students as a result. She recognized the bible distribution violated her right to be free from religious coercion at school and texted a photo of the bibles and a description of the situation to her mother, who contacted the DMS Principal Jennifer Lohrberg and School District Superintendent Caryn Gibson. Both administrators responded that the bible distribution was done in accordance with the district’s policy for literature distribution.

After getting blown off by the school district, the family asked Western Colorado Atheists and Freethinkers (WCAF) for help. WCAF contacted the principal and superintendent on the family’s behalf and again notified them about the legal and policy violations going on at DMS, but got similar reassurance that all was done in accordance with school policy as well as a statement that the school district respects the separation of church and state. 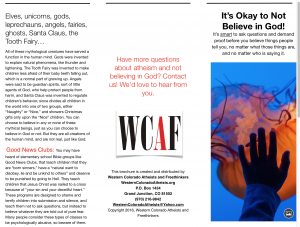 After the second brush off, WCAF and the family contacted FFRF for help, and FFRF attorneys got involved.

School District Admits to FFRF Attorney, But Not to the Parent, that it Violated Policy

In January 2016, FFRF staff attorney Andrew Seidel wrote to DCSD attorney Aaron Clay about the multiple violations (pdf) of both District policy and law going on at DMS, and asked that the school acknowledge the violations, stop allowing bible distributions and other forms of proselytizing in schools and ban the Gideons from further literature distribution in accordance with Policy KHC-R.

Delta County School District’s Policy KHC-R (pdf) prohibits distribution of non-curricular literature in classrooms during regular class hours and says groups that disobey the rules can be banned from further literature distribution. The policy also states literature can be distributed only one half an hour before school, during the lunch period, and/or 15 minutes after school. The Gideons’ December bible distribution skirted the rules on several counts, but the group received no consequence. 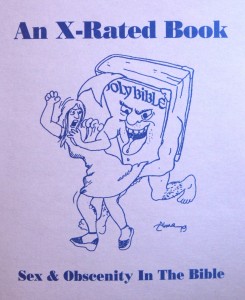 FFRF’s brochure, titled “An X-Rated Book: Sex and Obscenity in the Bible”

In a written response to FFRF (pdf), DCSD attorney Clay admitted that the Gideons had violated District policy, but refused to ban them from further literature distribution, saying the violations were the fault of school personnel (pdf), and not the Gideons.

After it became apparent the school distroct would not stop distributing religious literature to students, FFRF then asked to distribute its own non-religious literature, as well as that of the Satanic Temple and Western Colorado Atheists and Freethinkers.

Some titles the groups seek to distribute include:

FFRF Sued Another School District Over the Same Situation in 2013, and Won

In 2013, FFRF asked the Orange County, Florida School District to stop distributing religious literature to students. The school refused to change its so-called “open forum” policy on literature distribution and persisted in distributing religious material, so FFRF asked to distribute its own literature and that of the Satanic Temple. When the school refused these groups’ literature, FFRF sued the school district for the right to distribute, saying the school was discriminating against them because of their message in violation of the First Amendment. After two years and $86,000 in legal costs spent trying to fight the suit, in 2015 the Florida school district gave up and agreed to ban the distribution of all religious literature — the remedy FFRF sought in the first place.

Now Delta County School District faces the exact same situation. We’ll see if they will approve these groups’ literature or go down the same path as the Orange County, Florida schools and get slapped with a lawsuit by FFRF, which will surely come next if they don’t.