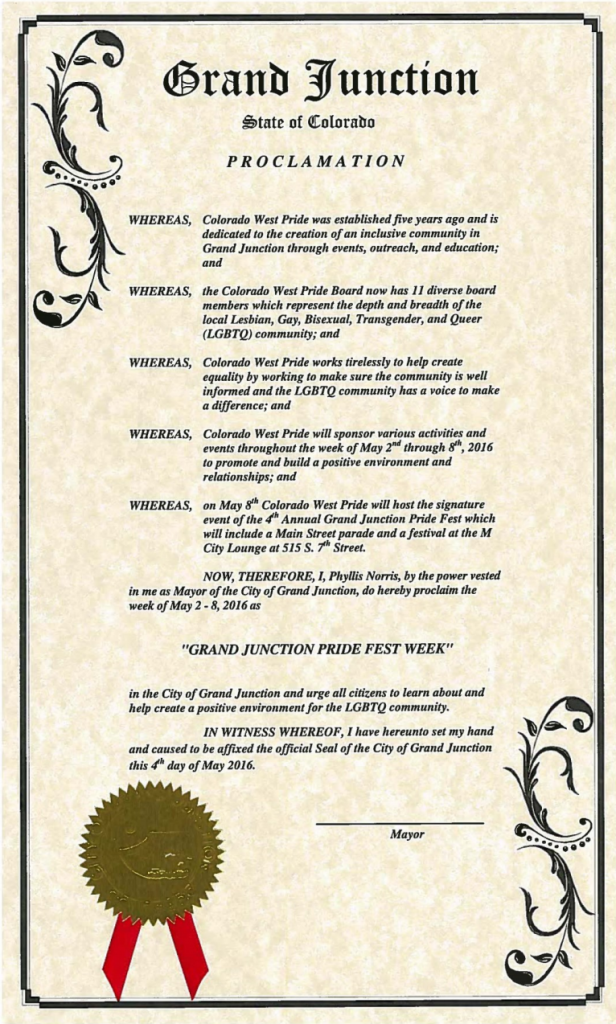 In a landmark action towards welcoming diversity in our community, at its Wednesday, May 4, 2016 meeting, the Grand Junction City Council will officially declare May 2nd through May 8th, 2016 “Grand Junction Pride Fest Week.”

The full proclamation, available as a link on the City’s website (click on May 4 agenda), states in part:

“WHEREAS, Colorado West Pride was established five years ago and is dedicated to the creation of an inclusive community in Grand Junction through events, outreach and education; and

WHEREAS the Colorado West Pride Board now has 11 diverse board members which [who?] represent the depth and breadth of the local Lesbian, Gay, Bisexual, Transgender and Queer community; and

WHEREAS Colorado West Pride will sponsor various activities and events throughout the week of May 2nd through 8th, 2016 to promote and build a positive environment and relationships” which will include the Grand Junction Gay Pride parade and festival,

“NOW, THEREFORE I, Phyllis Norris, by the power vested in me as Mayor of the City of Grand Junction, do hereby proclaim the week of May 2-8, 2016 as “GRAND JUNCTION PRIDE FEST WEEK…and urge all citizens to learn about and help create a positive environment for he LGBTQ community.”

The proclamation is the first official action the Grand Junction City Council has ever taken to call attention to the need to welcome and respect diversity in town.

Now, if we can just get City Council to stop praying to Jesus at the beginning of their meetings, the City will truly be in accord with multiple official proclamations on its website that the City does, in fact, embrace diversity. The City says on its website,

“We are mindful that this 21st century brings a new diversity of citizens. We must strive to make our government sensitive to the values of Americans with minority views, whether religious, political or otherwise.” [Italicized emphasis added.]