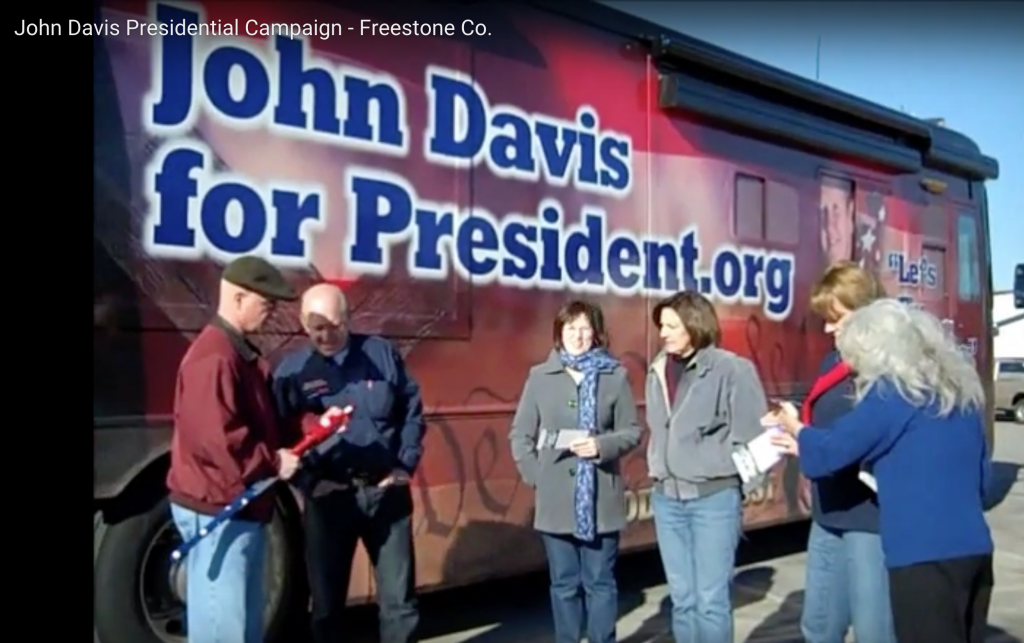 Another doozy of a Republican candidate is running for local office, this time against Mesa County Commissioner District 1 incumbent John Justman.

The local Republican Party just keeps them coming, don’t they?

Who is John Davis, anyway?

He is the owner of Blue Star Construction, the headquarters of which are in a prefabricated building on 25 Road, just north of the Sinclair gas station at 25 and Patterson Roads. It’s the company with the out-sized 100×50 foot American flag on a 160-foot flag pole that is visible for miles around.

Davis’ banner ad from his run for U.S. President in 2012. He repeatedly cites his religion in promoting himself, but also espouses reverence for the U.S. Constitution, which guarantees separation of church and state

According to his biosketch, Davis graduated from Central High School in 1975 “several times over.” In general we take a statement like that to mean he flunked out numerous times. (If this isn’t the case, it would help if Davis clarified his educational status for voters.)

So what else makes John Davis qualify as another wacky Republican running for local office?

John Davis ran for President of the United States in 2012.

He had a big campaign motorcoach with his name professionally painted on the side. He toured the country, visiting over 600 counties while on the stump, and relied solely on coverage by Fox News and Hannity to promote his candidacy. He told reporters he didn’t appear in the Republican presidential debates because he “didn’t have time.” He was known for slinging a large wrench painted with the stars and stripes while pacing around during reporter interviews about his candidacy. Davis’ “platform” was the predictable and unimaginative “get government out of the way of business” meme typical of GOP candidates.

Back in 2012, Davis told the Grand Junction Daily Sentinel that if he made it to the White House, he would “post a sign declaring, ‘As for me and my house, we will serve the Lord.’”

But in the same interview, he also told the Sentinel he didn’t really want to be President.

When asked why he was running for President, Davis said “By the grace of God, I will make a difference in preserving freedom.” All this indicates Mr. Davis doesn’t grasp the meaning of the U.S. Constitution, which guarantees separation of church and state.

So let’s see…a contradictory, hyper-religious, self-important candidate who barely made it out of high school, with a bigger-than-life American flag, a full size motorcoach with his name painted on it, an attempt to run for President of the U.S,… It all points to a man with a desperate need for attention, and this time he’s trying to get it by running for Mesa County Commissioner.

All this is in keeping with the historic tradition of the Mesa County Republican Party of running poorly-qualified candidates with embarrassing histories who represent a party that seems to be imploding under the weight of its own nuttiness.

All this could bode well for the far saner and more qualified Democrats who are running for County Commissioner seats in Districts 1 and 3 this November. It could also provide a desperately-needed turning point for Mesa County.