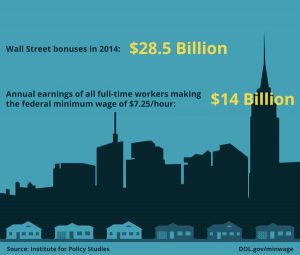 The U.S. Department of Labor says that in 2014, the Wall Street bonus pool was roughly twice as much as all U.S. minimum wage workers’ pay combined

On August 1, 2016 the Grand Junction Area Chamber of Commerce announced its opposition to a ballot initiative to raise Colorado’s minimum wage to $12/hour. The main reason the chamber gives for opposing the higher wage is a claim by Economics International Corporation — a company located in Portland, Oregon — that raising the minimum wage in Colorado will put 90,000 Coloradans out of work, mostly younger people.

So who is “Economics International Corporation”?

It is a one person consultancy run by a man named Eric Fruits, who hires himself out as an expert witness in economics and statistics. The official registered business location of Economics International Corporation is “4318 NE Royal Court, Portland, Oregon 97213,” a four bedroom, three bathroom home. Fruits is the sole registered officer, agent, president and secretary of the corporation. 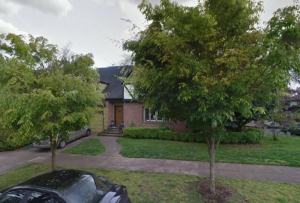 The official registered headquarters of the Chamber’s expert on Colorado economic issues, is this 4 bedroom, 3 bathroom house in Portland, Oregon

Fruits specializes in “litigation support” for businesses, meaning he hires himself out to say whatever his paymasters need him to say, much like independent scientists did for the tobacco industry in the 1970s-1990s.

Fruits is an anti-Keynesian economist who produces research papers for pay for lobbying groups like homebuilder and realtor associations and energy companies. The papers tend to lack disclosure statements saying who funded their creation. Legitimate, peer-reviewed academic journals typically require authors to sign disclosures saying whether they have accepted funding for their reports or studies, and if so, from whom. These disclosure statements are then published along with the articles. No such disclosures appear on Fruit’s publicly-available research articles, and many of them are self-published reports and analyses done for pay.

Fruits also works as an adjunct professor of economics at Portland State University. Adjunct professors are not full-time, tenured professors. They are typically low-paid contract workers that schools hire on a part-time basis, to have an opportunity to try them out. In the U.S., adjunct professors often earn less than pet-sitters.

By contrast, the U. S. Department of Labor, which could actually be considered a credible source on workplace economic issues, devotes an entire page of its website to busting myths often disseminated about the minimum wage, exactly like those cited by Fruits. Here are some examples:

Myth: Increasing the minimum wage is bad for businesses.

Not true: Academic research has shown that higher wages sharply reduce employee turnover which can reduce employment and training costs.

Myth: Increasing the minimum wage is bad for the economy.

Myth: Increasing the minimum wage will cause people to lose their jobs.

Not true: In a letter to President Obama and congressional leaders urging a minimum wage increase, more than 600 economists, including 7 Nobel Prize winners wrote, “In recent years there have been important developments in the academic literature on the effect of increases in the minimum wage on employment, with the weight of evidence now showing that increases in the minimum wage have had little or no negative effect on the employment of minimum-wage workers, even during times of weakness in the labor market. Research suggests that a minimum-wage increase could have a small stimulative effect on the economy as low-wage workers spend their additional earnings, raising demand and job growth, and providing some help on the jobs front.”

Aside from the overall problem of basing important policy decisions on information from questionable and even sketchy sources, the Chamber’s stand against increasing the minimum wage is decidedly anti-worker.

The Chamber claims to support local business, even while repeatedly taking its own business out of town, for example by hiring an out-of-state web developer to create its website, hiring lawyers from the front range to make legal threats, holding its annual meetings at out-of-state resorts and seeking policy opinions from an economist in Portland, Oregon rather than local economist, or even an economist from Colorado. Even given its longstanding track record of failing to support local people in general, it is hard to grasp the inhumanity of the Chamber’s tight-fisted opposition to the best interests of local workers, since businesses depend on workers to keep running. Workers satisfaction and well-being are key to operating stable, productive, efficient businesses. If workers are struggling with low wages that barely allow them to keep a roof over their families’ heads and food on the table, businesses will suffer, too, with problems like permanently high employee turnover, lack of employee loyalty, low productivity and the high cost of constantly having to hire and train new workers.

The sad fact is that what we have been doing for so long — that is, going along with the Chamber’s push to maintain a low wage scale compared to the rest of the state — just isn’t working. Even though many people are working hard at multiple jobs, thousands of workers in our area live at poverty level and are barely scraping by on what they make. As a result, workers are dissatisfied, prospects for making a decent living in Mesa County are remarkably poor, making it an unattractive place to relocate to, and large numbers of kids here are going hungry because of the poverty wages many employers in this area pay.

This is not a picture of success. It’s the opposite.

In a town where hard working families have to rely on the extra support provided by food stamp programs, food banks, Medicaid, soup kitchens and charities to get by, the Grand Junction Area Chamber of Commerce sadly, reflexively and consistently opposes anything that would benefit the struggling workers of Mesa County and their families.