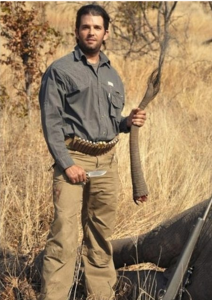 Donald Trump Jr. poses with an elephant he killed. He holds the hacked-off tail of the elephant in his left hand. 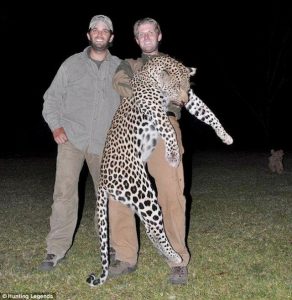 Donald Trump’s sons pose with a leopard they killed on a trophy hunt.

Tomorrow evening at 6 p.m. Donald Trump Jr. will appear in Grand Junction at the Mesa County Fairgrounds, nominally to talk to sportsmen.

Donald Jr. likes to kill rare and endangered animals in expensive trophy hunts overseas. He is supposed to be speaking about “wildlife conservation.”

Anyone who can stand to be in the presence of a human being like this, or who can manage to do it without losing their stomach, is invited to attend.

4 comments for “Donald Trump Jr. to Appear in Grand Junction”