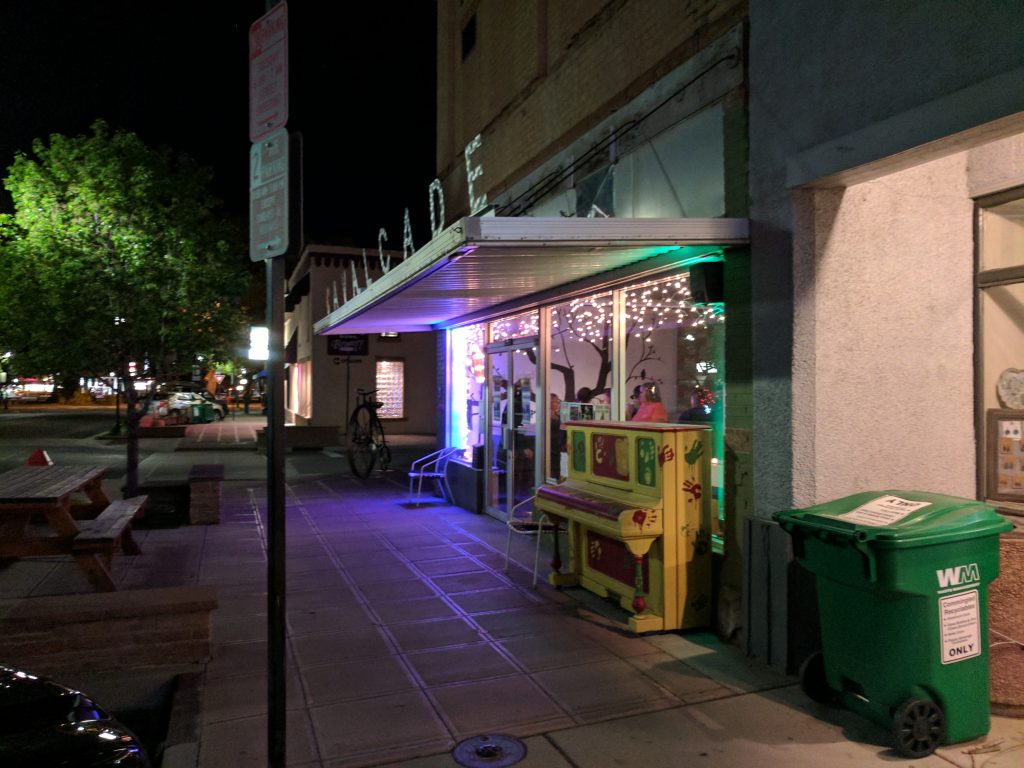 Cavalcade at 201 E. Aspen in Fruita

It’s no secret that there are a few ways in which Fruita has been blowing the doors off Grand Junction lately. Their property values are increasing faster than those in G.J., they’ve got a fantastic rec center, they’ve attracted a young, fun, creative crowd by emphasizing outdoor activities and now there’s another little surprise that makes the place even more special.

Cavalcade is a renovated store front on Fruita’s main drag that’s been set up to be a small theater, with an audience-level stage, sound system, a screen and projector. I made it there Saturday night in time to catch the last half of their monthly Variety Show. The entire show is about three hours long, costs $10 and starts at 7:00 p.m. I made it there at 8:30 p.m., right at the intermission, and they let me catch the second half of the show for half price.

By the time it was over, I was really happy I made the drive out there.

The acts consisted of music, comedy, and a short film. Several small local bands played instantly-likable music with easily-accessible harmonies and toe-tapping beats, at a comfortable volume that wasn’t too loud. The first band had five pieces, including two female vocalists who sang a haunting, instantly-engaging song called “Memories are Now” by Jessica Hoop that I’d never heard before. Frankly, their rendition was excellent and really knocked my socks off. After that, they showed a short film by local Cullen Purser that juxtaposed historical imagery of newspaper presses with a 1961 speech by President John F. Kennedy about the importance of the press to a free society. About ten minutes long, President Kennedy delivered a chillingly pertinent message, with a bit of wry humor that made it extremely poignant. Everyone should hear that speech. I was glad Cullen Purser brought it to attention once again in his creative way at Cavalcade Saturday night, because I was only about 5 years old when President Kennedy originally gave it. The next artist was a guitarist and vocal performer with a Latin vibe reminiscent of Carlos Santana. There were a few jokes in between acts. It definitely a lot more fun than sitting home watching Star Trek re-runs.

Cavalcade overall offers a variety of home-grown entertainment, including music, philosophical conversation, short original films, story-telling, stand up comedy and more. They have open mic night on Thursday evenings that helps them recruit people to perform at their variety shows. 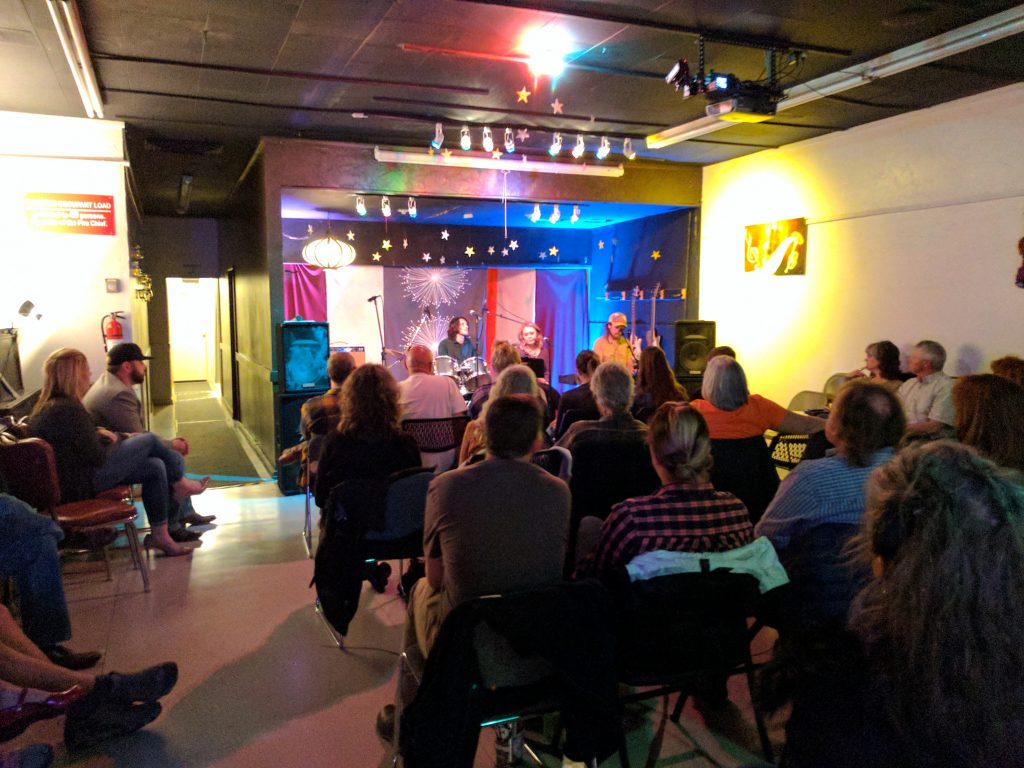 Inside Cavalcade during one of their monthly Variety Shows.

Cavalcade is rated by the Fruita Fire Department to hold 49 people. There are six rows of five chairs each set up in the center of the place with seats also set up around the edges. As might be expected in such an intimate venue, the performers interact with the audience in an easy, friendly way. Cavalcade reminds me of the legendary Bla Bla Cafe in Studio City, California, a tiny little performance venue from the 1970s to 1982 that had a black curtain across the door, was open until 4:00 a.m. and gave rise to performers like Al Jarreau, David Letterman, Jay Leno, The Police, and Huey Lewis and the News. But Cavalcade isn’t a late-night spot. The show concluded about about 9:20 p.m.,

You never know what local talent you’ll see at Cavalcade, and which of them might go on to become world famous, but go see them now before they get too famous to be in Fruita.

Cavalcade has been around since 2011, thanks to the dedication of a small crew of Fruita residents who are passionate about keeping it open and offering this unique feature to residents in this part of the valley. It operates with an all-volunteer crew and barely scrapes by on a budget of about $18,000 a year, which barely covers their costs. They deserve support from the entire valley for providing this wonderful, well-equipped little performance theater and for showcasing the talent and creativity we have here in the Grand Valley.

Do yourself a favor. Check their calendar and go catch a performance there. You might be pleasantly surprised.