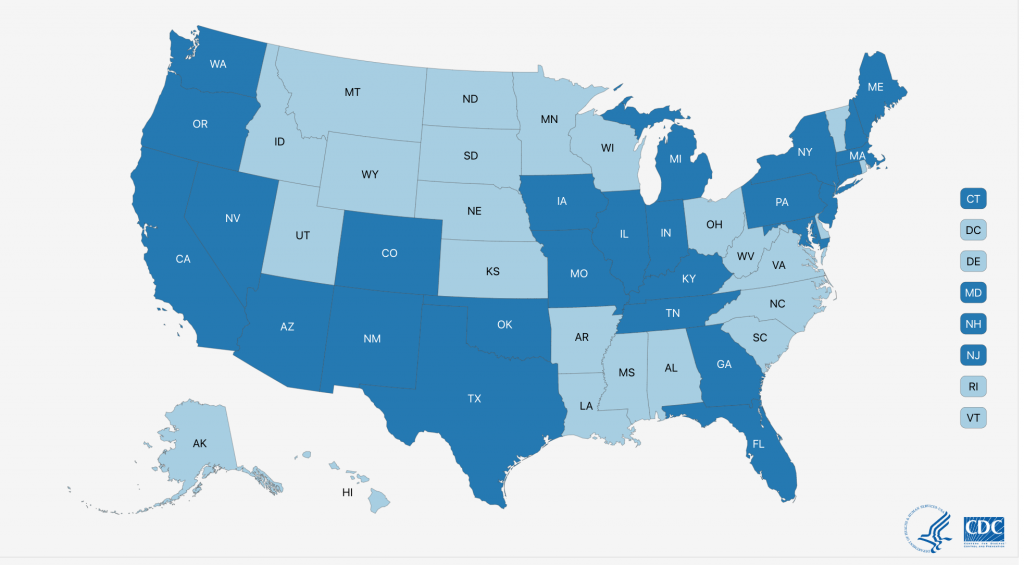 States where measles outbreaks have occurred in the U.S. as of May 24, 2019

According to the Mesa County Health Department, there have been no cases of measles reported so far in Grand Junction, and only one case in Denver  in January, 2019. But don’t let that make you complacent. People travel widely to and from stricken areas, and could bring the epidemic to Colorado large scale at any time. Measles is an extremely contagious viral disease. When a person with measles leaves a room, people who enter that room afterwards can catch the disease for up to two hours after the infected person has left.

The best option is to be prepared, and the only preparation is immunization, unless you have already actually had the measles, as is the case with many older people who were children before a measles vaccine was invented in the early 1960s. In that case, you should already be immune.

Measles starts with a fever usually greater than 100 degrees F, and is followed by fatigue, cough, runny nose, and red, watery eyes. The rash is typically red and bumpy with flat spots, and begins on the face along the hairline and behind the ears. Over the next 3 days, the rash spreads over the entire body and is usually gone after 6 days. The incubation time from exposure to rash onset ranges from 7 to 21 days. Complications of measles include pneumonia, seizures, inflammation of the brain (encephalitis) and, rarely, death.

There is no treatment for measles, only prevention.

How to protect yourself:

Who needs a vaccine?

Everyone who hasn’t had one, and who has never had the measles. And if you had a measles vaccine a long time ago when you were a kid, you’ll need a booster.

The MMR vaccine (which stands for measles, mumps, rubella — also known as German Measles) is very safe and effective. Two doses of MMR vaccine are about 97% effective at preventing measles; one dose is about 93% effective.

According to Colorado Department of Public Health, two doses of the vaccine are needed for optimal protection, so if you had a measles vaccination (MMR) once when you were little, another vaccine is in order to assure you are protected against the disease. Vaccinations are typically covered by insurance and are available at your doctor’s office, county health departments and at local pharmacies. The Mesa County Health Department can immunize you against measles. The charge will be adjusted on a sliding scale based on your health insurance and your income. The County Health Department will not turn anyone away, though, if you don’t have insurance or can’t afford the vaccine. It is most important to vaccinate people who have never had the vaccine before, since they are the ones who usually get the disease and spread it to others.

I called Walgreens to see if the vaccine is available there. It is available on a walk-in basis, but must be administered by their on-duty licensed pharmacist, so you might have to wait 30-45 minutes if the pharmacist is busy. The out of pocket cost of the vaccine at Walgreens is $100 if you pay cash.

3 comments for “The U.S. has a measles epidemic, but is it in Grand Junction?”