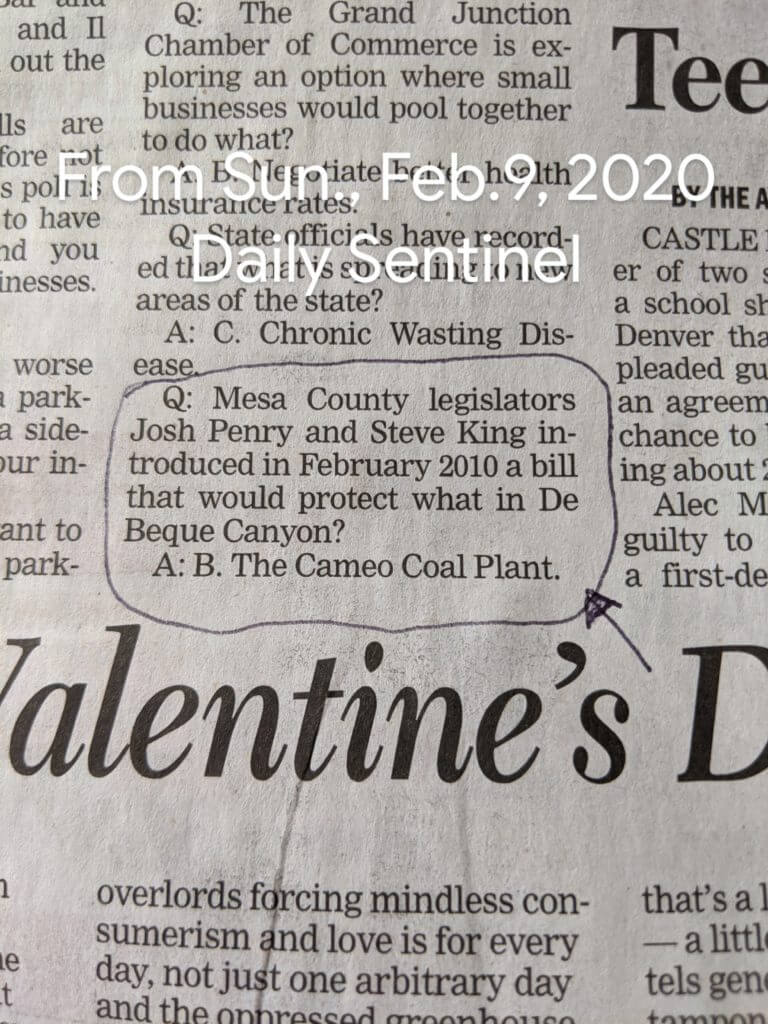 Should we really have saved the Cameo Power Plant?

XCel Energy closed the coal-fired Cameo Power Plant in DeBeque Canyon in 2011 because it was inefficient, at a time when the state was starting to phase out high-polluting coal-fired power plants anyway. The Cameo plant was built in 1957 with uranium material incorporated into its construction. When it closed, the land surrounding it was also contaminated with coal ash. Environmental laws instituted by forward-thinking, left-leaning legislators years ago, required that the uranium and coal ash be cleaned up, a job that was completed by 2014.

Now there’s a shooting range and a 4-megawatt solar installation on the reclaimed land — a much better use for the land.

Had the foolish Republicans Penry and King prevailed in passing their legislation to “protect” the old Cameo power plant, we would have been stuck with an inefficient, outdated wreck of a power plant sitting on contaminated, unusable land.

*What happened to Republicans King and Penry?

In 2013, Steve King was arrested and charged with three felonies for committing fraud and embezzling from the Mesa County Sheriff’s Department and Colorado Mesa University. He pled guilty to the charges. Josh Penry went on to start EIS Solutions, a Republican astroturfing company that was busted for faking signatures on a pro-fracking petition in Fort Collins in 2013, the same year Steve King was arrested.

Conservative right-wing Republicans are averse to change. They believe the answers to our problems lie in returning to the past.

That isn’t just my opinion. It’s the definition of a right wing conservative:

Conservatives refuse to envision the future, and have little or no inclination to consider it or prepare for it. They think existing jobs are the only jobs that will ever exist, and so they believe that economic survival depends on perpetuating the use of old technologies.

But society and technology never move backwards. Just ask anyone who owns a refrigerator if they’d rather go back to using an ice box so all the ice men can get their jobs back. The idea is laughable. Examples of this are everywhere. Efficiency and convenience always win out. That’s progress.

But Republicans perpetually resist progress and beneficial technological change. To do this they inevitably dig up ways to portray progress as bad.

Republicans working to hold back progress in science and technology is nothing new.

Take a look at this excerpt from the Congressional Record of 1940. In 1936, FDR’s administration passed the Rural Electrification Act to bring electricity to rural areas and farms across the country. At the time, many Republicans detested the idea of public power. In this excerpt, a proponent of rural electrification is speaking before Congress:

An excerpt taken from the Congressional Record from the spring of 1940 shows Republicans fought rural electrification because they believed technological advancements like radios, electric refrigerators and sewing machines were too extravagant for farmers.

Republican State Senator Ray Scott works hard to tank efforts to advance electric vehicles, portraying the technology as a “war on coal.” Republican County Commissioner Rose Pugliese actively opposes teaching climate change in public schools.  The right-wing Grand Junction Area Chamber of Commerce keeps on cheerleading for doomed, embattled industries like methane drilling and oil shale mining. The Grand Junction City Council keeps avoiding approving the sale of recreational marijuana, approved by the state in 2012, while towns all around us who have approved it are seeing their economies boom and their cities benefitting. 2020 county commissioner candidate Janet Rowland, another old guard Republican conservative “retread” who has already held the same office twice before, opposes allowing LGBTQ+ people to marry in an era when the Supreme Court has already approved marriage equality for all Americans.

Because Mesa County voters keep electing and re-electing conservative leaders, our area keeps spinning its wheels and is deterred from moving into the future.

It’s time to give forward-thinking people a chance to hold office in Mesa County instead of electing conservative retread candidates like Ray Scott and Janet Rowland.

*Further information about why Republicans are bad for the country: a tendency to skirt rules, laws and norms.