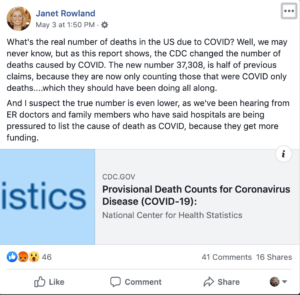 Most recently Rowland has been promoting the theory that the U.S. Centers for Disease Control (CDC) is intentionally inflating the number of Covid-19 deaths and infection rates, and that the death count is actually far lower than the government claims. One reason she givs for this is that it allows hospitals to make more money. In truth, anyone who has ever worked in a hospital knows that hospitals get paid for TREATING Covid patients, not for listing a certain cause of death on the death certificate. Claims that hospitals are deliberately miscoding patients as having Covid-19 are not supported by any evidence.

CDC also does not issue death certificates. Rather, the CDC relies on information provided to it by hospitals and coroners across the country. CDC’s guidelines for certifying deaths from Corona virus say that if Covid played any role in the death, it should be listed on the death certificate, even if it is an underlying cause of death, and not the primary cause.

Also, if anything, the number of Covid deaths is being undercounted, as bodies are stacking up faster than they can be processed in places hard-hit by the virus, like New York and New Jersey.

Where does Rowland get her information?

Rowland’s Covid-death inflation theory is being promoted by Laura Ingraham of Fox News — one of Rowland’s most frequently-cited news sources. For those who don’t know, Ingraham was forced off Fox News for a time after she used her TV platform to publicly denigrate teenager David Hogg, who survived the Marjorie Stoneman Douglas High School gun massacre, for his failure to be accepted by several universities to which he had applied, despite having a 4.1 GPA. 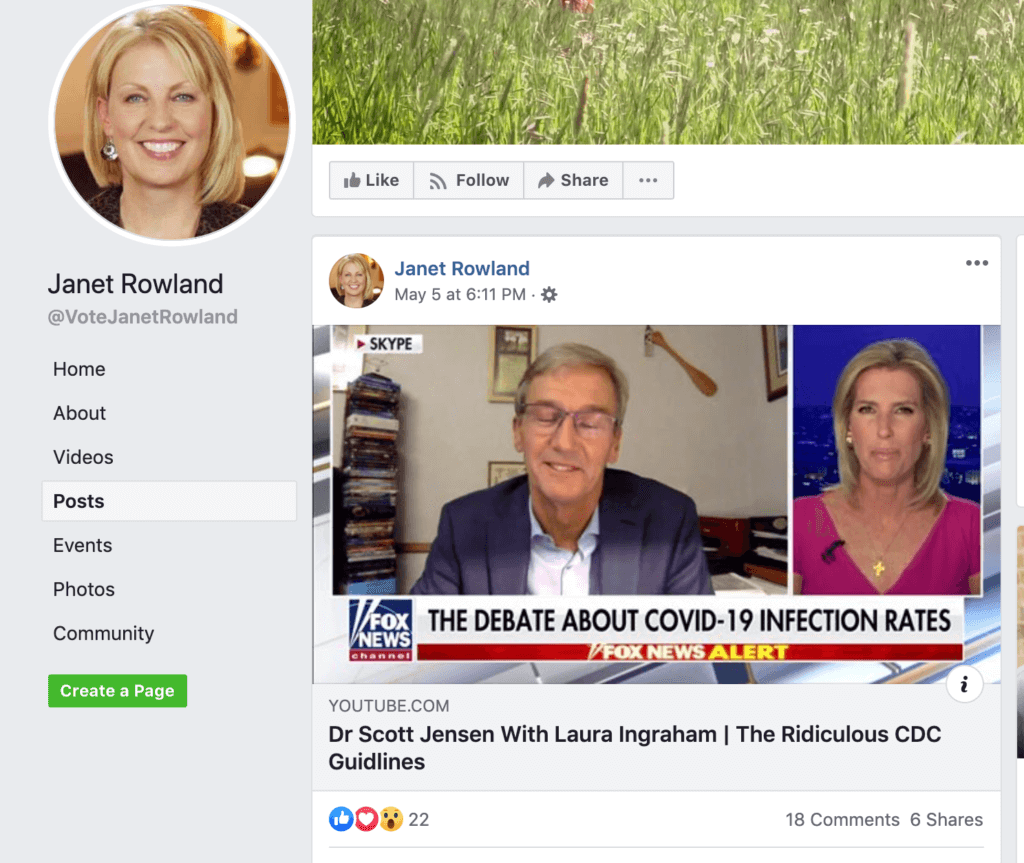 The Covid-death over-count theory also being promoted far-right conspiracy theorist David Icke, known for making claims (video) that George Bush, Hillary Clinton, Barack Obama, Queen Elizabeth and other modern-day world leaders are part of the Lizard Illuminati, a centuries-old reptilian-Satanist pedophile group, and that the moon is actually a hollowed-out space station that the Illuminati use as a base to control our minds.

The death overcount theory is also being promoted by far-right wing conspiracy theorists QAnon and Alex Jones, on Jones’ Infowars website. Jones says the government is inflating Covid deaths to terrorize people into relinquishing their freedoms and to benefit the vaccine industry.

Like Icke, Jones is well known as one of the most vile and least credible sources of information in the entire country.

Jones was sued for defamation by the parents of children killed in the Sandy Hook gun massacre in Newtown, CT in December of 2012. Twenty elementary school children and 6 teachers were killed in the massacre.

Jones claimed the massacre never happened and that it was a hoax. He told his followers it was staged by nefarious groups and that the grieving parents were just actors.

A court ordered Jones to pay $100,000 to the families of the dead children who had been subjected to harassment and death threats as a result of Jones’ hoax claim.

Why does Rowland use her candidate platform to promote wacky far right-wing theories?

Absent true malicious intent, the only possible answer is that she just doesn’t know any better.

By mindlessly promoting these theories she is exhibiting a dangerous lack of media literacy and a near total absence of critical thinking skills at a time when these skills are crucial. Rowland is showing us outright that she lacks the intellectual curiosity to research the origins of such theories and determine their validity. She is demonstrating in real time that she is unable to tell credible information from nonsense — a fatal flaw for anyone running for elected office.

What’s more, by doing this she is misleading her social media followers on a daily basis, which is unethical.

Rowland, who previously was a Mesa County commissioner for two terms, from 2005-2013, has proven herself to be ethically challenged in the past, and showed at that time that she does not care where her information comes from. She has a documented track record of intentionally misleading people and not taking responsibility or caring at all that she’s doing it.

This is not the type of person who should be elected to any office in Mesa County, or any office anywhere in the country.