Here is the relevant part of that interview:

Vantersteel: Do you know about the Q Movement? Are you familiar with what that is?

Boebert:. I AM familiar with that. That is more my mom’s thing. She’s a little fringe. I try to … I just try to keep things on track and positive. I’m very familiar with it, though.
Vandersteel: Do you think Q is a bad thing? Or is it just sort of…I mean, what is your opinion?
Boebert: Honestly, everything I’ve heard of Q, I hope that this is real, because it only means America is getting stronger and better, and people are returning to conservative values, and that is what I am for, uh, and so  everything I have heard of this movement is only motivating and encouraging and bringing people together, stronger, and if this is real, then it could be really great for our country.

So what is the “Q movement”?

“Q” is short for QAnon, a far-right conspiracy theory, information about which was originally only accessed through sites on the dark web, like 4Chan and 8Chan, the latter of which serves as a free-speech forum for racism, white supremacism, nazism, anti-semitism, and child pornography.

Among other things, QAnon posits that a “deep state” plot exists against President Trump, spearheaded by liberal Hollywood movie stars, prominent Democrats and national and international figures (“elites”) who belong to a secret, evil global cabal of Satan-worshipping pedophiles. Many followers believe “Q” is an anonymous government agent within the Trump Administration who has a high security clearance. “Q” posts vague, generalized hints about the supposed ongoing battle between Trump and the evil pedophilic cabal on social media accounts. Followers call these hints “breadcrumbs.” QAnon followers believe Trump is a savior, not just of America, but of all of mankind, and believe he will do battle on their behalf against the evil liberal pedophiles and destroy the Satan-worshipping cabal.

The “Q movement” was borne from “birtherism,” the theory that Trump pushed that Barack Obama was not born in the U.S.

It’s hard to describe just how vast, insane and widespread QAnon’s conspiracy theories are. NBC and The Daily Beast have published detailed descriptions of “QAnon,” how the conspiracy theory made its way into the mainstream media and even how its followers have now made it as far as running for seats in the U.S. Congress. The NBC article even proposes that soon in the not-too-distant future, there will even be a “QAnon caucus” in Congress.

Some theories promoted by QAnon

QAnon advances the theory that mass shootings in America are “false flag” operations that are organized and carried out by the aforementioned secret pedophilia cabal.

QAnon was responsible for spreading an influential YouTube video chock full of lies and misinformation called “Plandemic,” that blamed the Corona virus pandemic on Big Pharma, Bill Gates and the World Health Organization. YouTube eventually took the video down for “containing medically unsubstantiated diagnostic advice,” like a statement that wearing a mask can make you sick, and for spreading false claims like that billionaires are helping spread the coronavirus as a way to sell more vaccines. Facebook removed the “Plandemic” video as well, but not before it had gotten 1.8 million views and 150,000 shares.

The “Pizzagate” shooting in Washington, D.C. in 2016 is an example of the dangerous, real-world consequences of true-believer QAnon followers.

In line with a Q-Anon conspiracy theory, a 28-year old father and QAnon adherent believed that hacked emails from Hillary Clinton and John Podesta contained coded messages that indicated they were operating a child sex-slave ring out of the basement of a pizzeria in Washington, D.C. He gathered his firearms and drove 350 miles from Salisbury, North Carolina, to the D.C. pizzeria “to investigate” the pedophile ring. Once there, he fired an AR-15 rifle into the restaurant. Fortunately, no one was killed. When police arrested him, the shooter explained that he was there to rescue the children. 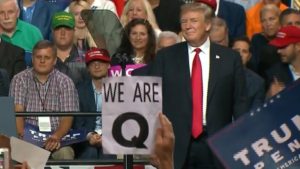 QAnon followers believe Trump is their savior in an epic battle against an evil global Democratic pedophile ring, and more

A 15-page FBI intelligence bulletin (pdf) published by the FBI’s Phoenix office on May 30, 2019 links the followers of fringe political conspiracies including QAnon directly to domestic terrorism.

“On 15 June 2018, a Nevada man used an armored truck to block traffic on the Hoover Dam Bypass Bridge, held up signs conveying a political demand, then fled into Arizona where he was arrested by Arizona Department of Public Safety, who found body armor, rifles, ammunition, and a flash-bang device inside his vehicle, according to law enforcement information. According to a technical source with direct access, the man referenced the QAnon conspiracy theory directly and discussed related conspiratorial beliefs after his arrest. According to an online news source deemed reliable, he sent letters from jail containing a distinctive QAnon slogan to President Trump and other officials claiming he wanted to expose government corruption and lies.”

On 29 May 2018, the leader of an unofficial, local veterans aid group claimed to have discovered a child sex trafficking camp on privately owned land in Tucson, Arizona, according to two news sources of unknown reliability…. After local law enforcement investigations discredited the claim, the leader repeatedly alleged a law enforcement cover-up and referenced the QAnon conspiracy theory as he and armed group members searched for additional camps, according to multiple sources with varying degrees of access. …In addition, the leader and his supporters accused specific residents, businesses, and local officials of aiding or participating in child sex trafficking, according to two sources with indirect access. …The group also harassed, threatened, and doxed critics and opponents, according to multiple sources with varying degrees of access …and engaged in criminal activities, according to an indictment filed in an Arizona county superior court.”

Some QAnon believers are so extreme that they appear to be a more like quasi-religious cult that links QAnon conspiracies to a larger epic battle of good vs. evil that ultimately seeks to “Take the Kingdom of Christ by Force.”

By publicly approving of QAnon, Boebert indicates she’s incredibly stupid, or supports insane conspiracy theories that lead to domestic terrorism, or both

There really aren’t more words to describe how loony Lauren Boebert is for the way she has openly aligned herself with the QAnon movement as she did on the “Steel Truth” show. But at least she’s put that information out in the open so voters who are anchored in the real world can evaluate just how badly we need to make sure in November that Boebert stays working full time in her kooky restaurant in Rifle.

4 comments for “Why the Republican candidate for 3rd Congressional District, Lauren Boebert, is batsh*t crazy”