Rowland is actively discouraging masking on her candidate Facebook page

Rowland denies the accepted scientific evidence that masking slows the spread of Coronavirus, infers that wearing masks may have negative consequences, and as her sources links to YouTube videos and non-authoritative websites that hawk disinformation: 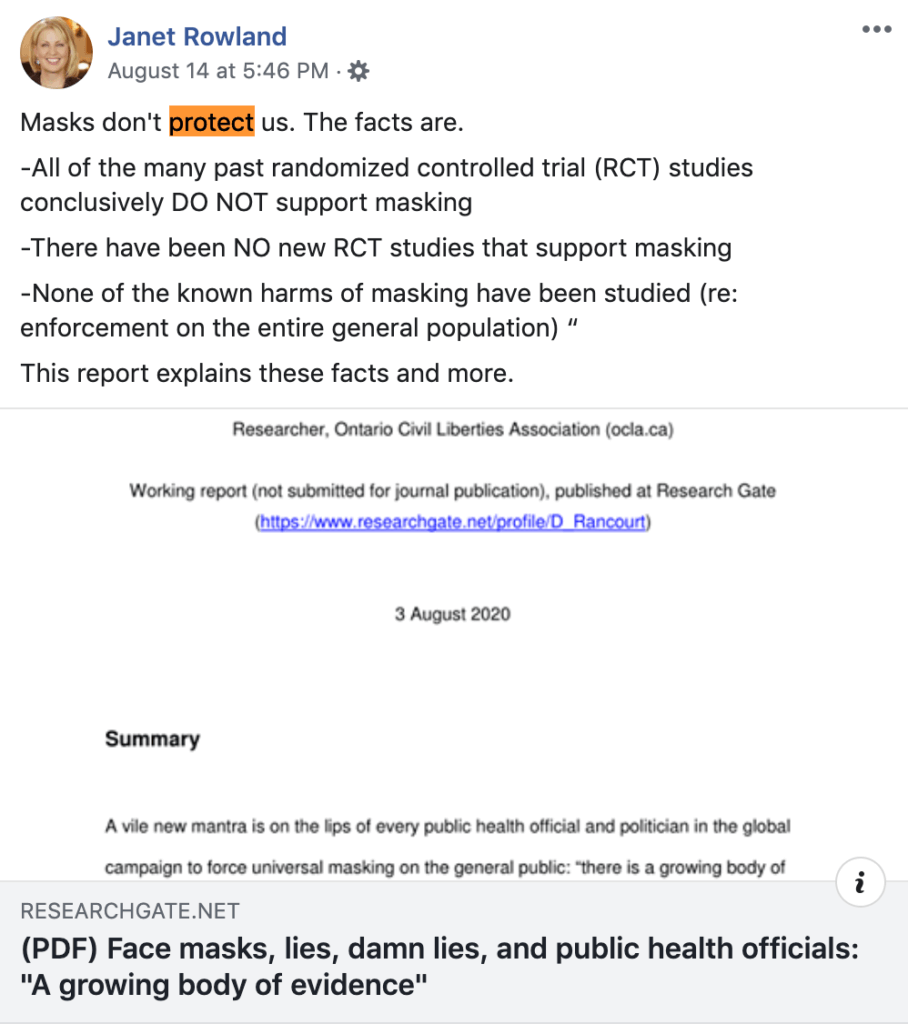 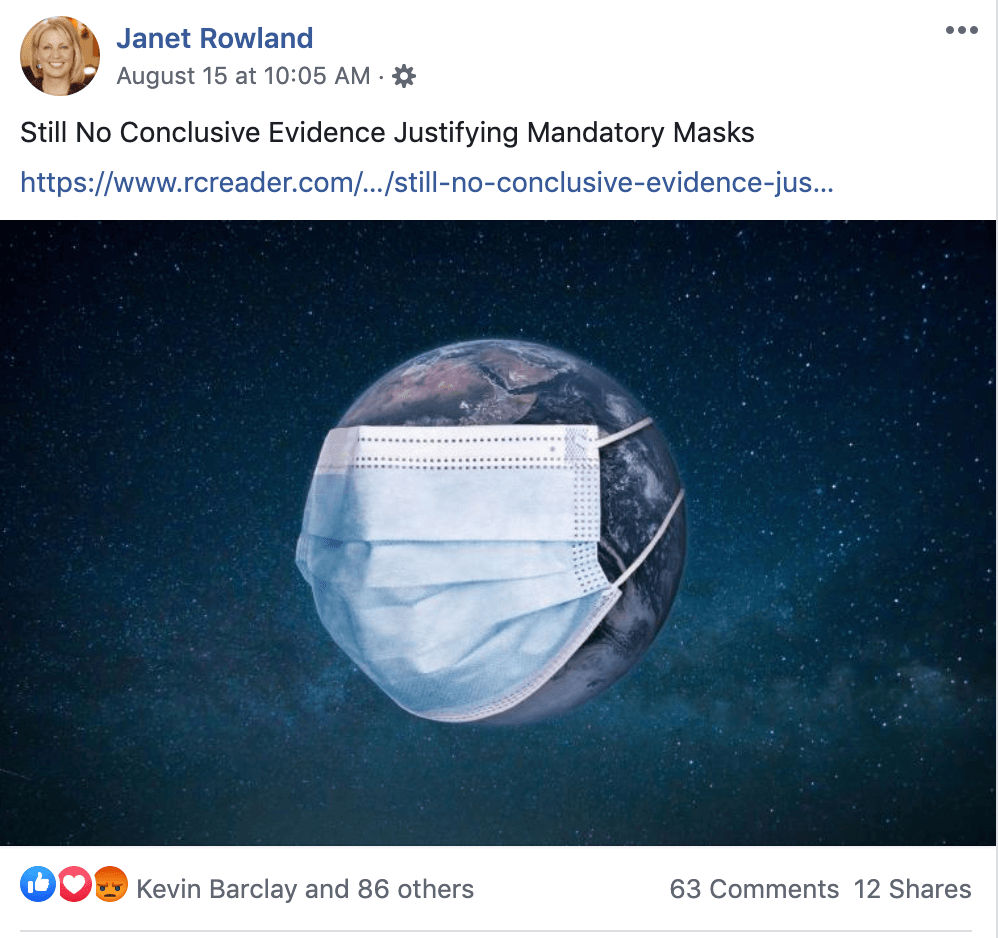 “RCReader.com” is the website of the River City Reader, a monthly tabloid newspaper published in Moline, Illinois, a city of about 43,000 people located about 5 miles from Davenport, Iowa. It is not a peer-reviewed journal. 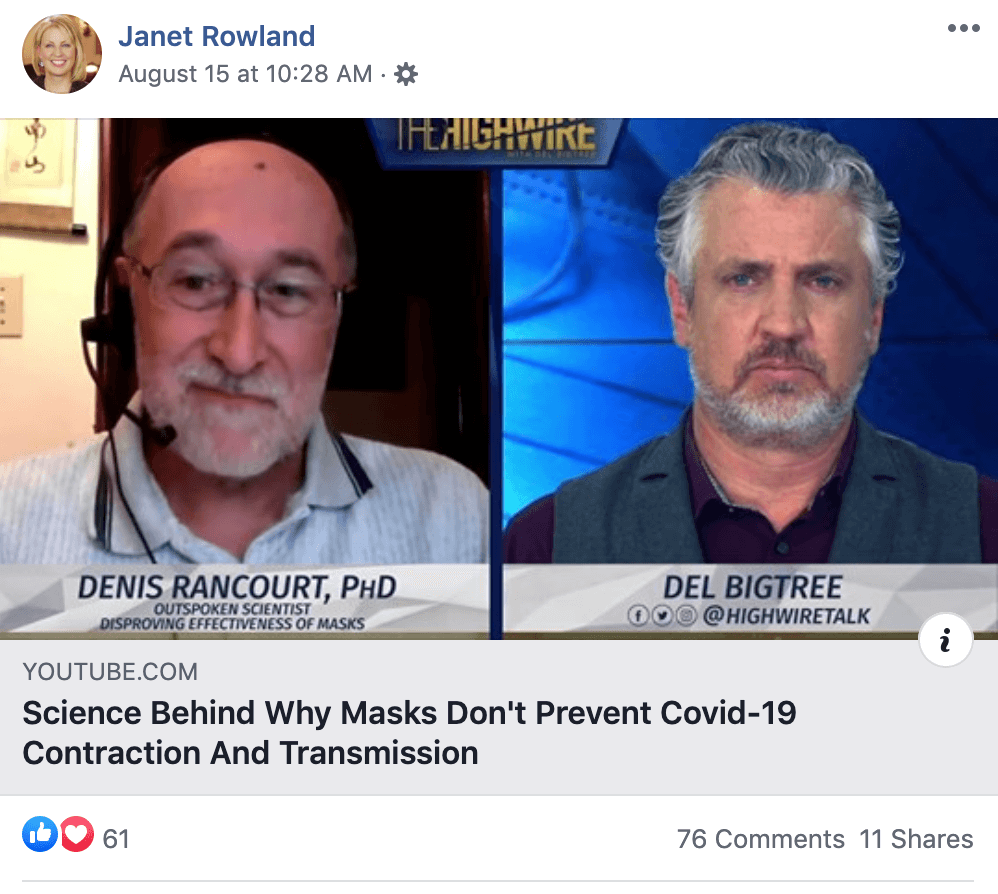 Denis Rancourt, Ph.D. was a professor of physics and environmental science — not epidemiology, virology, biology or other health care-related field — at the University of Ottowa until he was removed from teaching duties and banned from campus over issues related to grade inflation and “academic squatting.” He was formally fired in March of 2009.

On August 17 Rowland posted graphs showing numbers of Covid deaths that she claims to have obtained from the Mesa County Health Department, but posted them devoid of any context and missing key explanatory information, lulling her followers into thinking Covid-19 deaths are overblown compared to the regular flu.

Casting doubt on the death toll from Covid-19 is another conspiracy tactic spread by far-right Q-Anon supporters.

A sharp reader of Rowland’s page gave a detailed explanation about why her post was so misleading, and why it constitutes dangerous behavior from someone who is seeking a position of trust in our community: 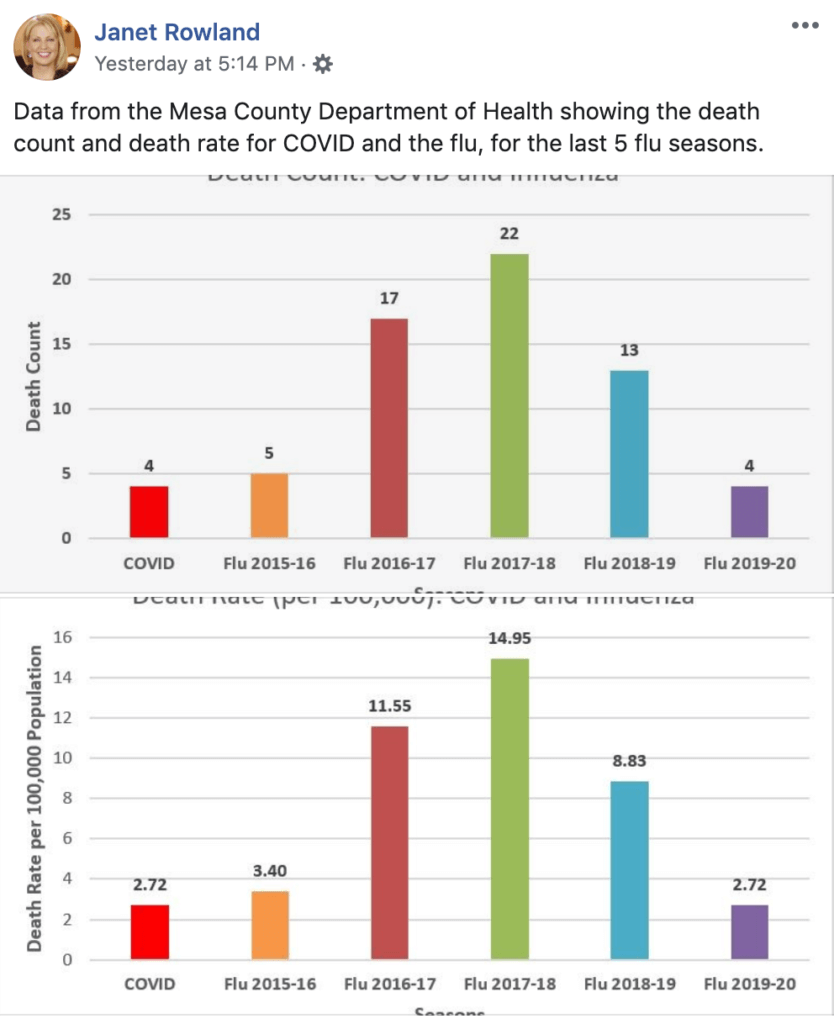 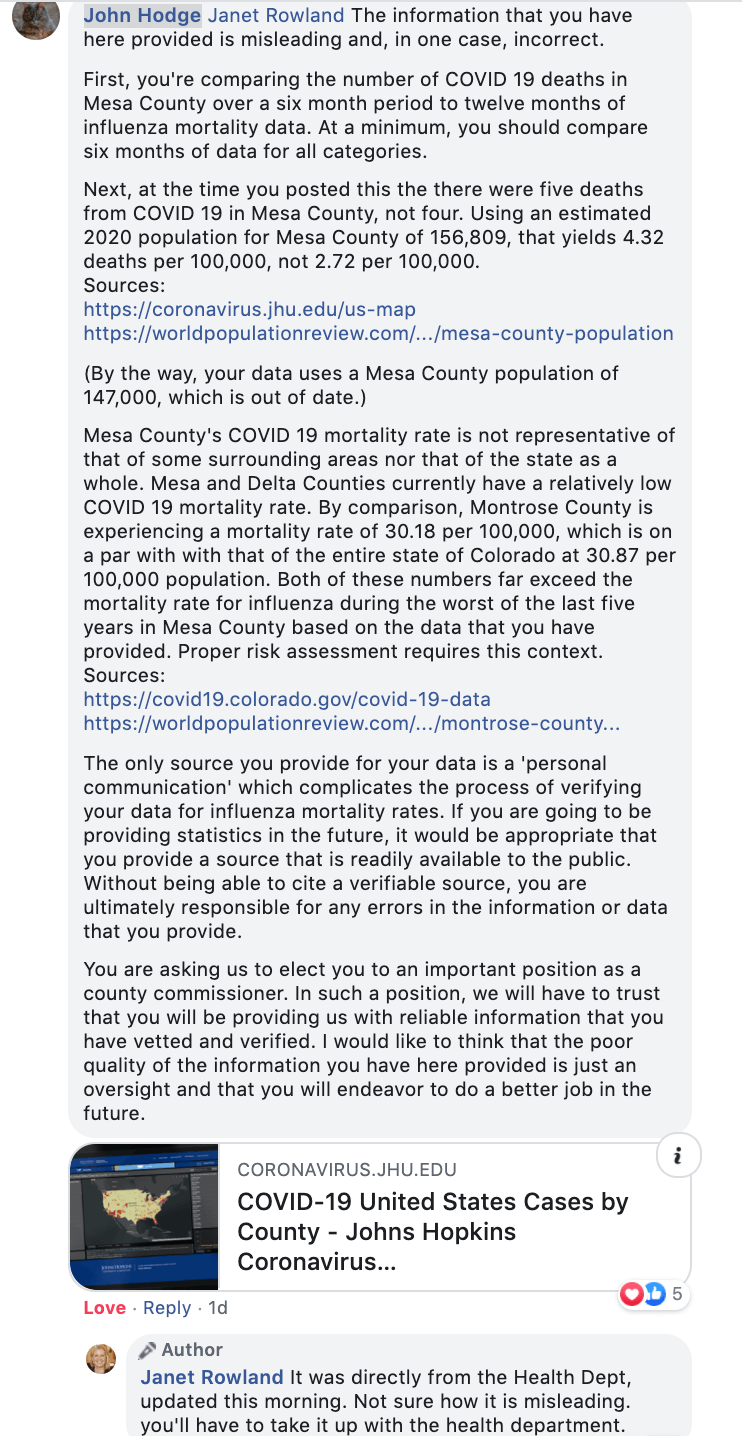 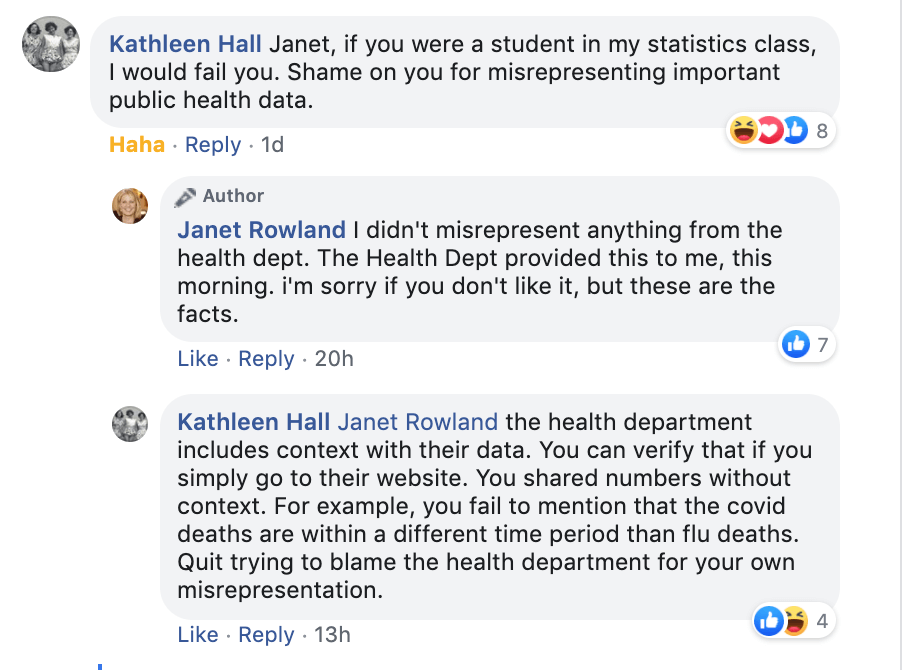 Rowland fails to take any responsibility for representing important public health data in a way that misleads the public.

Don’t forget Rowland’s plagiarism. And by the way, plagiarism is lying.

This isn’t the first time Rowland has intentionally misled people and shirked responsibility for it. Her tendency toward this is documented in local history.

In February of 2007, during her first term as Mesa County Commissioner, Rowland was found to have copied columns she “wrote” for the Grand Junction Free Press, word for word from government pamphlets:

Janet Rowland committed plagiarism during her first term as commissioner 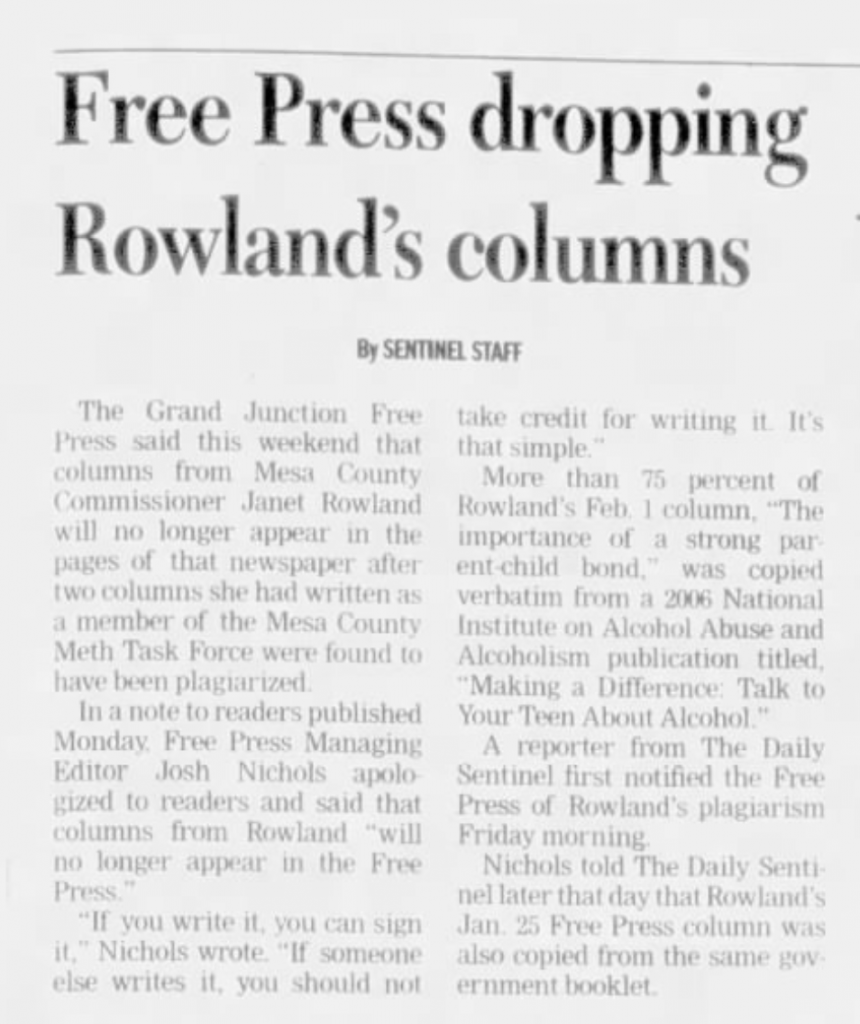 The Free Press fired her for it.

Plagiarism is stealing someone else’s work and passing it off as your own.

It’s an ethical lapse that is anathema in academic world, not just because it’s lying, but it devalues the efforts of everyone else in academia who produces  work honestly.

And the academic world is Tim Foster’s world.

Foster should be the last person to endorse a candidate who militates against established science, promotes fringy conspiracy theories and is a documented plagiarist to boot.

If he is now thinking twice about endorsing Janet Rowland, great. He should. (That may be the case, too, as it appears Foster’s endorsement of Rowland as seen at the top of this article has been removed from Rowland’s Facebook page.)

But Foster needs to go further.

Foster’s endorsement of Rowland has already misled plenty of people into thinking Rowland has his full support, that she’s a fine, ethical candidate who deserves to hold office again when in reality Rowland is a conspiracy nut who steals other people’s work, intentionally misleads people and who would pose a clear public health threat amid the pandemic if she gets into office.

Foster needs to undo the damage he’s done, and undo it quickly, by publicly denouncing Rowland and explaining to the community how her fringe, anti-science views, lack of ethics and failure to be accountable for what she says and does are dangerous not just to CMU, but to our entire community.