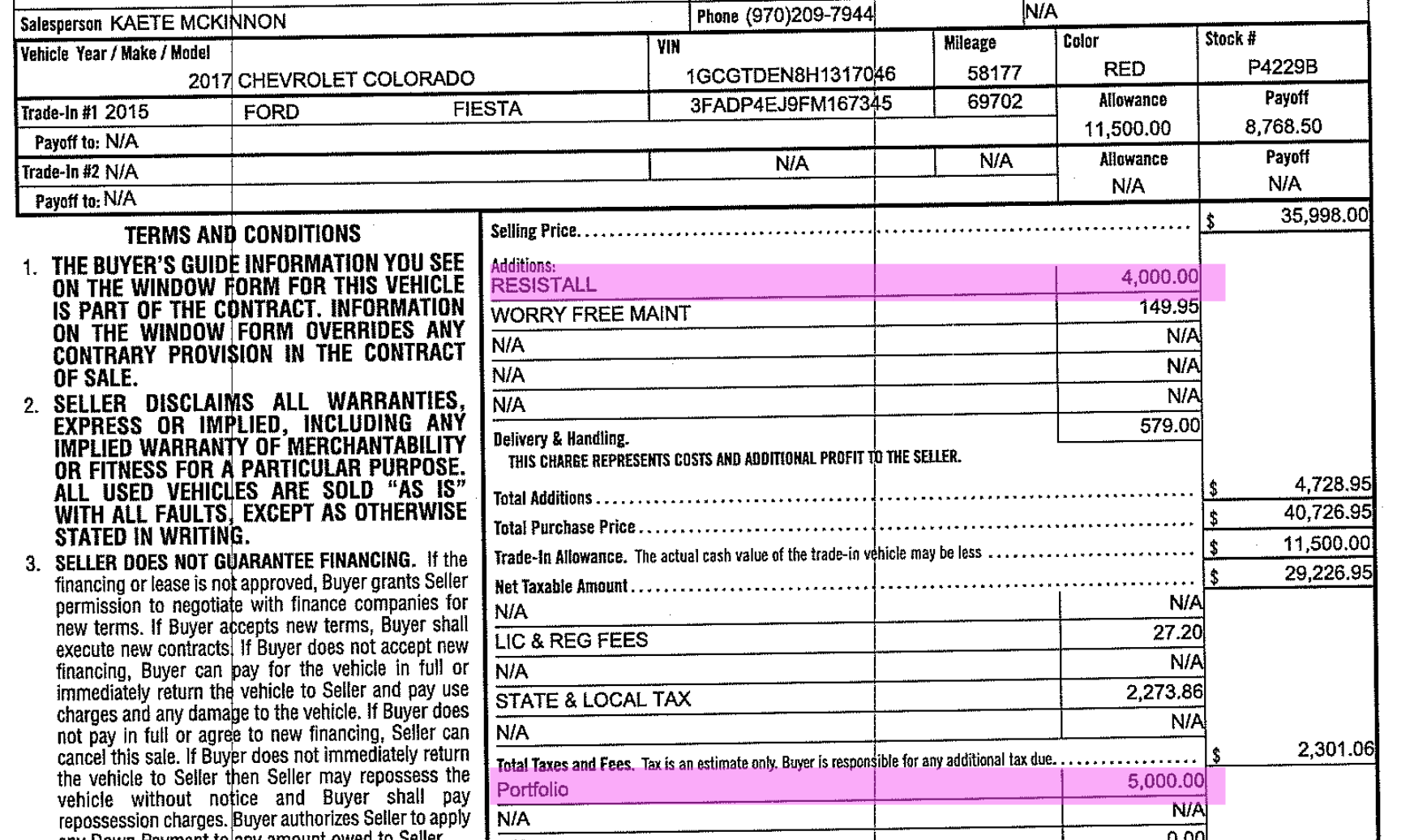 The $9,000 in extra charges Red Rock Hyundai included on a 21 year old customer’s contract without his knowledge or approval. After this deception was exposed and the customer confronted the dealership, they removed these charges and gave the customer a satisfactory new deal on an entirely different vehicle. See the bottom of this article for who to contact to get satisfaction if you’ve been ripped off by a Red Rock dealership.

The 21 year old customer of Red Rock Hyundai featured in a December 29 blog about the horrendous way the dealership treated him during his purchase of a used mid-sized truck reports that after almost two months of dealing with the situation, he has finally gotten full satisfaction from the dealership.

It wasn’t without a fight, though. 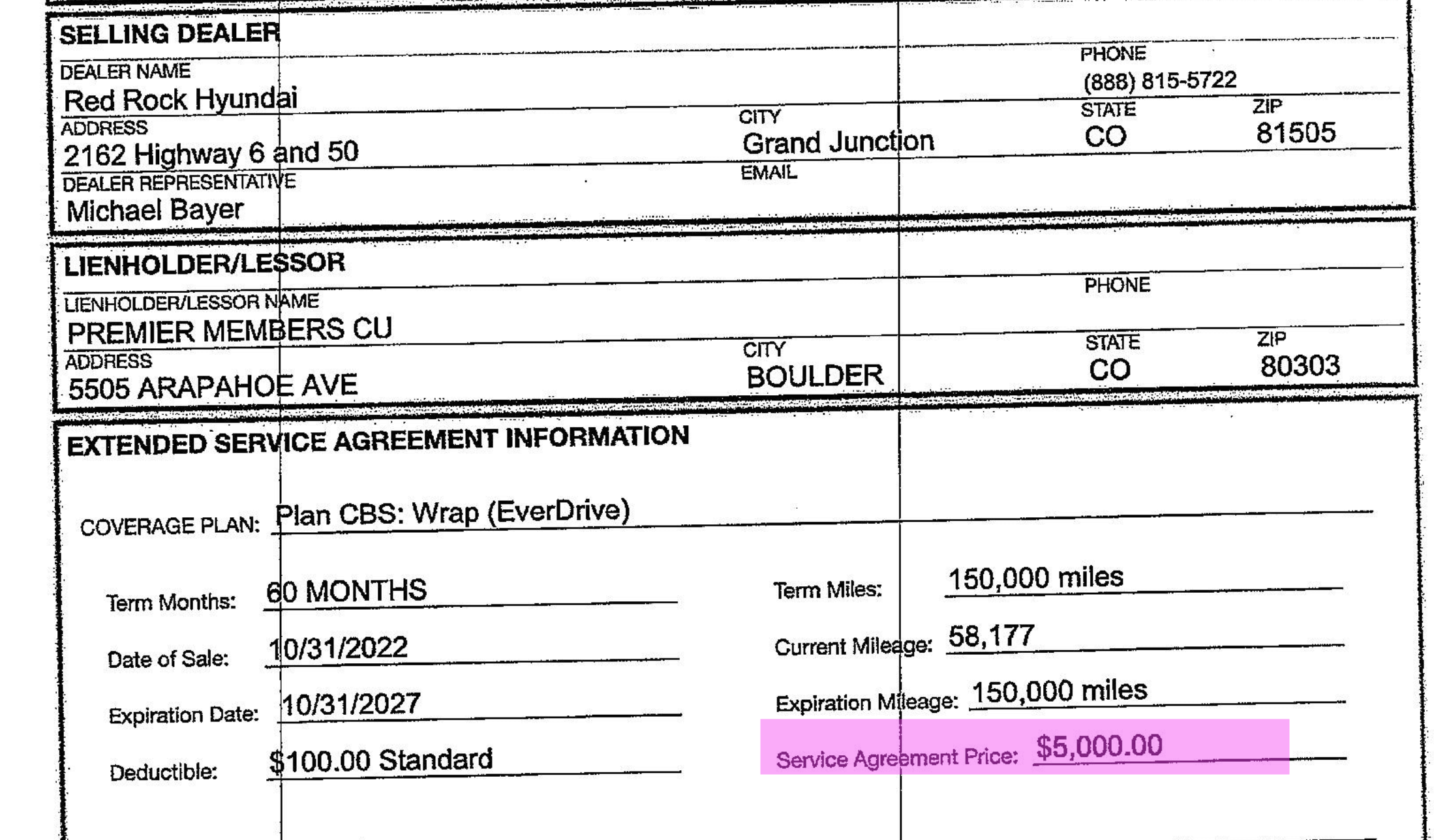 The $5,000 charge for “Portfolio,” the dealership’s name for a proprietary extended warranty. The customer was unaware that the $5k charge had been added to his original contract.

The customer says the dealership has “taken care of everything, really,” and he is now completely happy with his deal, but he also confided that in the course of offering these concessions, the general manager of the dealership pressured him to ask AnneLandmanBlog to take down the December 29 article about how the way he had been treated, and especially the part where he had accused them of forgery. The customer told AnneLandmanBlog that the manager even threatened that they “were going to take the blog to the police and report us for saying they forged the documents.”

It emerged recently that forgery has apparently been an issue at Red Rock dealerships for some time, with others, both customers and employees, reporting they have encountered it.

The customer in this case told AnneLandmanBlog in a conversation on 12/28,

“I know for a fact I didn’t sign these two papers, so I believe they just traced my signature off of another paper, considering I’ve got a very simple signature, so it would’ve been really easy for them to do, so they did. They took advantage of that, they just took advantage of the entire situation, of me being a young kid, my grandma not being there…”

He also told AnneLandmanBlog that since having this experience, he has changed the way he signs his signature, to make it harder for it to be forged.

Beyond that, it’s difficult to believe a 21 year old just starting out in the western Colorado job market would agree to buy a $5,000 extended warranty AND a $4,000 Resistall coating when purchasing a used vehicle, particularly with his grandma as co-signer.

…but people shouldn’t have to encounter illicit or deceptive behavior during a transaction for a vehicle at these dealerships at all, and once they discover that they have, they should not have to endure a months-long, stressful, nightmarish struggle to finally get a fair deal, like this and other customers have had to do.

Instead, a better idea would be that these dealerships start carrying out every single transaction fairly and with total honesty and transparency from beginning to end, instead of putting people in our community through these awful experiences.

As long as these dealerships’ illicit behaviors keep coming to light, AnneLandmanBlog will keep telling the western slope community about them. It’s only fair that customers know the tricks and deceptions they must be watchful for when doing business with these places. Otherwise, consumers won’t get a level playing field at these dealerships.

If you have been tricked or deceived by these dealerships, they are now attempting to make it right, but they can’t help you if they don’t know about you.

Here is the contact information for who to tell your story to, to ask that you be made whole:

13 comments for “Update: Customer gets satisfaction from Red Rock Hyundai after bad deal is exposed; dealership wants blog about his experience taken down”